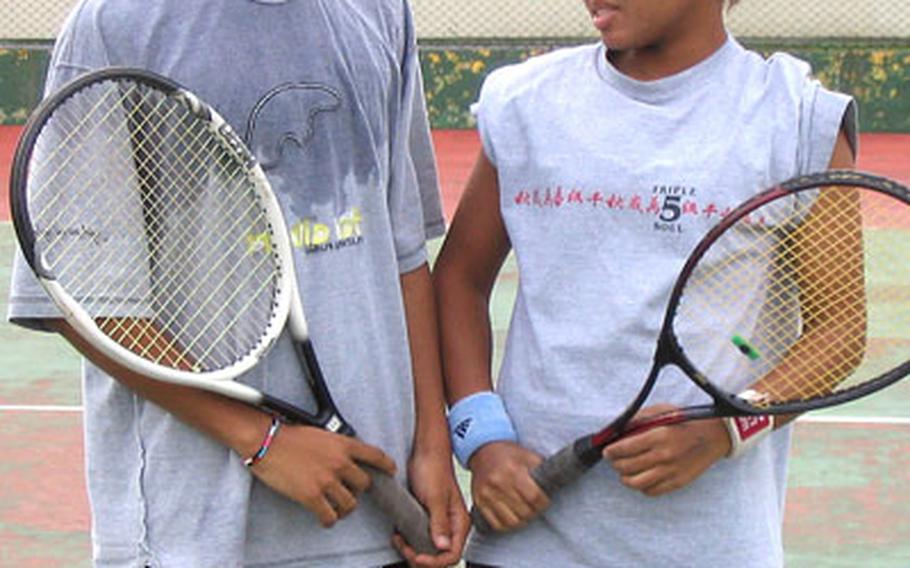 Mary and James Edwards have kept tennis in the family since they picked up rackets as seventh graders. This year they would like to keep Far East tennis medals in the family, as well.

They have experienced limited success in their careers representing tiny Pusan American School, winning occasional matches against small-schools opposition but finding it more difficult against their large-school opponents in Seoul.

Both have beaten the top singles seeds at Osan American, Taegu American and International Christian-Seoul. Both have 3-0 records, the best among Department of Defense Dependents Schools players.

Now, James, a junior, and Mary, a senior, have even loftier goals: Korean-American Interscholastic Activities Conference individual championships, maybe even a Far East tournament family double next month at Kadena Air Base, Okinawa.

Their early-season success has surprised even their coach, Lydia Fleischer.

Fleischer was speaking specifically about a change in both players&#8217; styles and substance, a maturing of their games that has both emphasizing placement over power.

What do the players think?

Says Mary, who attended tennis camps this summer, &#8220;I put more emphasis on speed, getting to the ball faster. I move around the court faster, chasing down every single ball. ... My ball placement has improved. Before, I was trying to hit the ball with a lot of force, but I learned over the summer that it&#8217;s more important where I put the ball.&#8221;

He also absorbed lessons from last year&#8217;s defeats against some of South Korea&#8217;s toughest competitors.

But Mary and James both quickly point out that they have yet to face stronger international and DODDS opposition in Seoul.

Lifelong residents of Pusan and Camp Hialeah &#8212; their father, J.C., a retired Army sergeant major, has worked at the Pusan Storage Facility for 18 years &#8212; Mary and James say they depend on each other for practice, honing their game, even encouragement.

&#8220;He has the power, the strength, the speed, I totally look up to him and try to make my game like his,&#8221; said Mary, who practices about three hours daily.

James calls himself an &#8220;in-season&#8221; tennis player and prefers basketball, his winter sport. But he says he gets more from practicing with his sister than anything else in tennis.

Even though Far East will not feature some of last year&#8217;s top players, Mary and James refuse to take anything for granted.

Looming in the way of Mary&#8217;s title bid is sophomore Amy Lopes of Kadena, who finished fourth last year and beat Edwards 6-1, 6-0 in the third round.