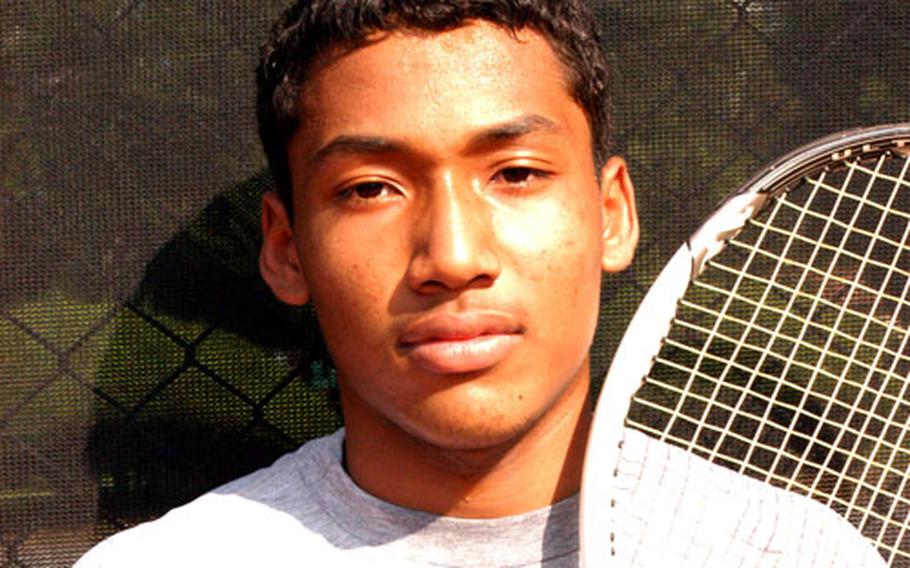 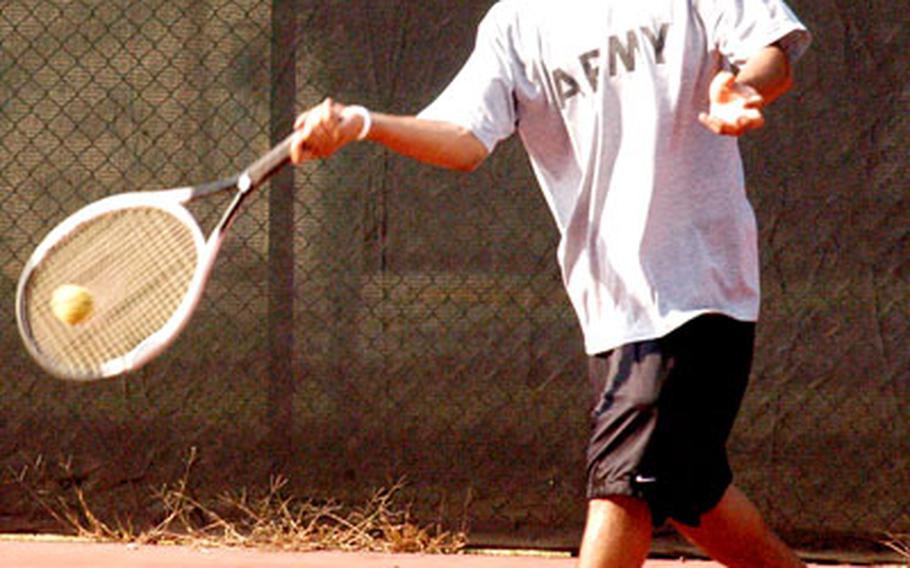 Edwards prepared to defend his Far East titles by practicing his ground strokes over the summer. (Galen Putnam / Special to S&S)

James Edwards, defending Far East Tennis Tournament singles and mixed doubles champion, feels that distinction all too well. The Pusan American senior feels, at times, as if he&#8217;s carrying a bull&#8217;s-eye on his chest and back.

Edwards had the advantage a year ago of coming pretty much out of nowhere, a champion in Korea, but an unknown quantity heading into the Far East tournament on Okinawa.

Edwards, behind a powerful serve and forehand and a fearless net game, bulldozed through the singles field and captured the boys singles title, ending an 11-year title drought for Pusan American.

He also teamed with his sister Mary to win the mixed doubles, a first-time event in the Far East tournament, which became a DODDS-only affair last year.

How is he holding up, knowing he won&#8217;t be surprising anybody this season?

&#8220;People know that maybe they have to beat me to make it to the finals, if they have to play me,&#8221; Edwards said, which can be a good and bad thing, either serving as a motivator to do better or becoming a source of overconfidence, which he says he&#8217;s striving to avert.

Though he still considers basketball his No. 1 sport, having won Far East made tennis &#8220;a much higher priority,&#8221; he said.

Over the summer, he said, he worked on his game, specifically addressing what he and opposing players and coaches said was a potential weakness: his backhand, particularly on serve.

Clausen&#8217;s help has been invaluable in other areas as well, Edwards said.

For his part, Clausen feels Edwards has stepped up his play and is keeping his focus on the right things.

Edwards got a late start in preparing for his title defense, since the Panthers weren&#8217;t scheduled to play until Sept. 23.

Edwards admitted to being a bit antsy over the waiting.

He opened strongly, beating Ryan Park of International Christian-Seoul in two matches on Sept. 23, then topping Hyun-min Kim of Taegu American 8-5 on Sept. 28. Kim finished fourth at Far East last year, and Edwards said he knew he&#8217;d be in for a tough battle.

And the road ahead might be even tougher, given that Edwards and the Panthers must travel to Seoul this weekend for a rematch with Allen Chin, whom Edwards beat in last year&#8217;s Far East championship.

That&#8217;s fine with Edwards. The tougher the opposition, the better.

&#8220;I really want to play [Chin] and more international schools, just to be challenged, have a decent match and learn,&#8221; Edwards said.

Whether on Saturday, the KAIAC tournament or at Far East, what does Edwards expect in the rematch with Chin?

And what about the possibility of Kadena&#8217;s Anthony Soroka or another contender such as Eric Su of Nile C. Kinnick in Japan, players he won&#8217;t see until Far East?

&#8220;I just want to defend and hopefully repeat as champion. I also want to win KAIAC. It would be nice to play and beat the best in Korea as well as Far East, and to win in my last year, that would be fun.&#8221;