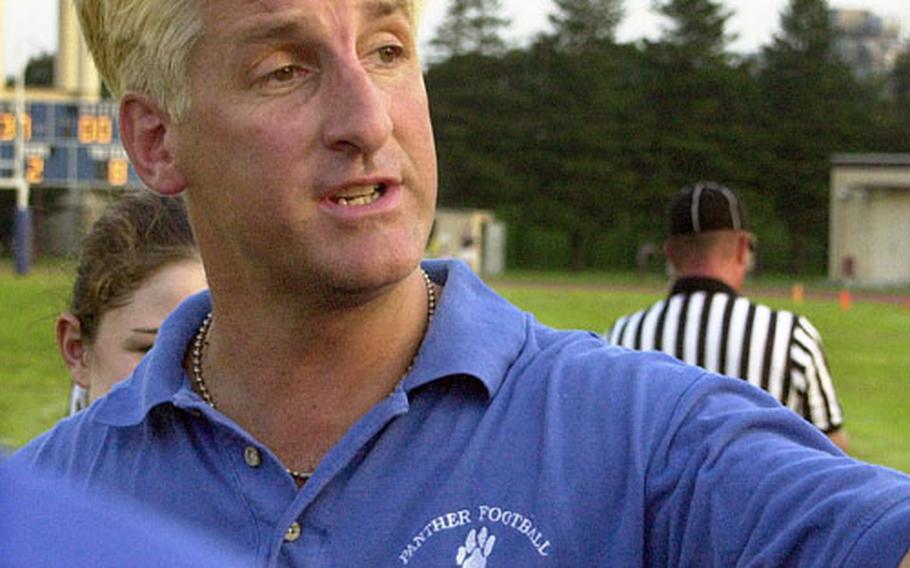 Coach Tim Pujol completed his fifth year at the helm of the Yokota Panthers. None of his predecessors have debuted as successfully as he has: 39-game winning streak, five-time defending Kanto Plain Association of Secondary Schools and Japan Football League and four-time Rising Sun Bowl champion Yokota Panthers. (Dave Ornauer / S&S)

On a shelf in Tim Pujol&#8217;s home near Yokota Air Base sits an old football.

Scrawled on the aging leather surface are final scores from the 1973 season &#8212; the first in Yokota High School history.

It was a 6-0 season, the first in a long line of Kanto Plain Association of Secondary Schools titles that have become symbolic of the Panthers&#8217; winning tradition.

Following in the footsteps of Dave Morris in the 1970s and Bud Blevins in 1980s, Pujol has developed a style of his own that has made him even more successful than his predecessors.

Has he created a football dynasty?

Given the shape Yokota football was in before he arrived in the summer of 1999, an 11-31 record since its previous Kanto title in 1993, it could be argued Pujol is responsible for the turnaround.

Opposing coaches have found Pujol and Yokota a nearly impossible combination to beat.

A winning tradition builds on itself, adds Brian Wetherington of Okinawa&#8217;s Kadena Buccaneers, who have lost to Yokota twice in the Rising Sun Bowl.

The expectations were lower when Pujol came aboard.

A 1986 graduate of the University of Texas, where he played football, Pujol began his coaching career as an assistant at John H. Reagan High in Austin, Texas, for two seasons.

He arrived in the Far East as coach of Taegu American and served as the school&#8217;s athletic director before transferring to Yokota in 1999.

Pujol had heard much about the Panthers&#8217; winning tradition. But he inherited a squad that had gone 1-17 the previous two seasons.

Pujol had reason to feel otherwise, after meeting defense and line coach Matt Grant, who had the players on a summer weight and conditioning program. Pujol also notes the positive influence of assistants Willie Spears and Donnell Daniel.

The victory was the first in a season that finished 7-3 and with a 19-14 loss to the Kubasaki Samurai in Okinawa&#8217;s first Rising Sun Bowl.

A speed bump at the start of the 2002 season, which forced Yokota to forfeit two games for using an ineligible player, simply lit a fire under his team, Pujol said.

Faced with what appeared to be a rebuilding campaign, with 21 out of 28 players gone from the 2002 team, the Panthers got a late infusion of talent &#8212; Roy Roach and his younger brother, junior Chris Roach from Virginia just in time for the start of the 2003 campaign.

&#8220;Our season would have evolved differently,&#8221; Pujol said of not having the Roaches.

Shawn Novak, a junior, tried his hand at quarterback this year for the very first time.

Chris Roach will likely be the featured back, with Ben Atuaia or Kenny Harris at fullback.

But there&#8217;s not much focus on the on-field winning streak, he said.