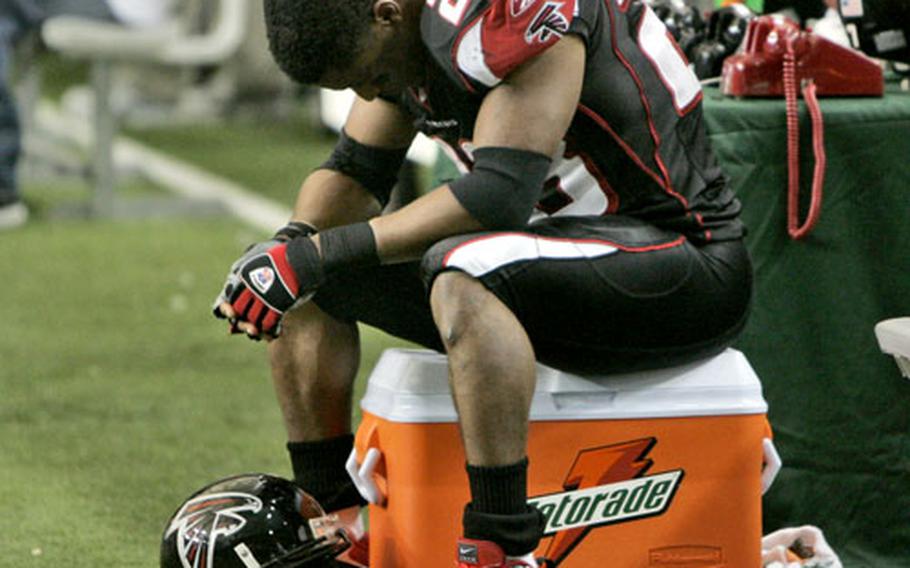 Atlanta Falcons’ Warrick Dunn sits on the sideline during the final seconds of the Falcons’ 31-13 loss to the New Orleans Saints on Sunday in Atlanta. (John Bazemore / AP)

The NFC playoffs should be interesting this year, if only because few of the teams in the conference seem to want to earn their postseason berth.

After Sunday&#8217;s games, only six teams in the conference had winning records &#8212; and three of them lost on Sunday. Three other NFC teams entered the day with a chance to get above .500 but each lost and fell to 5-6.

The New York Giants and Carolina Panthers, co-leaders in the wild-card pack, looked just a few weeks ago like they could go deep in the playoffs. They lost to Tennessee and Washington, respectively, teams that had only three victories each coming into Sunday.

New York led 21-0 early in the fourth quarter but unraveled to lose its third straight.

The Atlanta Falcons, like the Giants, show all the signs of a team falling apart after another second-half collapse led to a fourth straight loss. Atlanta was 5-2 before it hit the skids.

Chicago (9-2) is clearly the NFC&#8217;s top team, but lost to the New England Patriots on Sunday in another game in which Rex Grossman turned the ball over with regularity.

Dallas (7-4), looks like a dominant team despite only two victories over opponents with winning records.

Someone will earn those four NFC division titles and two wild-card spots, of course. But it&#8217;s looking likely that at least one will limp into January with an 8-8 record.

This isn&#8217;t completely new: Just two years ago the NFC sent two 8-8 teams into the postseason. The only time a team with a losing record has made the playoffs was 1982, when the Cleveland Browns and Detroit Lions, both 4-5, advanced after the strike-shortened regular season.

The AFC, which could have a 10-6 team miss the playoffs for the second year in a row, has been the stronger of the two conferences for several years. The NFC is just 20-32 against the AFC this year.

Both of the losses this year for the Bears have come against the AFC. Kansas City is 3-4 against AFC opponents but in the playoff hunt because of their 4-0 record against the NFC.

The Panthers are one of only two NFC teams with winning records against the AFC (Dallas is the other).

Only a few interconference contests are left this season &#8212; the Panthers and Seahawks are the only two teams with winning records in the NFC who will have to face AFC opponents down the stretch.

That gives a big advantage to the Bears, Cowboys, Giants and Saints, who will all get to beat up on their failing NFC brethren as they fight for seeding in January.

The game of the week also was the sloppiest contest on Sunday, with the teams combining for five interceptions and three fumbles. Bears QB Rex Grossman had more tackles (one) than touchdowns (zero) and Patriots QB Tom Brady played only slightly better.

On Thursday at 2 p.m. CET, AFN Sports will show the Titans improbable comback over the Giants. Most of the excitment in this game came in the fourth quarter, with two messy interceptions by Giants QB Eli Manning and a host of clutch passes and scrambles by Titans rookie QB Vince Young.

For fans with insomnia, on Friday morning at 2 a.m., AFN Sports will carry the Ravens-Bengals game live.

Looking aheadNext week&#8217;s slate of games could determine several division winners, starting with that Thursday night match-up between the Ravens and Bengals.

A win by the Ravens would give them a four-game lead in the AFC North with five games left, and a season sweep against Cincinnati.

On Sunday, a victory by the Bears at home over the Vikings would clinch the NFC North for them, and a Colts victory in Tennessee would hand them the AFC South.

The Cowboys will face off against the Giants late Sunday in a game that won&#8217;t finalize the NFC East, but will likely give one team a huge advantage.

If the Cowboys prevail, they&#8217;ll have a two-game lead. If the Giants win, they&#8217;ll not only catch up in the standings, but also hold all the tiebreakers if the two teams finish with the same record.

Two of these nine teams will claim wild-card spots for the NFC playoffs: