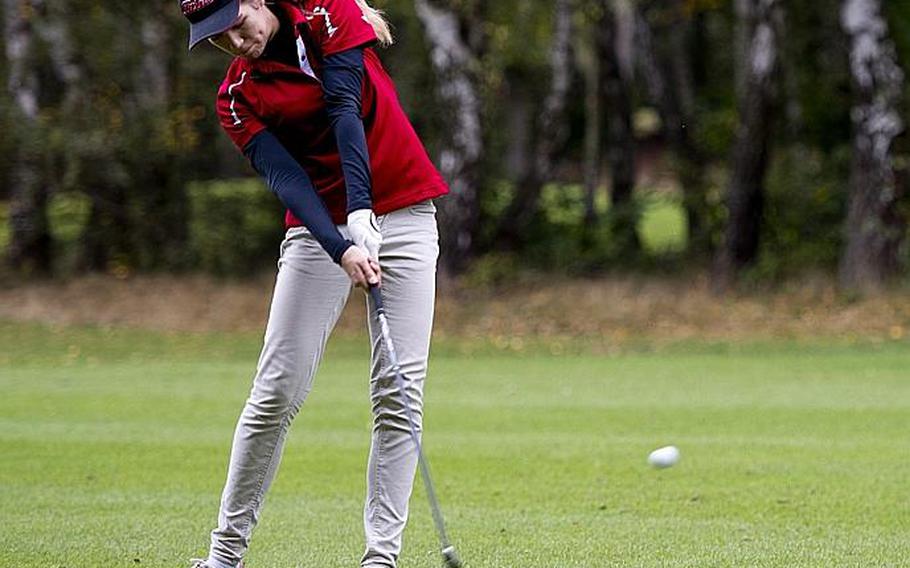 Kaiserslautern's Jasmin Acker takes a shot from the fairway during the DODDS-Europe golf championship at Rheinblick golf course in Wiesbaden, Germany on Oct. 8, 2015. Acker was selected as the 2015 Stars and Stripes girls golf Athlete of the Year. (Michael B. Keller/Stars and Stripes)

As the 2015 DODDS-Europe girls golf season dawned with a vacancy atop the leaderboard, Kaiserslautern’s Jasmin Acker recognized her opportunity. And she planned to seize it emphatically.

Or at least as emphatically as the subdued, soft-spoken sophomore could manage.

“I didn’t finish terrible last year,” Acker recalled thinking before the season opened in September. “I have a chance if I can keep my head straight.”

In fact, Acker had a great chance. She finished third as a freshman, well behind conquering senior champion Jenna Eidem of Wiesbaden but just a stroke shy of fellow freshman Leigha Daryanani of Bitburg. The two returning favorites figured to battle it out for the right to replace the NCAA-bound outgoing champion.

And so they did. Acker built a six-point lead over her rival through 18 holes, good enough to withstand Daryanani’s rally over the tournament’s second and final round. Acker was a first-time European champion.

Now she is also the 2015 Stars and Stripes girls golf Athlete of the Year.

As she’d predicted, all she’d had to do was keep her head straight – a feat she accomplished, for the most part.

As it turns out, she had to. At the end of a laid-back fall through which Acker cruised largely unchallenged, the European tournament represented a sudden spike of that particular phenomenon.

“The entire season, I didn’t have too much competition,” Acker said of the thin DODDS-Europe girls field. “Then you come to Euros and all the good people are here.”

The pressure escalated further over the final 18 holes as a resurgent Daryanani made a late run at negating Acker’s substantial clubhouse lead. But Acker persevered, turning in a solid 30-point round to secure a 66-62 win in the event’s modified Stableford scoring system.

“I think the nerves got to me,” said Acker, who expects to spend her last two years of high school at Kaiserslautern. “I think that kind of messed me up today.”

If this is what a messed-up Acker is capable of, just think of the chance she’ll have next year.