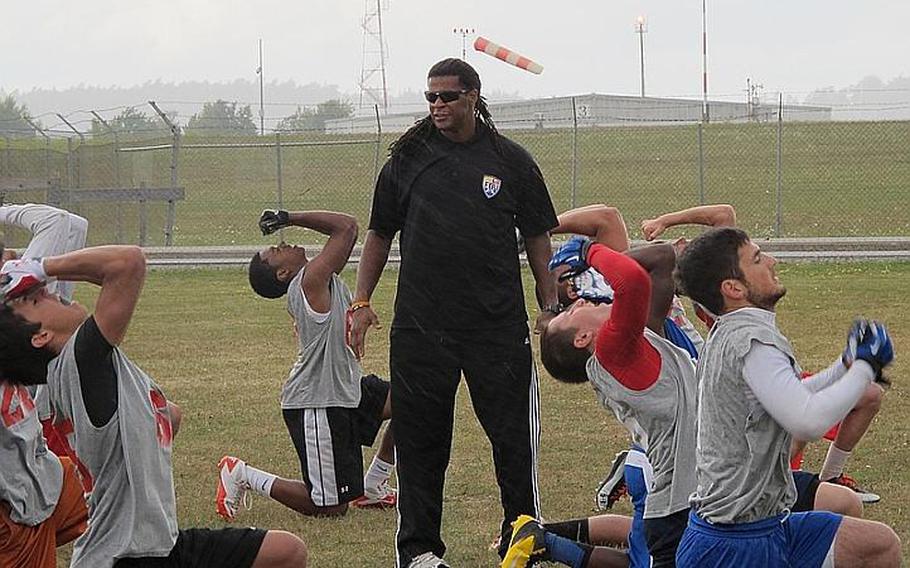 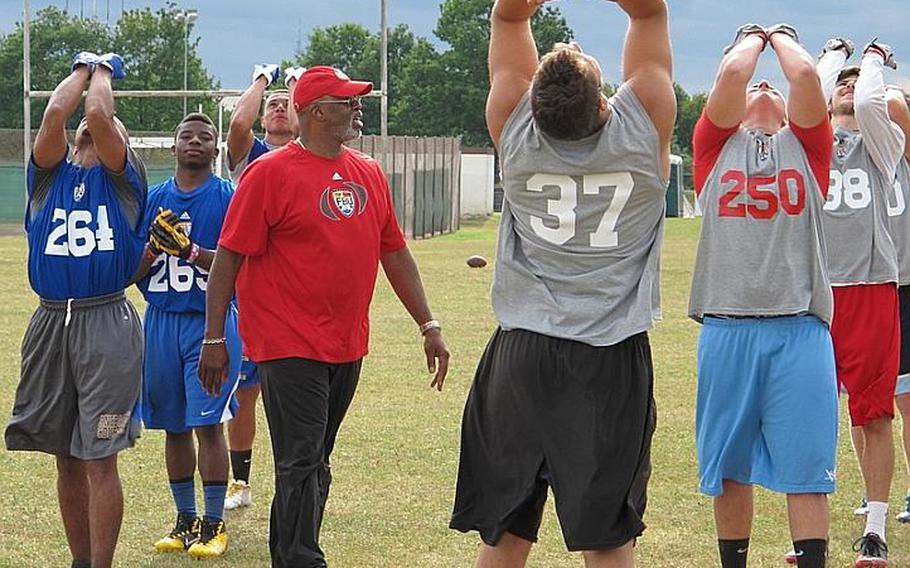 Football University clinician Thurmond Moore, a former college and NFL coach, puts players through his drill at a tackling clinic he conducted Sunday at Ansbach, Germany. (Rusty Bryan/Stars and Stripes)

ANSBACH, Germany &ndash; The attendance was sparse but the intensity thick Sunday afternoon when 17 Europe-based gridders attended a Football University combine and clinic under the tutelage of two NFL alumni.

According to FBU&rsquo;s international recruiting director Steve Quinn, the purpose of the combine, one of five scheduled for Europe this month, was to identify candidates for FBU&rsquo;s initial Team Europe all-star team. The plan is that Team Europe will play all-stars from other nations in games scheduled for January as part of the organization&rsquo;s annual U.S. Army All-American Bowl activities in San Antonio, Texas &ndash; FBU&rsquo;s &ldquo;Top Gun&rdquo; program.

&ldquo;We had seven clinics in Europe last year,&rdquo; Quinn said, &ldquo;and we determined there was enough interest and talent to put together a team from Europe.&rdquo;

Although just 17 players, most of them from German and Austrian clubs, attended the combine here, Quinn said they included a handful of prospects for Team Europe. He said FBU identified a core of 12 players for the first Team Europe from a combine in the U.K. last spring, and added four more from Saturday&rsquo;s sessions in Hanau. FBU traveled to the Netherlands on Monday and was to conduct further sessions in Brussels on Tuesday and Bristol, England, on Wednesday.

Sunday, six players were identified as Team Europe prospects, five of them from Austria and one, dual-citizen David Vidovic, a sophomore running back from Hohenfels. Vidovic, a 5-foot-11-inch, 175-pounder, was named co-MVP of the combine.

All of them no doubt will be hoping for exposure such as that earned by Briton Alex Jenkins, who, Quinn said, received offers from several NCAA Division I schools based on his Top Gun performances last year.

College offers, however, are just the icing on the cake, according to Quinn.

FBU, which bills itself as offering instruction &ldquo;by position, by professionals and by invitation only,&rdquo; is more concerned with coaching than recruiting.

Sunday&rsquo;s event culminated in an hour-long clinic on tackling technique devised and conducted by former NFL coach Thurmond Moore, who was the defensive coordinator of the Buffalo Bills from 2001-2003 and has served on the staffs of the Rams, Raiders, 49ers and Cardinals in addition to several colleges. Moore is director of FBU&rsquo;s Tackling Academy, which promotes techniques designed for safer and more effective methods of bringing down the ball carrier.

Moore was assisted in his instruction by Cecil Martin, a former Wisconsin Badger who played fullback for the Philadelphia Eagles and now furnishes color commentary for Sky Sports&rsquo; NFL telecasts in addition to his duties with FBU.

&ldquo;I love doing this,&rdquo; Martin said as he helped guide the players through drills designed to help them focus on using their lower bodies as the source of power to make the tackle.

&ldquo;It was great,&rdquo; said Ansbach sophomore running back Dorian Jones about the unusual drills. &ldquo;I got better and everybody got better.&rdquo;