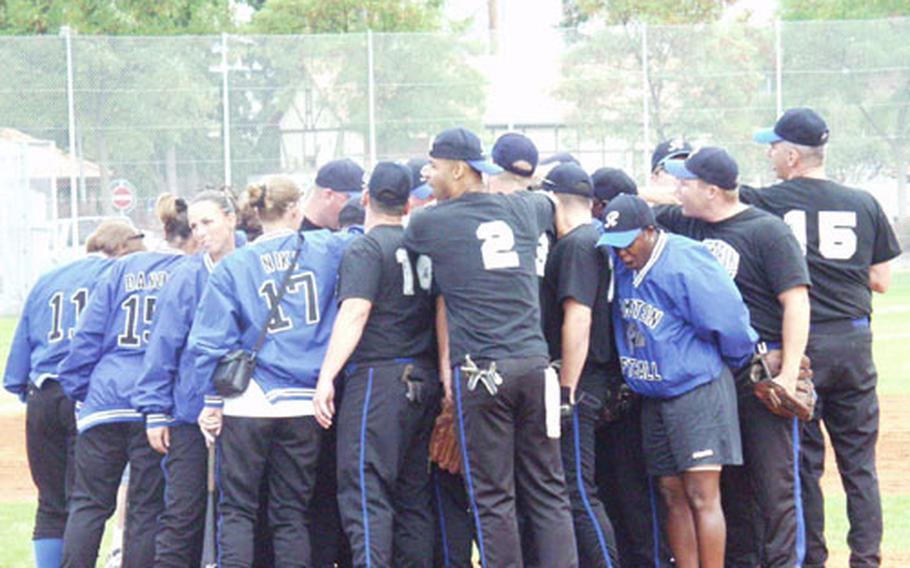 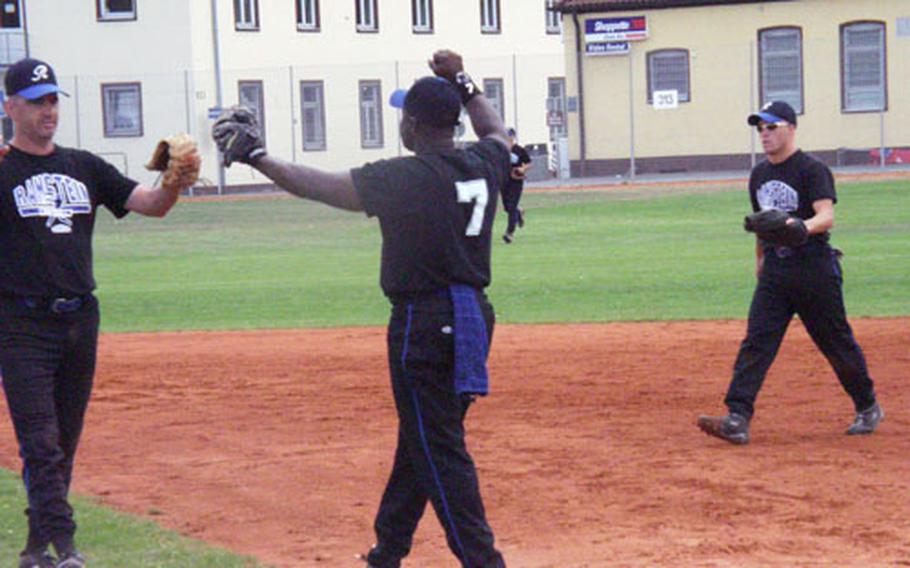 Ramstein pitcher Tim Snyder (left) and first baseman Ike Rivers touch gloves in celebration Sunday after the USAFE champion Rams added the U.S. Forces-Europe title to their resume with a 16-15 victory over Spangdahlem in Sunday&#39;s championship game of the 2003 Army-Air Force Final Four tournament. Rivers, who&#39;s ending his 13-year stint as a USAFE athlete after the game, is handing over 2004 managerial duties to Snyder. (Rusty Bryan / S&S)

And when they were over Sunday, they had become an all-Ramstein affair as the Rams&#8217; men and women completed unbeaten runs through the double-elimination event to claim the titles.

The women got things started with a 10-7 victory over the Spangdahlem Lady Sabers, and the men followed with a 16-15 win over Spangdahlem in victories that duplicated the outcomes of last month&#8217;s USAFE championships in Aviano, Italy.

Pinch-hitter Cam Engelman lashed a scorching ground ball off the glove of diving Ray Delgado to drive home Donnie Patrick and break a 15-15 tie in the bottom of the sixth. Pitcher Tim Snyder retired Spangdahlem in order in the top of the seventh to make the run stand up.

Scoring the decisive run was a fitting ending for Patrick, who opened Ramstein&#8217;s scoring with a two-run homer in his first at-bat of the day, which happened to be his 40th birthday.

In addition to Patrick&#8217;s blast, Ramstein, which scored in every inning, also got home runs from Chris Spelling, Nathan Tarkowski and Chris Young.

Brian Whelan stroked a pair of home runs in that game, including one in a decisive seven-run seventh. Lloyd Oxford, Pat Boot and Woodrow Wilson also went deep in the game, and Wilson added a pair of triples and a single in a 4-for-4 effort.

The Sabers continued playing long ball in the title game, with Delgado connecting for three homers in consecutive at bats in the fourth, fifth and sixth. Delgado&#8217;s two-run shot combined with a two-run homer by Jeff Dahlke and a solo homer by Edward Jett in a six-run sixth that tied the game at 15.

Ramstein&#8217;s title serves as a farewell gift for Rivers, who&#8217;s leaving for an assignment at the Pentagon after spending the last 13 years as a USAFE athlete.

Ramstein pushed across a pair of runs in the bottom of the sixth after Spangdahlem had closed to 8-7, then held the Lady Sabers scoreless in the final inning to nail down the title.

Nikki Evenson, Corinna Vierya and Melissa Ray each went 2-for-3 for the Ramstein.

Spangdahlem rebounded from Saturday&#8217;s loss to eliminate Army champion SHAPE 20-6 in Sunday morning&#8217;s losers-bracket final. The Lady Sabers, who got 3-for-3 performances from Angie Campbell and Sarena Paulson posted a six-run first inning to get the mercy-rule rout started.