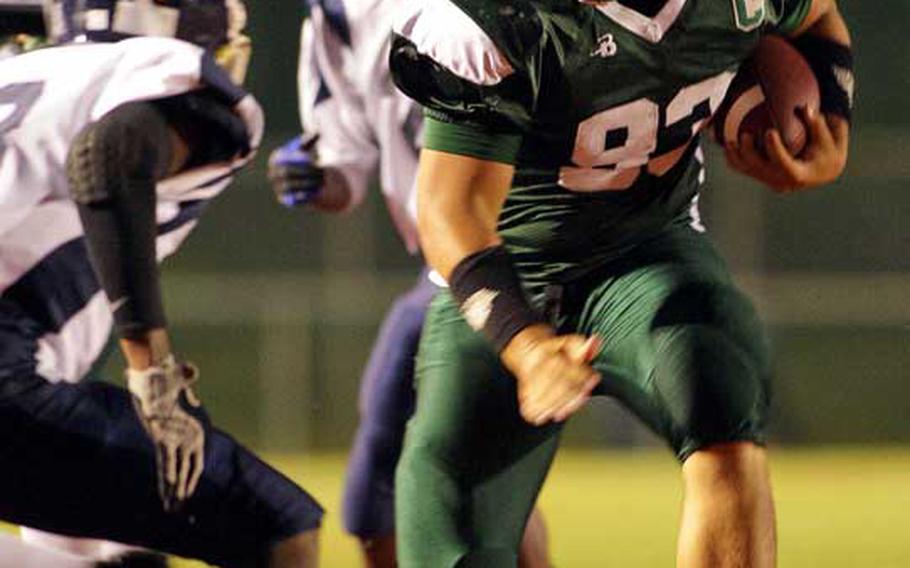 Buy Photo
Daegu American running back Jarel ''Tank'' Connie has gained 472 yards and rushed for six touchdowns on 56 carries, providing what coach Ken Walter calls a "new dimension" for a Warriors team thought to live and die with its spread option offense. (Gary Cashman/Special to Stars and Stripes)

Buy Photo
Daegu American running back Jarel ''Tank'' Connie has gained 472 yards and rushed for six touchdowns on 56 carries, providing what coach Ken Walter calls a "new dimension" for a Warriors team thought to live and die with its spread option offense. (Gary Cashman/Special to Stars and Stripes) Buy Photo
Zama American running back Andre Encarnacion has rushed for 389 yards and six touchdowns on 54 carries, providing a different look for a Trojans team built around senior Michael Spencer and the team's intricate Wing-T ground attack. (Dominic Labrador/Special to Stars and Stripes)

That is, until you factor in the weapons each team sports at fullback: Warriors senior Jarel &ldquo;Tank&rdquo; Connie, a lineman up until this season, and Trojans sophomore lineman-turned-fullback Andre Encarnacion.

Each brings what each team&rsquo;s coach calls a &ldquo;new dimension,&rdquo; Connie to a Daegu squad thought to live and die with its spread option, and Encarnacion to a Zama team built around senior Michael Spencer and its ground-oriented Wing-T package.

Connie&rsquo;s presence has thrown off teams Daegu has played, because &ldquo;they&rsquo;re not used to a power back coming out of the spread,&rdquo; Warriors coach Ken Walter said. &ldquo;Now, we&rsquo;re able to go at them. We&rsquo;ve been working on that.&rdquo;

Connie (472 yards, six touchdowns, 56 carries) and Encarnacion (389, 6, 54) and their teams will tee it up at 6 p.m. Saturday in the sixth Division II title game, at Zama American&rsquo;s Trojans Field.

While Merrell feels neither his nor Walter&rsquo;s philosophies have changed, the big, beefy backs &ldquo;give added, extra dimension, a big man running at you, something else to be concerned about.&rdquo;

How does Zama go about beating Daegu? &ldquo;We need to be concerned about their passing game, but they also know how to run out of their spread sets,&rdquo; Merrell said. &ldquo;With Daegu spreading the field, we have to be ready for everything.&rdquo;

Likewise, Walter hopes the addition of Connie and a change in defensive sets will help the Warriors better control the interior and at least slow down Spencer and Encarnacion. &ldquo;I think we&rsquo;ve got a pretty good shot this year,&rdquo; he said.

The Division I playoffs pit teams that are familiar with each other:

 Kadena lost at Seoul American in the 2006 and &rsquo;08 Division I title games, but the Panthers have beaten the Falcons twice on Okinawa, including a 57-0 thrashing on Sept. 3.

&ldquo;It&rsquo;s a whole new season,&rdquo; Kadena coach Sergio Mendoza said, adding that he expects to see a Falcons team that has grown over the season. &ldquo;We&rsquo;ve completely erased the (regular) season for us. None of the games that we&rsquo;ve played matter now.&rdquo;

Likewise, Falcons coach Billy Ratcliff said the same is true for the Panthers, who bring their running back tandem of Shariff Coleman and Thomas McDonald to the table and have also grown over the season.

Yokota coach Tim Pujol&rsquo;s challenge will be to contain a two-pronged Kubasaki offense featuring the Cristian Rivera-to-Brandon Crawford passing package along with running back Deon Lewis.

&ldquo;Take care of the football, minimize penalties and if we can do that, we&rsquo;ll give ourselves the best chance to win,&rdquo; Pujol said.