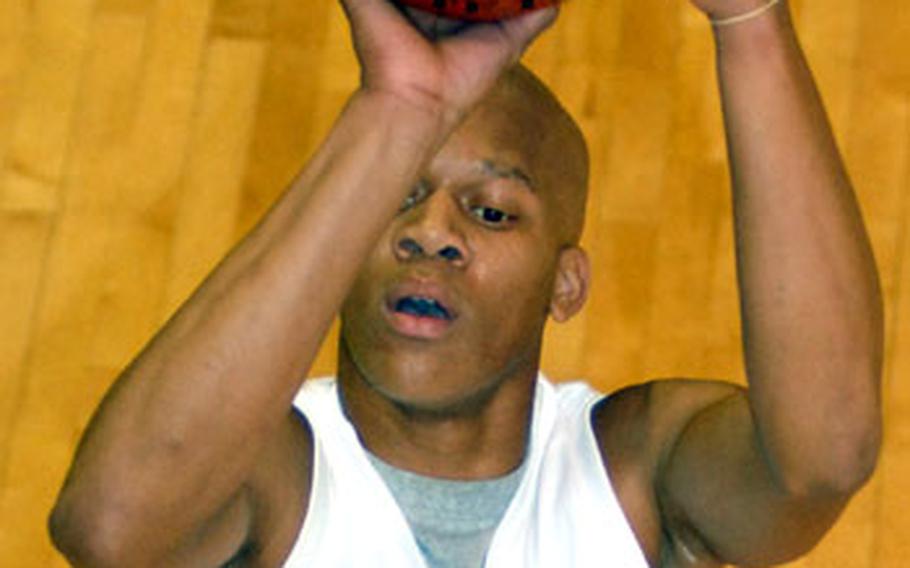 OSAN AIR BASE, South Korea &#8212; Growing up in Lake Alfred, Fla., Marcus Polarchy envisioned playing basketball as an adult &#8230; but not where he&#8217;s been playing the past year.

From Camp Henry in Daegu, South Korea, to Mons, Belgium, and many points in between, Polarchy has logged oodles of frequent flier miles toiling as a swingman for the All-Army and All-Armed Forces teams.

Polarchy spoke about his experiences of the past year during this week&#8217;s 21st Osan Pacific-wide Open Holiday Basketball Tournament here.

He played ball for his hometown Auburndale High School and also a season for Polk Community College in Florida before joining the Army.

After arriving in South Korea almost a year ago, he quickly established himself with Daegu of the nine-team post-level Korea Traveling League.

Polarchy applied for the All-Army tryout camp in October at Fort Bragg, N.C., and made the team. That was the start of his journey &#8217;round the military basketball world.

Next stop the first week of November was Marine Corps Air Station Cherry Point, N.C., for the All-Armed Forces tournament. Polarchy and the All-Army team finished third behind the Marine Corps and two-time champion Air Force.

Then came selection to the All-Armed Forces team. That meant a journey to Kaiserslautern, Germany, for two weeks of rigorous training for last month&#8217;s Supreme Headquarters, Allied Powers Europe tournament at Mons.

Still, Polarchy viewed the chance as a &#8220;wonderful experience,&#8221; citing the bonds he made with his Army and Armed Forces teams as the best part of everything.

Polarchy also took back to Korea with him a hunger to improve on what&#8217;s becoming a frustration &#8212; Team USA has finished third in the SHAPE tournament the last three years, after taking gold in 2004.

&#8220;I felt we were the more athletic and quickest team there,&#8221; Polarchy said. Adjusting to international rules, not used at Armed Forces and to which European teams are already accustomed, &#8220;made a difference,&#8221; Polarchy said, in Team USA&#8217;s 70-67 semifinal loss to Lithuania.

His Daegu team, 1-5 so far this season, still has six weeks of play left in the KTL, followed by the Korea-wide post-level tournament in February at Yongsan Garrison.

Polarchy will then return to the States for the International Military Sports Council tournament in April at Fort Hood, Texas. Then there&#8217;ll likely be a return engagement with All-Army camp next fall, hopefully leading to another shot at a SHAPE tournament title next November.