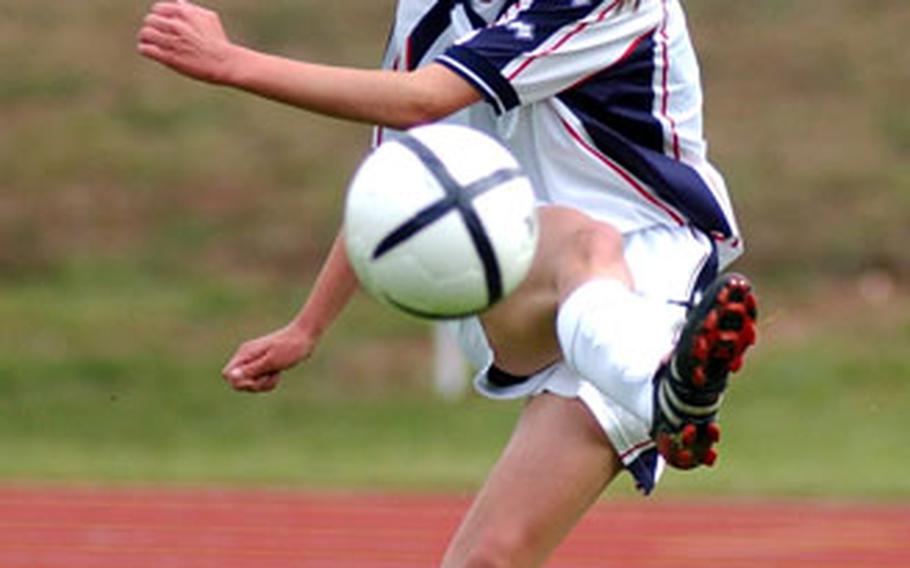 Aviano’s Anna Schrader takes a shot on goal at the soccer finals in Ramstein last month. She was named to the 2006 DODDS All-Europe girls soccer team. (Michael Abrams / S&S)

For a roster that&#8217;s nearly half sophomores, the 2006 girls All-Europe team has plenty of experience.

Avianos scoring machine Anna Schrader and Heidelberg defensive anchor Ana Anger, both among the seven sophomores on the team, lead a group of seven repeat choices named by a panel of coaches to the high-school all-star squad.

Joining their younger peers as repeat first-teamers for 2006 are juniors Paris Cervantes of Kaiserslautern, Whitney Lynch of Sigonella and two-time repeater Kylie Marchant of Patch. Seniors Melissa Hirzel of Ramstein and Kyri Bye-Nagel of Hanau, recently voted DODDS-Europe&#8217;s female athlete of the year, also return from 2005, with Bye-Nagel making the team for the third straight year. She was a second-teamer as a freshman.

The first team has just two defenders and no goalkeepers.

Mannheim&#8217;s John Crockett, who served on the selection panel with Ricardo Buitrago of Ramstein, Tom Manuel of Patch, Kathy Clemmons of Hohenfels and Shawn McCarthy of Sigonella, said the offensive tilt was understandable.

There&#8217;s plenty of value up front. Striker Bye-Nagel, with 23 goals despite a game missed because of injury, and fellow striker Schrader, called the &#8220;best player in the Mediterranean&#8221; by coach Pam Hillestad, had 17.

Best in the Med is an assessment that Whitney Lynch and Jaimie Jennett of two-time European Division III champion Sigonella could contest, however. Lynch, who posted a hat trick in the D-3 title game against Hohenfels, scored 13 goals and handed out 13 assists; Jennett scored 18 and helped out on 11 goals.

Also scoring in double-digits was Patch&#8217;s Marchant, who tallied 11 times in making her third-straight All-Europe team, while Heidelberg sophomore Lauren Brousseau, in the words of her coach, Jim McCauley, &#8220;plays at a level that many would consider to be years above her age.&#8221;

And no team in Europe fielded more scoring power and speed than the Kaiserslautern tandem of Cervantes and sophomore Liana Knight.

The All-Europe midfield is in good, if young hands. Ramstein&#8217;s Lauren Williams, a sophomore, is, in the words of her coach, Buitrago, &#8220;the type of player who makes things happen for her team,&#8221; while her teammates Hirzel and Jayci Cachuela, a junior, both had &#8220;tremendous presence on the pitch,&#8221; Buitrago said.

&#8220;Watching Melissa play in the midfield is like watching a painter create a beautiful landscape out of a blank canvas,&#8221; he said.

Even though the defensive side of the ball is sparsely represented on the 2006 team, it&#8217;s effective.

Heidelberg&#8217;s Anger led a defense that allowed just two goals all season; Patch&#8217;s Ciarra McGregor, another sophomore, is the defensive specialist who took on the opponents&#8217; most dangerous scorer.

It&#8217;s a top 15 Crockett thinks would give a good account of itself if ever it took the field.