Playoffs at stake already for many D-II teams 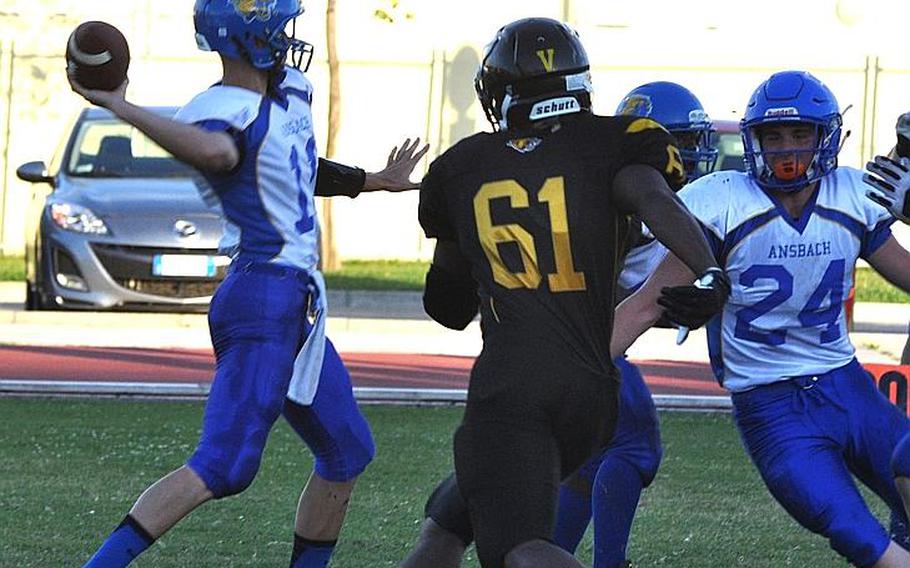 Ansbach quarterback Bailey Ward, throwing here in a Sept. 18 game against Vicenza, and the rest of the Cougars could wrap up a playoff spot with a victory Saturday in their first regional game of the season. Vicenza, on the other hand, might be out of the playoffs if they don't win their regional opener against Naples. (Kent Harris/Stars and Stripes)

The division’s 12 teams played their non-regional games over the first two weeks of the season. Their regional schedule begins this weekend.

But in terms of the postseason, the distinction doesn’t matter.

Despite some shuffling of teams from last year’s 13-school lineup, the intricate points system that determined the eight teams to reach the 2014 playoffs remains intact for 2015. All five regular-season games will count equally under the system, DODDS-Europe Athletic Director Karen Seadore confirmed this week, and the top eight teams regardless of region will advance to the quarterfinals the weekend of Oct. 23-24.

In practical terms, that means the stronger central region, with all four of its teams entering the weekend at 2-0, could gobble up all or some of the playoff spots eyed by teams in the north, which features three winless teams alongside unbeaten defending champ Ansbach, or the south, in which every team is either 1-1 or 0-2.

So while this weekend’s six Division II games aren’t mathematically more or less important than the ones before or after on the schedule, they do represent the crucial midseason tipping points for teams already risking elimination.

The loser of Baumholder’s homecoming date with AFNORTH/Brussels on Friday will fall to 0-3, lock in a losing record and all but fall out of playoff contention. Same goes for Saturday’s Italian battle between 0-2 squads Naples and Vicenza, two 2014 semifinalists staring at a sideline seat for this season’s festivities.

The marquee matchups in the central – SHAPE at Bitburg and International School of Brussels at Rota – will see the two victors clinch winning records and likely assure playoff berths.