Playoff picture should clear up a bit Saturday 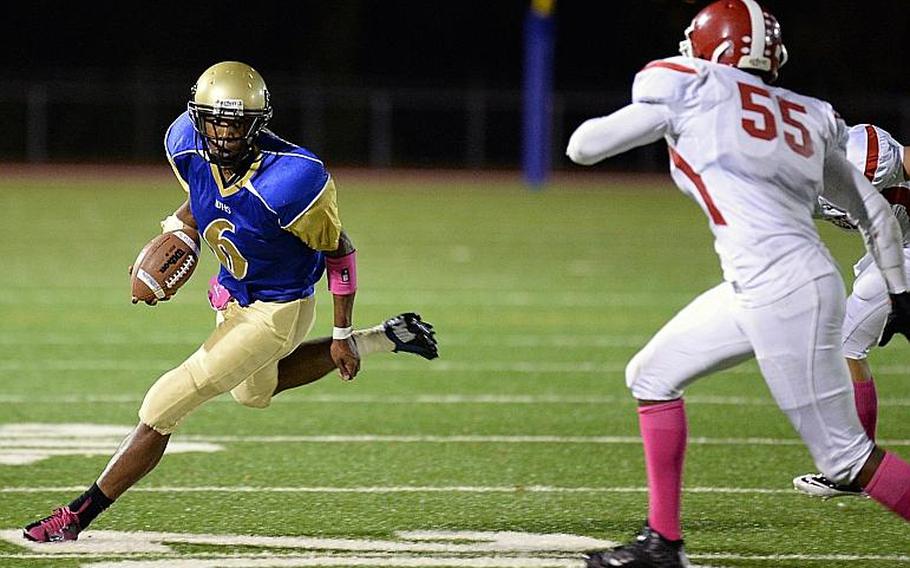 Buy Photo
Wiesbaden's Reymoi Lewis keeps his eyes on Kaiserslautern's Tysean Hendrix as he carries the ball Friday in the Warriors 42-34 home win over the Raiders. The two teams are among those fighting for playoff positions in DODDS-Europe Division I football. (Michael Abrams/Stars and Stripes)

Postseason DODDS-Europe football arrives next weekend with four Division II quarterfinal games, and heats up Oct. 26 with a full slate of season-defining semifinal games. Here’s a look at the playoff system for each division, and the teams that still have a chance to play for a European title Nov. 2 at Kaiserslautern, Germany:

Four of the division’s six teams will advance to the semifinals Oct. 26, with the higher-seeded teams hosting.

Ramstein: The defending champions have yet to be challenged and have clinched their semifinal spot. But the toughest portion of their schedule remains with Wiesbaden and Kaiserslautern on the books.

Wiesbaden: The Warriors clinched their playoff ticket by beating Kaiserslautern. The Saturday showdown with Ramstein is for seeding purposes and bragging rights.

Kaiserslautern: The Raiders need only a win against last-place Lakenheath on Saturday to secure their playoff spot.

Vilseck: A two-game winning streak has the Falcons back at .500 and looking playoff-ready; a win over Patch on Saturday will make it official.

Lakenheath: The Lancers need a 2-0 finish and some cooperation from Vilseck and Patch to extend their season.

The more-crowded smaller-school division will play an extra week of the postseason. The top four teams from the north region and the top four from the south will pair off against each other Oct. 19, leading to Oct. 26 semifinals. The two winners will meet for the division title.

Bitburg: In true champion’s form, the Barons have already completed their undefeated regular season and await their quarterfinal visitor.

SHAPE: The Spartans’ clinched playoff berth isn’t the only reason for optimism in Belgium: their 16-0 loss to Bitburg on Saturday was by far the best showing of any challenger against the Barons.

International School of Brussels: It all comes down to Saturday for the Raiders, who can join the playoff party by beating Alconbury.

Alconbury: Same goes for the Dragons, who stayed on the playoff periphery with victories over winless AFNORTH and Rota and can reach the postseason by beating ISB.

Ansbach: The Cougars are 4-0 entering the final week of the regular season and are assured a home quarterfinal matchup.

Vicenza: Italy’s best hope at a European title can land a blow for the cause Friday as Ansbach pays a visit. A win locks in a home-field advantage next week.

Hohenfels: The Tigers have wrapped up a 3-2 regular season and are awaiting an opponent for which to prepare.

Naples: The Wildcats aren’t at the level of the 2012 edition that threw a huge scare into Bitburg in last year’s title game, but they’ve earned the chance at another playoff run.

The four-team league playing nine-man ball will crown a champion at the end of its six-game season. But the group has had one clear standout squad.

Brussels is a perfect 3-0 midway through its six-game season, and will face foes Woodham, Menwith Hill and Lakenheath’s junior varsity squad one more time each. All remain mathematically alive for the league’s inaugural title.