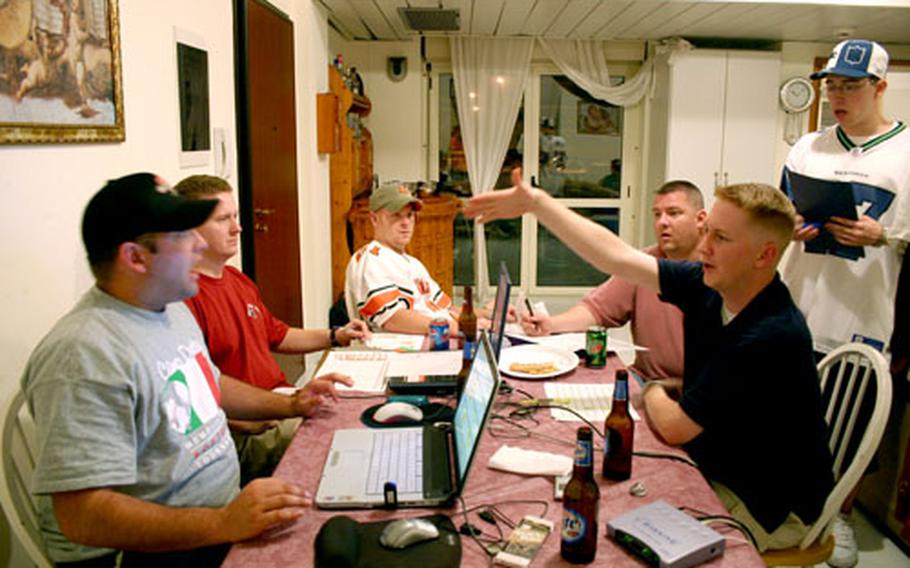 Sailors assigned to a computer and telecommunications unit in Naples, Italy, huddled earlier this month to address pressing issues.

They talked of intercepts, bombs, ground attacks and front-line security. And they did so with grins and glasses of beer, or whatever Andres Armeda had on tap for his pigskin pow-wow. By the time they left his home, each claimed a new cast of cleated characters to call their own.

August is when guys like Armeda and Troy Todd, a colleague, link up with other diehards to &#8220;draft&#8221; NFL players onto their fantasy football teams. Some draft with friends &#8212; near and far. Others go to one of the many Web sites that offer fans the chance to play online, often for free.

That&#8217;s more or less the essence of fantasy football: armchair quarterbacks divvy up NFL players and create a virtual league of their own.

Basically, each weekend the teams in your league square off against an opponent. The following weekend another set of games is played and the opponents change. Records are kept, with the top teams eventually advancing to the &#8220;playoffs,&#8221; typically held in the final weeks of the NFL regular season.

A fantasy team&#8217;s success depends on how well its players perform statistically in the NFL games, with points tied to production.

But it all goes back to that weekend in August, when countless numbers of football fans pore through magazines, articles and notes to themselves in hopes of drafting competitive teams. Skill, knowledge and luck weigh heavily into the equation.

Do you follow conventional wisdom and draft a running back first? Is Indianapolis Colts quarterback Peyton Manning worth taking early in the first round? Will Philadelphia Eagles receiver Terrell Owens&#8217; contract dispute affect his play? How about Miami Dolphins running back Ricky Williams? Which rookies are worth drafting?

Lutes is in a league that dates back to his days at Hickam Air Force Base, Hawaii. Most of the players are at other locations, from Iceland to Iraq, but the integrity of the league remains.

The same could be said for Maj. Matt Nicoletta of the 48th Fighter Wing at RAF Lakenheath, England.

He&#8217;s in a fantasy football league known as &#8220;The Fellas,&#8221; a pipeline of sorts to high school and college buddies. The draft, held every year in Colorado, has undergone changes since the league debuted nine years ago.

Like other servicemembers, Nicoletta said the thrill of fantasy football is that more NFL games become interesting, especially when you or your opponent&#8217;s players are playing.

Vergona finished near the bottom in his league last year. He attributed his lackluster showing to picking too many players from the Buffalo Bills, his favorite team. Vergona said he wouldn&#8217;t make the same mistake in 2005.

Army Sgt. Maurice Stevens, also of Wiesbaden, figures to do better this year, too.

Some servicemembers know the intricacies quite well.

Take Air Force Staff Sgt. Richard L. Gallagher Jr., who will be playing in nine leagues this year. Gallagher, who works near Ramstein Air Base, Germany, runs a couple of leagues, plays with buddies in some, plays online with strangers in others, and is generally up to his ribbons in rosters.

He likes Manning as the No. 1 pick, depending on the scoring system, and considers Ricky Williams a good sleeper pick.