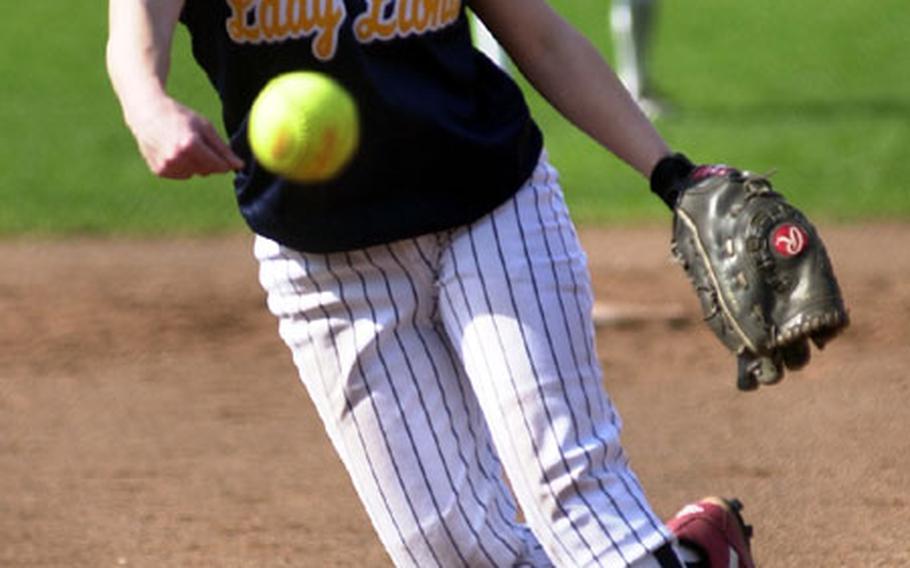 Heidelberg&#39;s Meagan Perry was the winning pitcher in the Division I Lions&#39; 8-3 win over the Division II Patch Panthers in the first game of a doubleheader. It was the season opener for both teams. (Michael Abrams / S&S)

HEIDELBERG, Germany &#8212; All-Europe returnee Megan Perry went the distance in both games Saturday as the Heidelberg Lady Lions swept Patch 8-3 and 13-9 in a nonconference high school softball doubleheader that opened the season for both teams.

Perry gave up an uncharacteristic seven hits in each game, but prevailed in part because Heidelberg drew 10 walks in each game.

Alissa Dawson went 2-for-2 in the opener for Heidelberg, which got a two-run homer from Dana Kaita and two hits each by Sally Rush, Kawena Kamanao and Cassandra Pope in the second game.

Michelle Hughes, who pitched the second game, was 2-for-2 for Patch in the opener.

In other games Saturday:

Victoria Apodaca drove in four runs for the Lady Royals, and Meagan Hillard drove in three with three doubles in the opener.

Apodaca struck out five and picked up the victory in the second game. Heather Steele had two hits and three RBIs.

Kaitlin O&#8217;Neil and Samantha Snow took the losses for Wiesbaden.

WIESBADEN, Germany &#8212; Relief pitcher Amanda Keitzman picked up a save by getting a ground out, a strikeout and a pop-up in the final inning.