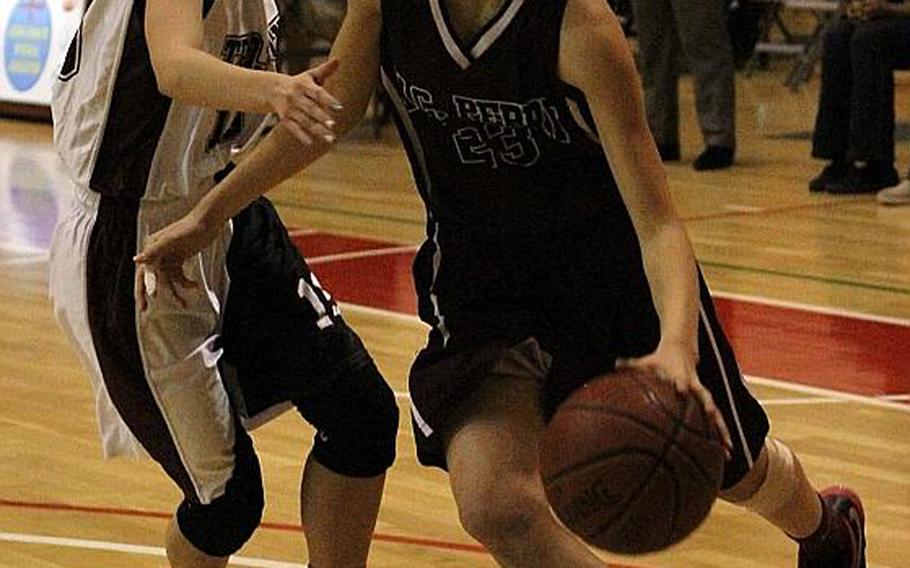 Matthew C. Perry basketball makes a journey into rarely charted territory this weekend, and at least one of the coaches is looking forward to it.

Only once before has Samurai basketball visited a Kanto Plain Association of Secondary Schools international-school campus, much less two. That changes Friday when the Samurai visit Christian Academy Japan, then on Saturday the boys head to St. Mary’s and girls to Seisen International.

Perry is a Division II school, while and CAJ, Seisen and St. Mary’s are Division I, but coach Dewayne Pigge’ feels his Samurai boys team is up to the test.

“I believe we’re competitive enough to compete with international schools in Tokyo,” Pigge’ said. Perry, behind guards Jon Cadavos and Vincent Ermitano and post player Jarell Davis, is 8-5 overall this season and 4-5 in DODDS Japan. St. Mary’s is 6-8 and CAJ 3-1.

Both schools are about 45 minutes to an hour away from Yokota, where the Samurai teams will bunk overnight Friday.

“It is something new for Perry, having not played (in the) Kanto Plain. I think it’s a challenge for us in preparation” for the Far East Division II tournament next month, which the Samurai will host.

Perry’s girls, fueled by center Ani Erhart and guards Briana Drake and Naomi Ziola, are seeking their first win of the season after dropping their first 11. Seisen is 8-2 and CAJ 1-5. It’s the last long-haul trip for Perry’s teams this season.

Okinawa’s teams continue their industrious schedule of recent weeks, most notably Kubasaki, whose boys and girls welcome Maehara and Haebaru on Friday and Oroku and Kita Nakagusuku on Saturday. Gushikawa’s girls visit Kadena on Friday.

The only games scheduled in Korea – where the Lunar New Year is being observed along with typically heavy holiday traffic – pits Daegu at Humphreys on Saturday. A scheduled DODDS Korea four-way wrestling meet at Seoul American was canceled because of the holiday and traffic.

Guam High’s boys, who have matched the best start in school history at 5-0, seek to keep that ledger perfect Friday at home against John F. Kennedy (5-1) and Saturday at St. Paul Christian (3-2).

The only mat action this weekend is the Kanto Plain Invitational, the final meet of the regular season featuring the six Kanto Plain wrestling schools at CAJ. Kinnick is coming off a DODDS Japan meet at Zama where it won 10 titles and won going away.

“We still have some issues to fix, we need to get better at each weight,” Red Devils coach Gary Wilson said. “But We had a good week of practice. We’re as ready as we can be. We just need to work on a few things.”