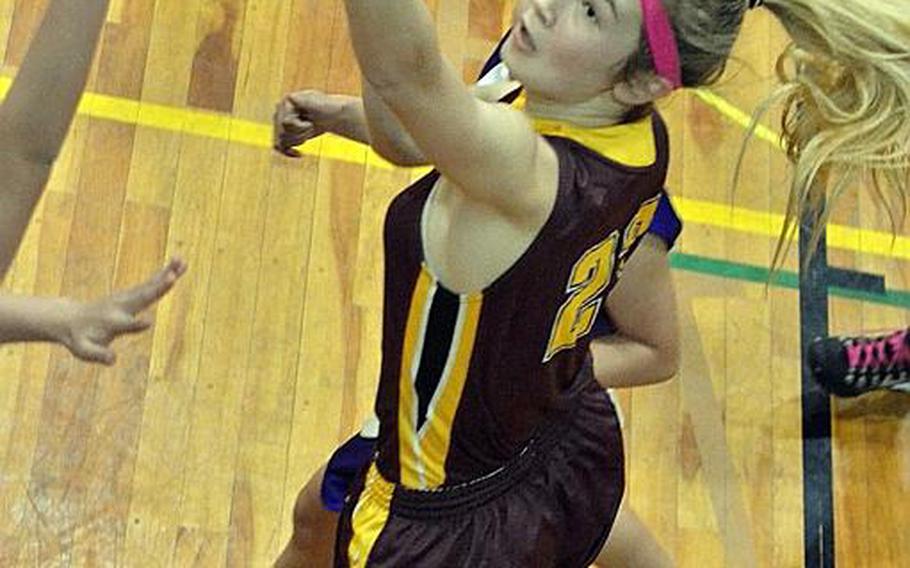 Matthew C. Perry senior guard Naomi Ziola suffered two strokes at age 6 which affected the right side of her body -- her dominant side. Over the years, Ziola rehabilitated and learned to do things left-handed. In basketball, she dribbles and shoots left-handed but can also use the right hand to steady the ball. (Dave Ornauer/Stars and Stripes)

Matthew C. Perry senior guard Naomi Ziola suffered two strokes at age 6 which affected the right side of her body -- her dominant side. Over the years, Ziola rehabilitated and learned to do things left-handed. In basketball, she dribbles and shoots left-handed but can also use the right hand to steady the ball. (Dave Ornauer/Stars and Stripes) 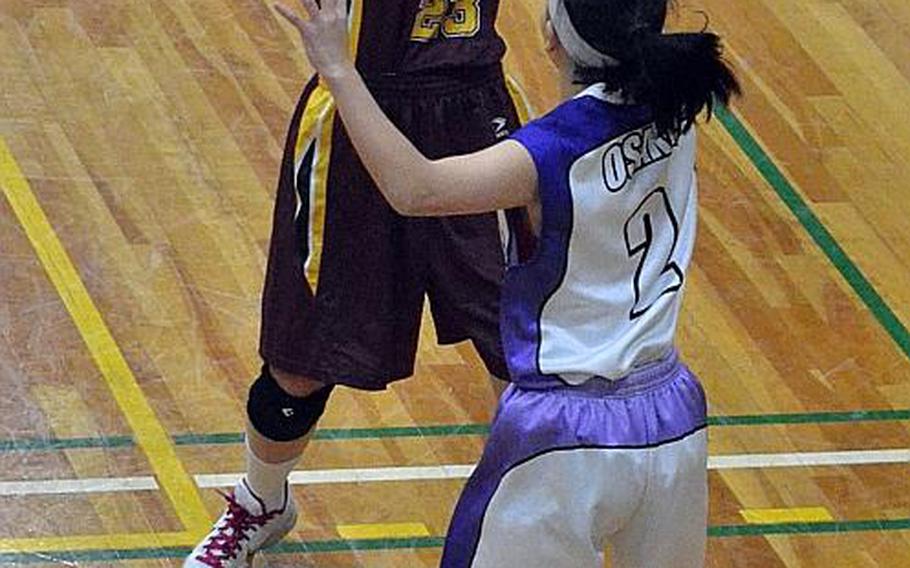 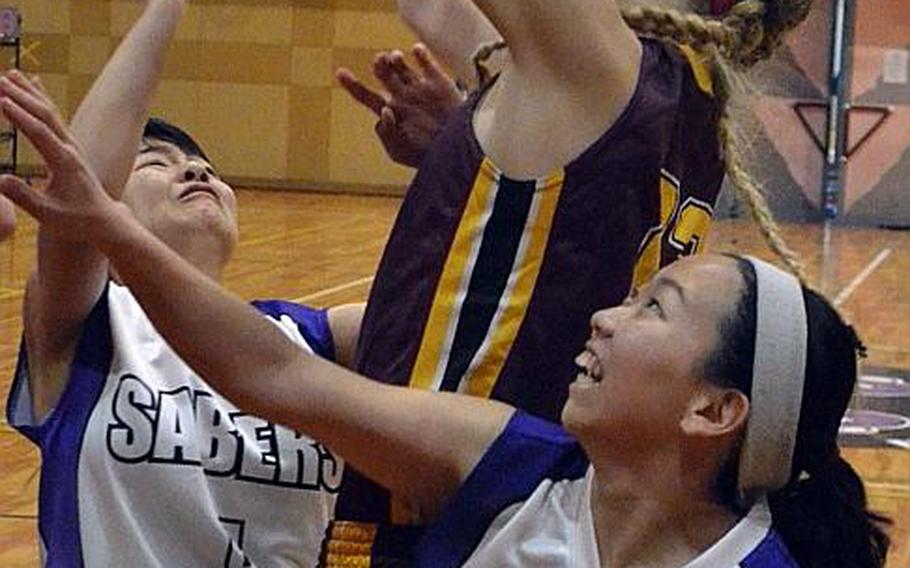 OSAKA, Japan – Devon Shuman raced up court with the ball, with Naomi Ziola running alongside as a wingman on the left. Shuman, the point guard, pushed the ball down low to small forward Lebet Erhart, only she found herself double-teamed near the basket.

Erhart kicked the ball behind the arc to Ziola, atop the foul circle just on the left side. She launched it with the left hand. Falling noiselessly through the net, the shot gave the Samurai three points.

Such plays are commonplace for Matthew C. Perry’s senior shooting guard, who once hit 10 three-point goals in a game as a junior.

And they’re a long way from the day in 2004 on a San Diego playground, where pain washed over the left side of her face. As if she’d been hit by some rocks thrown by the friends she was playing with on a playground.

Only the pain didn’t cease. The 6-year-old Ziola’s right side of her body didn’t seem to be working. And she couldn’t speak. “I started crying because it hurt really, really badly,” she recalled.

Unable to communicate with words, her right side sagging, Ziola tried climbing up the bleachers where her father, Martin, sat watching his son practice baseball nearby. “I told you not to climb on the bleachers because you are going to fall,” Naomi recalled her father saying.

Soon enough, the then-Marine officer realized his daughter was having a stroke. The first of two she would have on successive days. Those two episodes would rob Ziola, a natural right-hander, of her ability to write, to walk, to eat, to even speak.

“My whole right side got heavy; it felt like I couldn’t lift up anything on my right side,” Ziola said Saturday during a break in the Sabres Invitational Girls Basketball Festival at Senri Osaka. “The ability to use my right hand and walk had been taken from me.”

Within a few months, she regained the ability to walk, but hard work and rehabilitation stretched on for years. She got help from her mother, Michiko, a nurse, and a physician assistant relative who got the family contact with doctors.

She doesn’t have full use of her right hand and has learned to do most everything left-handed.

“She handled it like a champion,” Martin Ziola said, adding that rebounding from the episode was “indicative of everything she does.”

Strokes are generally associated with older people, but they can occur in people of any age. The Mayo Clinic defines a stroke as when the blood supply to part of the brain is interrupted or severely reduced, depriving the brain of oxygen and nutrients.

Her doctors determined that a blood clot had caused the strokes. At such a young age, Ziola said she was more frustrated than anything, because “I didn’t know what was going on. I was too young to understand what was happening to my body and … my brain initially.”

The family continued to move: San Diego to Marine Corps Air Station Iwakuni in Japan for a year, to Jacksonville, N.C., then back to Iwakuni, where they’ve been since Naomi’s sixth-grade year.

Much would-have-been class time was spent in therapy. “I used to get bullied for it in school in California; they would try to do things to me, and I couldn’t do certain things,” she recalled. “I missed class a lot and playing with kids at a young age.”

But rather than cry about things – “Crying doesn’t do me any good,” she said – Ziola did things to ramp up her motor skills. Things like picking up pennies and putting them in a paper cup, rolling a ball and catching it, rolling two balls in her hand, stretching and writing.

Along the way, she also developed a stronger attitude. “I was raised to be aggressive because I always had a front on me,” Ziola said. “OK, they’re going to make fun of me, so let me have my guard up. Stuff like that It made me stronger.”

Once it was understood that she had to become left-handed and worked at the transition, “her writing took off and she left it all behind,” Martin Ziola said. “She just moved forward and never looked back.”

Basketball entered Ziola’s life while she was in the eighth grade, alongside peers such as DeQuandre Bernard, who would go on to stardom with Perry boys basketball; and Courtney Beall, who would become one of Ziola’s teammates and role models, she said.

“These people were always there to wake me up at 4 in the morning to go to the gym,” Ziola said. Beall and Bernard “helped me most at that time. DQ knew I had a problem, so he would make me go to the gym. He would have me working on my right hand. Courtney would, too.”

It was quite a load to bear, she said, particularly in her freshman year, when she would “get down easily” when people talked about it. “Courtney always talked to me. She always had my back on the court,” Ziola recalled. “That’s where she comes in as an inspirational person.”

Ziola has become a “strong-willed individual who feeds off success and progress,” said Beall, who departed Iwakuni when Ziola was a junior and now lives in North Carolina.

Ziola also credits Samurai boys coaches Ronnie Pride and DeWayne Pigge’ and girls coaches LaShaunda Norman and Kim Espinoza for her progress. Espinoza says Ziola is one not shy to share her experience, calling her a “coach on the court.”

“She’s one of the strongest people I know,” Espinoza said. “She knows how to make her teammates better. She’s confident. She believes in herself. She’s special. She works at it. She grinds every day to make what people might perceive as a weakness, her strength.”

“She never acknowledged it (stroke) as a showstopper for her, never considered that a stroke would hold her back” from playing basketball, Martin Ziola said.

Perry won all four games at Osaka, the team’s best start in Ziola’s four seasons. With sisters Ani and Lebet Erhart manning the paint and Shuman at point, Perry is taking aim at WJAA and DODDS Japan titles next month and Far East D-II on their home court in February, Ziola said.

“I want the banner,” Ziola said. “I’m not saying we’re going to win, but we have good players. We’re all hungry for it. We all want to win.”