Perry's basketball programs: Yes, we can Buy Photo
Matthew C. Perry Samurai boys basketball freshman guard Jon Cadavos is averaging 25.6 points, 11 rebounds and 13 assists so far this season. The Samurai boys (6-1) and girls (5-2) have gotten off to the best combined start in school history since the formation of the DODDS Japan league in 1999-2000. (Gaku Lange/Special to Stars and Stripes)

Buy Photo
Matthew C. Perry Samurai boys basketball freshman guard Jon Cadavos is averaging 25.6 points, 11 rebounds and 13 assists so far this season. The Samurai boys (6-1) and girls (5-2) have gotten off to the best combined start in school history since the formation of the DODDS Japan league in 1999-2000. (Gaku Lange/Special to Stars and Stripes) 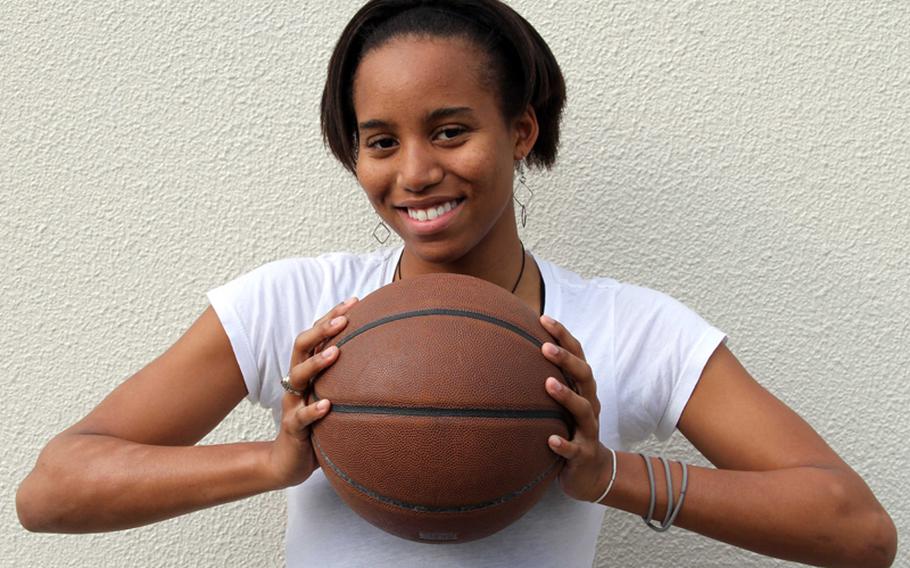 The scoreboard read 36-11, with E.J. King owning the larger number. It was part of an 0-2 start to the season for host Matthew C. Perry.

Coach April Kelley&rsquo;s Samurai only had three practices; most of the regulars were missing due to injuries or schoolwork catch-up after the Far East fall sports tournaments.Kelley approached Cobras coach Mimi Long, shook her hand and said: &ldquo;You&rsquo;ll see a different Perry team the next time you play us.&rdquo;Since then, it&rsquo;s been a rocket ride for Perry basketball, boys and girls, who at 11-3 are off to their best combined start since the DODDS-Japan league opened for business in 1999-2000. One team or the other may have gotten a good start in one year or another, but never both.Perry&rsquo;s girls have won their last five games by a 20-point average. Senior Rebekah Harwell has averaged 30.7 points in that span. Perry&rsquo;s boys&rsquo; only loss in seven games was 45-40 at Nagoya International; freshman Jon Cadavos is averaging a triple-double so far this season.&ldquo;This is the thing we&rsquo;ve needed,&rdquo; sophomore center Courtney Beall said.Quite a turnaround for a girls program that&rsquo;s gone 21-68 the last four seasons, including 4-22 last year. The boys have gone 60-64, including a 37-34 ledger the past two years, but this was a program that was suspended after four games in 2007-08 due to undisclosed conduct violations.&ldquo;One of the biggest changes is they have to ensure the words &lsquo;I can&rsquo;t&rsquo; don&rsquo;t come out of their mouths,&rdquo; said Kelley, the Samurai&rsquo;s first-year coach. &ldquo;I can vs. I can&rsquo;t. Once they set their minds to do something, they can do it as long as we stay positive that we can do it.&rdquo;&ldquo;No one really expected us to win this year because of how young our team is,&rdquo; said Cadavos of a Perry boys team that has just two returnees and seven freshmen.Harwell, on the other hand, says she expected this.&ldquo;We decided we wanted to make a name for ourselves and put in effort both on and off the court,&rdquo; she said.Her Samurai are also young, including Beall (11 points, 13.5 rebounds per game) and freshman guard Briana Drake (10 points per game).Players and coaches say the Perry program is trying to dispel the notion that their teams are one-player shows.Last season, John Ayers was the go-to player on a 19-17 boys team; Harwell did the lion&rsquo;s share of the scoring for the girls, and so far this season has already matched the two-year-old Pacific single-game scoring record of 44 points, Nov. 26 at Nagoya International.This season, &ldquo;We collaborate a lot more,&rdquo; Beall said. &ldquo;Everybody&rsquo;s getting involved.&rdquo;The question for the Samurai is how long can this last? They face their toughest test so far this weekend at a Western Japan Athletic Association tournament in Osaka and Kobe, and have yet to face Robert D. Edgren or Japan&rsquo;s Division I teams, Yokota and Nile C. Kinnick.ornauerd@pstripes.osd.mil