Perry, Humphreys to get a feel for each other before title game 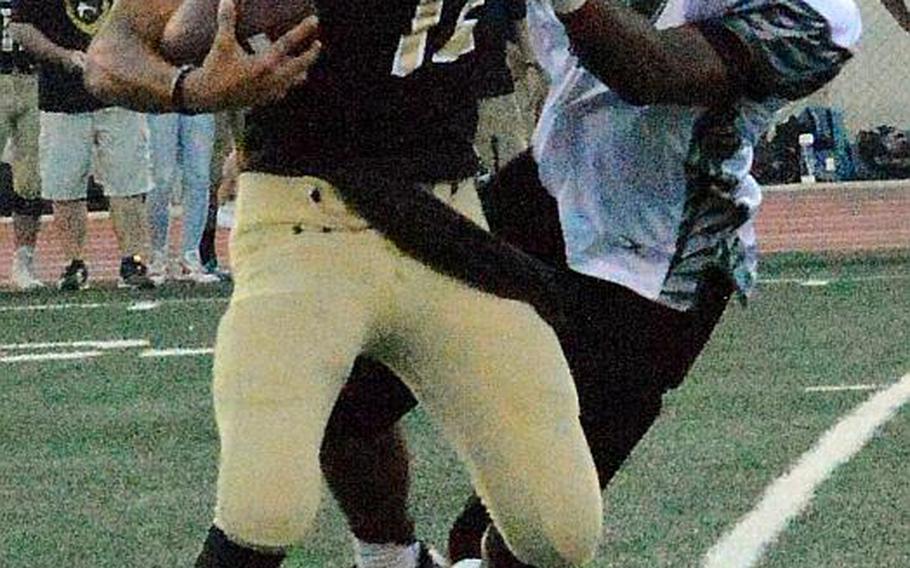 It’s rare that two teams get a chance to see each other two weeks before they likely play each other for Far East Division II football’s top prize.

Yet that’s what Matthew C. Perry and Humphreys get to do Friday in a rematch of last year’s D-II final. The Samurai travel to Korea for third time in three years and visit Humphreys for the first time. Perry routed the Blackhawks 44-6 at home last Nov. 5 in the D-II final.

The two teams could very well meet again the weekend of Oct. 27-28 in the D-II final, scheduled at the site of the Korea D-II winner.

Humphreys beat Daegu 40-8 on Sept. 22 and the two teams meet again at Daegu on Oct. 20; if the Blackhawks win or lose by 19 points or fewer, their host berth is assured.

Friday’s game counts for nothing in terms of standings or home-field advantage. But as Perry coach Frank Macias says, it’s a “cat-and-mouse thing, a chance to measure, feel each other out and figure out things we need to work on.”

“Winning this game is a big part of this season, but as always, we’re taking things one game at a time, keeping our eyes on the prize, aiming for the championship,” Blackhawks coach Steven Elliott said.

Each team enters this week’s game at a disadvantage. Perry had five players sit out practices this week, nursing injuries in the run-up to Thursday’s flight to Korea. Humphreys returned Tuesday from an extended road trip to Robert D. Edgren and had limited practice.

“It’s a little different from our normal routine, but we’re treating this like the big game that it is, homecoming, the next game on our schedule; we’re giving it all the attention it deserves,” Elliott said.

Yes, the Blackhawks (4-0) remember their comeuppance at Perry a season ago, but only in a back-burner manner, Elliott said. “It does give them some extra motivation as to who we’re playing.”

As for the Samurai (4-1), this is their third straight homecoming game as the visiting team. They traveled to Yokota two weeks ago and were guests at Zama’s homecoming last week.

“I hear they’re stacked,” Macias said of Humphreys. “It’s a great opportunity to see them before it matters. We’re excited to make the trial run.”

After having escaped Yokota with a 30-28 win on Sept. 29, “I’m not underestimating anybody,” Macias said.

In other football games of interest, last year’s Division I champion American School in Japan travels to Kadena; kickoff is 6 p.m. Friday. The Panthers are hoping to sweep the season series after losing twice to the Mustangs a season ago. They routed ASIJ 67-26 on Sept. 23.

Guam High begins its run through the Interscholastic Football League playoffs on Saturday against George Washington at the University of Guam; kickoff is at 3 p.m.

Rain is in the forecast for the Kanto Plain Association of Secondary Schools cross-country finals, slated for Saturday on the 2.9-mile boys and 2.1-mile girls courses at the Tama Hills Recreation Center. Races begin at 9 a.m.