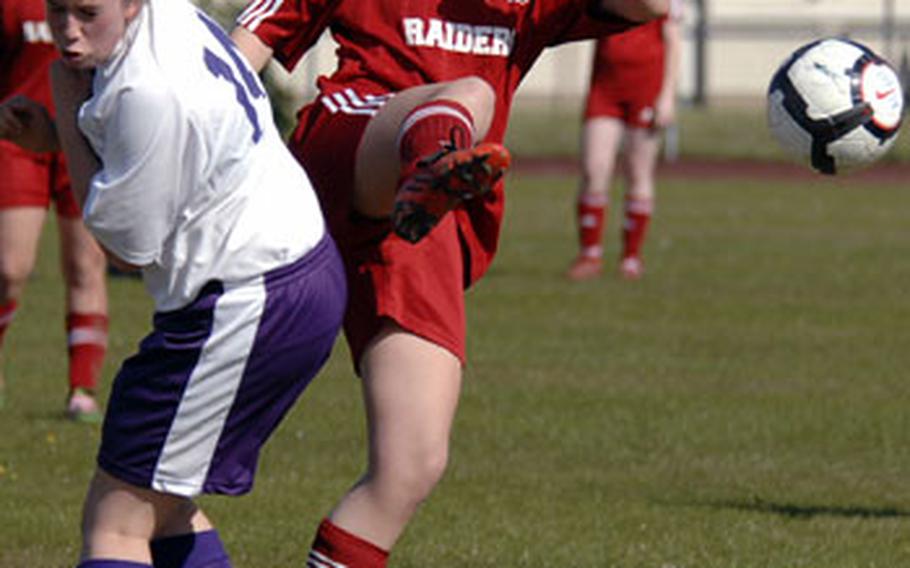 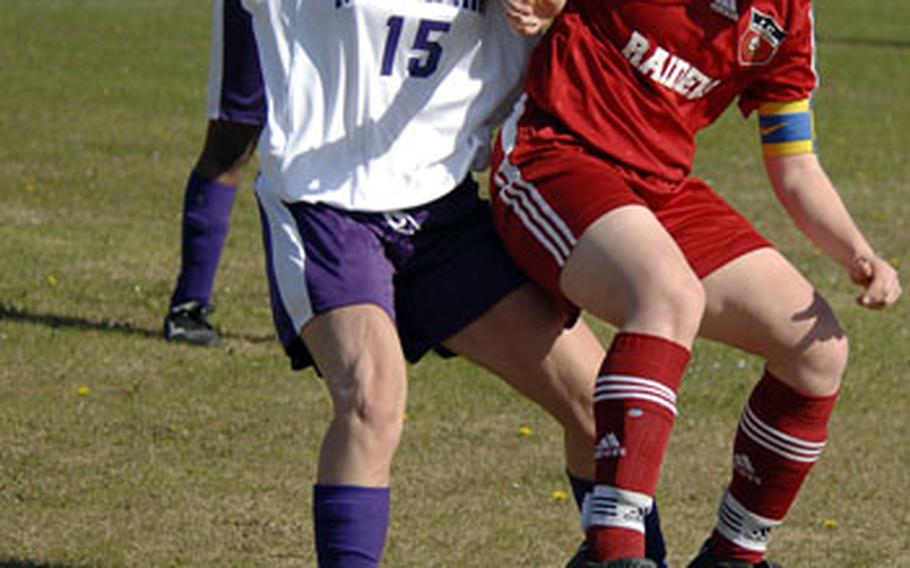 Mannheim&#39;s Krystal Hartke, left, and Kaiserslautern&#39;s Rachel Hook fight for the ball in a game at Mannheim on Saturday. Kaiserslautern won 2-1. (Michael Abrams/S&S) 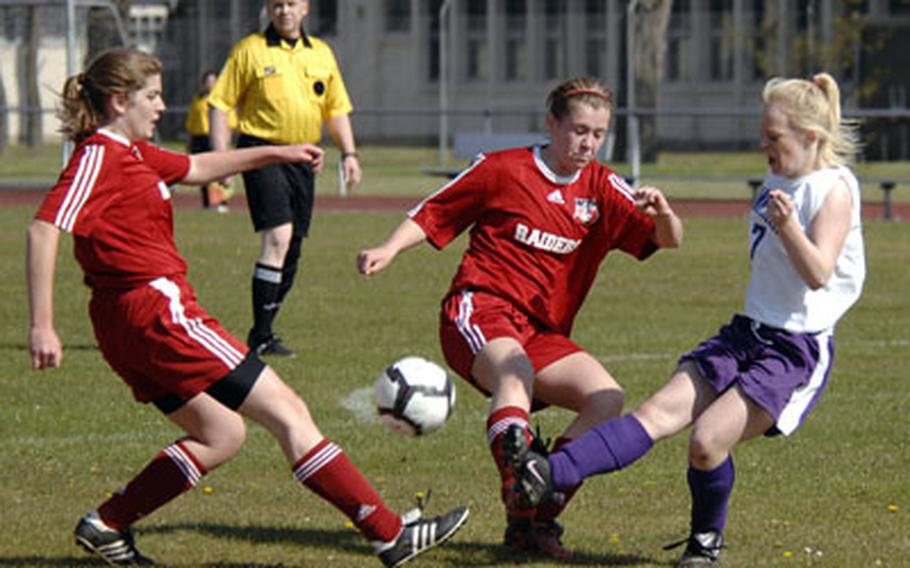 Goals in the first two minutes of each half and a second-half penalty kick lifted visiting Patch to a 3-2 girls soccer victory over Heidelberg on Saturday and kept the Lady Panthers undefeated.

Rachel Masset, off a pass from Carolina Rivera, scored the game-opening goal. All-Europe striker Nellie Loney took a pass from Emma Murray and duplicated Masset&#8217;s feat to start the second half. Elysia Verones then beat Lady Lions keeper Melanie Stordahl on the penalty-kick winner for Patch (4-0 overall and 3-0 in Region III).

Heidelberg&#8217;s Melissa Fry answered Masset&#8217;s goal to make it 1-1 at halftime, and Katelyn Garner scored on a penalty kick after intermission for Heidelberg (2-2 overall and 2-1 in the region).

Ramstein coach Ricardo Buitrago praised his defenders &#8212; Bryonna Bowen, Amber Callan, Mackenzie Crews and Sydnie Reynolds &#8212; for keeping Bitburg at bay throughout. He also lauded centers Alana Sciuto and Keily Herron and wings Seebeck and Laura Welch for their control of the game, and his team&#8217;s fluid and solid passing, which he said generated numerous scoring chances.

SHAPE 4, Lakenheath 2: Saturday at Mons, Belgium, Kathryn Bell and Jennifer Dargie each had a goal and an assist, and Megan Fleet turned aside 11 Lakenheath shots, including two penalty kicks, as the Lady Spartans won their Region I opener.

Despite being short nine players who were unable to return in time from spring break because of travel delays caused by the eruption of the volcano in Iceland, Lakenheath (1-2-0 overall, 1-1-0 in Region I) had defeated AFNORTH 5-2 on Friday. Amber Buckingham fueled that victory with two goals.

Saturday was a different story as Fleet got hot in the nets. "SHAPE&#8217;s center midfielders, Melyssa Gomez and Andrea Dargie, also deserve mention for winning the ball and calmly distributing it," SHAPE coach Shawn Whitehurst said.

SHAPE (1-1 overall and 1-0 in the region) got its other goals from Gomez and Elizabeth Burden.

Naples 7, Florence 3: Saturday at Naples, Italy, Demi Holbrook pulled off the hat trick as the Lady Wildcats evened their overall and regional records at 2-2-0.

Naples, which also got two goals from Haylea Witz and single scores from Sofia Cianciaruse and Abby Walker, led 7-0 at the half.

Both goals came after a scoreless first half. Katie Jackson made them stand up with 12 saves. Mannheim&#8217;s goal was scored by 2008 All-European Alana Crockwell.