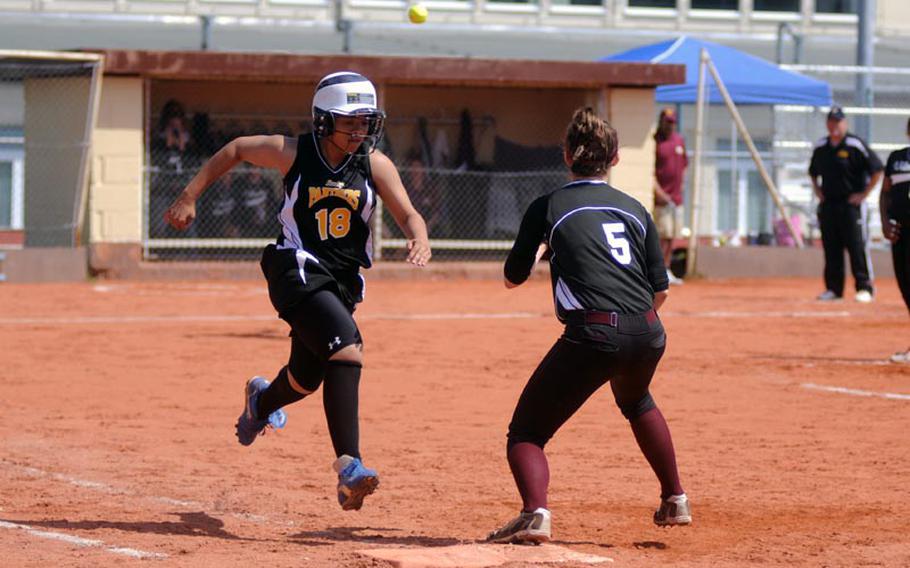 Patch's Caitlyn Steffen arrives at first base as Vilseck first baseman Taylor Hall is about to catch the ball during a game Saturday at Patch. (David Rogers/Stars and Stripes)

Patch's Caitlyn Steffen arrives at first base as Vilseck first baseman Taylor Hall is about to catch the ball during a game Saturday at Patch. (David Rogers/Stars and Stripes) 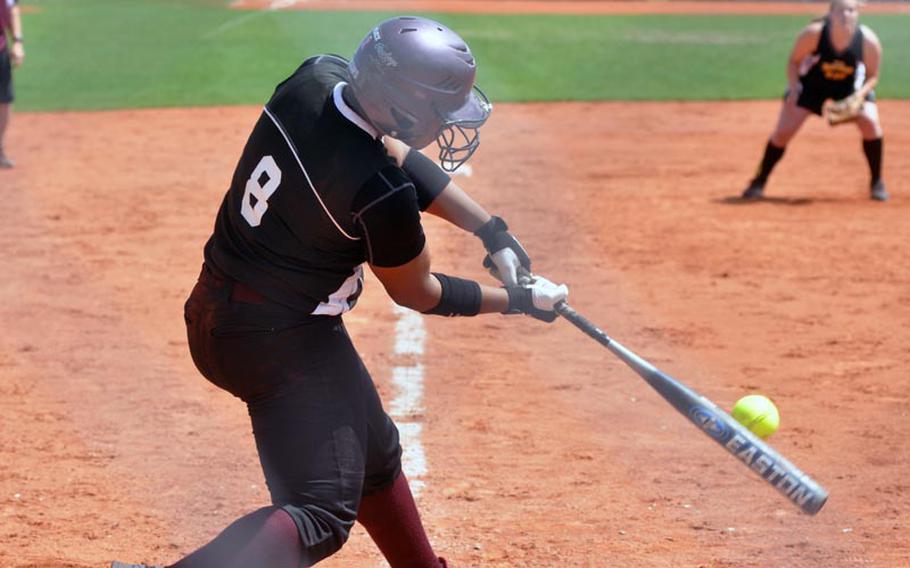 Vilseck's Deraj' McClinton hits the ball during a game Saturday at Patch. (David Rogers/Stars and Stripes) 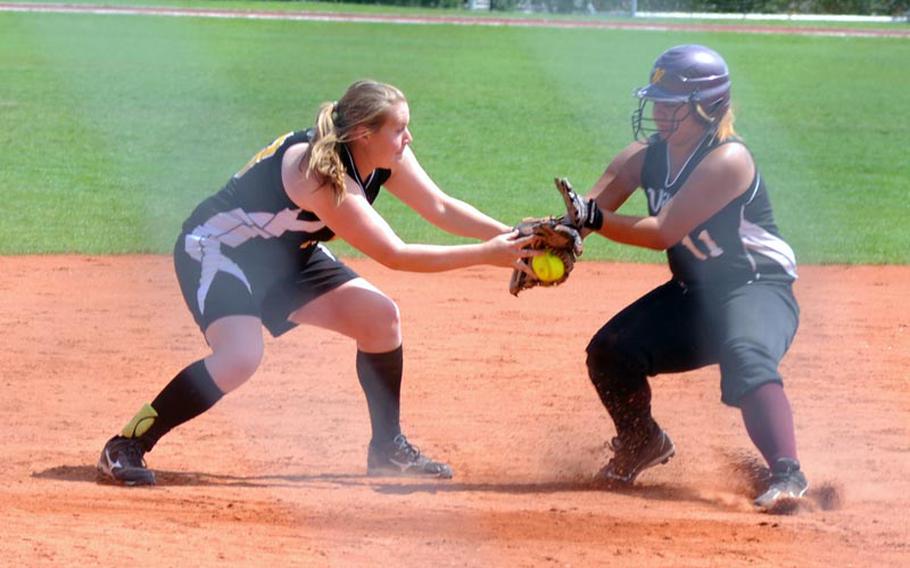 Patch's Jessica Rahn tags out Vilseck's Stephanie Leitold after a rundown during the doubleheader Saturday in Stuttgart, Germany. (David Rogers/Stars and Stripes)

STUTTGART, Germany - Two of the last four unbeaten teams in DODDS-Europe softball knocked each other from the ranks of the perfect Saturday.

Patch downed Vilseck in the first game, 12-4. But the Falcons won the second off the defending Division I champions, 13-12. The two teams finished tied atop the Eastern Region standings at 13-1. Only Kaiserslautern, which won the Western Region and Division II power Naples, the Southern Region champion, finished the regular season with perfect records.

The first game was a pitchers&rsquo; duel, despite the final score. Patch&rsquo;s Amber Marvin gave up six hits and had nine strikeouts. Vilseck&rsquo;s Deraj McClinton had eight strikeouts and gave up seven hits. Five of the seven were in the sixth inning.

Vilseck was up 3-1 in the bottom of the sixth. But a series of errors coupled with a surge of hits by Patch put the Panthers on top to stay. With the bases loaded, the Falcons committed two errors on a single play, allowing three runs to score.

In the second game, Vilseck took a big lead and had co-ace Taylor Hall on the mound, with sophomore ace Marvin resting for Patch.

Vilseck scored 12 runs in the first three innings off Patch&rsquo;s Katelyn Tingey. But the Panthers slowly caught up and the game was tied 12-12 by the bottom of the sixth.

With barely enough time on the game clock for another inning, Patch brought Marvin back out to pitch.

&ldquo;We didn&rsquo;t have much time left so we were trying to get out of that inning quickly so we could get another at bat,&rdquo; Patch coach Brian Tingey. &ldquo;But we just ran out of time and they were able to get another run in as we made some errors.&rdquo;

It was Marvin&rsquo;s first loss of her career.

Hall says Europeans will be tough with Ramstein, Kaiserslautern, Vilseck and Patch as the teams to beat.