Patch tough to beat with Marvin on mound 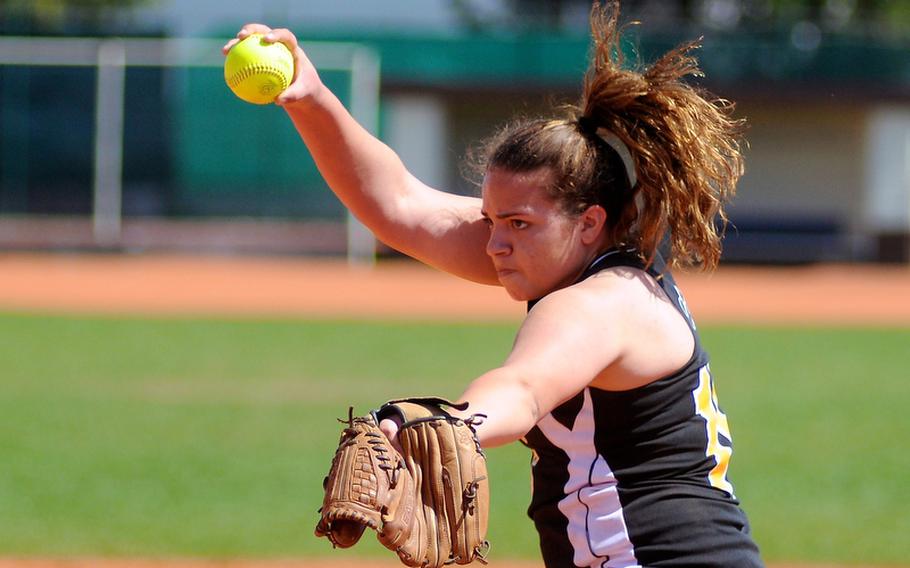 Patch sophomore pitcher Amber Marvin is 7-0 and has struck out 61 batters this year, helping the defending champion Panthers to a 12-0 record heading into a weekend showdown with Vilseck. (David Rogers/Stars and Stripes)

For someone who&rsquo;s been playing softball for a mere four years, Patch sophomore Amber Marvin has made some big strides.

The 15-year-old right-hander has yet to lose a varsity softball game. She went 8-0 last season as a freshman for the Division I champion Panthers, striking out 56 batters and numbering two no-hitters and three one-hitters among her victories.

To Marvin, however, the bigger satisfaction of that campaign was finally getting a chance to play varsity softball after three years in Youth Services ball.

&ldquo;Yes, I was,&rdquo; she said by telephone on Tuesday when asked whether she was relieved finally to get to the European youth softball equivalent of the Big Leagues. &ldquo;I wasn&rsquo;t challenged enough in YS (Youth Services).&rdquo;

So far, she hasn&rsquo;t appeared to be challenged enough at the varsity level, either. This season, taking over as the ace of the Panthers&rsquo; staff, Marvin&rsquo;s 7-0 and again has tossed two no-hitters. The 2012 no-hitters, though, improved on 2011&rsquo;s no-nos. They were perfect games that have helped lift the Panthers to a 12-0 record going into Saturday&rsquo;s 10 a.m. East Region title showdown against an equally unbeaten visiting Vilseck squad.

Moreover, Marvin, who&rsquo;s been touched for just five hits all season and who&rsquo;s already struck out 61 batters, has pitched three perfect innings in relief, too, and earned a save, according to her coach, Brian Tingey.

Which poses a question: What&rsquo;s the ace of the staff doing working relief?

&ldquo;I&rsquo;ve tried to limit her to one game a weekend,&rdquo; Tingey said of Marvin, a .556-batting first-baseman. &ldquo;I only use her in both games when we&rsquo;re in trouble.&rdquo;

Don&rsquo;t let that spotless record fool you, though. Marvin, who said she throws a fastball, change-up and knuckleball, has noticed the pressure that comes with being the team&rsquo;s No. 1 pitcher.

&ldquo;It&rsquo;s a little tougher,&rdquo; she said of the role she&rsquo;s earned mainly through assiduous off-season work. &ldquo;I have to pitch more this year.&rdquo;

Marvin, who&rsquo;s bound for San Diego this summer to participate in a traveling league in the Southern California crucible of the sport, said she especially enjoys throwing her knuckler.

The knuckler and the works-in-progress curve and drop balls Marvin said she&rsquo;s developing are products of an impressive work ethic.

&ldquo;I&rsquo;ve been helping other girls learn to pitch,&rdquo; said Marvin, who herself took up pitching in middle school after emerging from team tryouts for the position. &ldquo;This year, one of the girls I taught (freshman Mikaela Cunningham) made the team.&rdquo;

Marvin said she passes along the mechanics of the position, along with large helping of her work ethic, to the younger players.

Marvin&rsquo;s reward for her instructional efforts?

This weekend, the best part for Marvin and her teammates will be to see how they stack up against Vilseck. Then it&rsquo;s on to Ramstein-Kaiserslautern next Thursday, Friday and Saturday to defend that D-I title.

&ldquo;Euros are always the &lsquo;funnest&rsquo; part of the year,&rdquo; Marvin said, giving a competitors-eye view of the most pressure-packed event on the prep calendar. &ldquo;We want to play the best we can and have fun, whatever happens.&rdquo;