Patch to meet Ramstein for title Buy Photo
Kaiserslautern's Reagan McCurn connects for a three-run triple in a late rally against Ramstein. Her effort was for naught as the Raiders came up short, losing to Ramstein 10-7. (Michael Abrams/Stars and Stripes)

Buy Photo
Kaiserslautern's Reagan McCurn connects for a three-run triple in a late rally against Ramstein. Her effort was for naught as the Raiders came up short, losing to Ramstein 10-7. (Michael Abrams/Stars and Stripes) Buy Photo
Ramstein catcher Alexis Weathers, left, holds on to foul pop-up despite colliding with teammate Amber Vannaman in the Royals' 10-7 win over Kaiserslautern in a Division I semifinal at the DODDS-Europe softball championships in Ramstein on Friday. (Michael Abrams/Stars and Stripes) 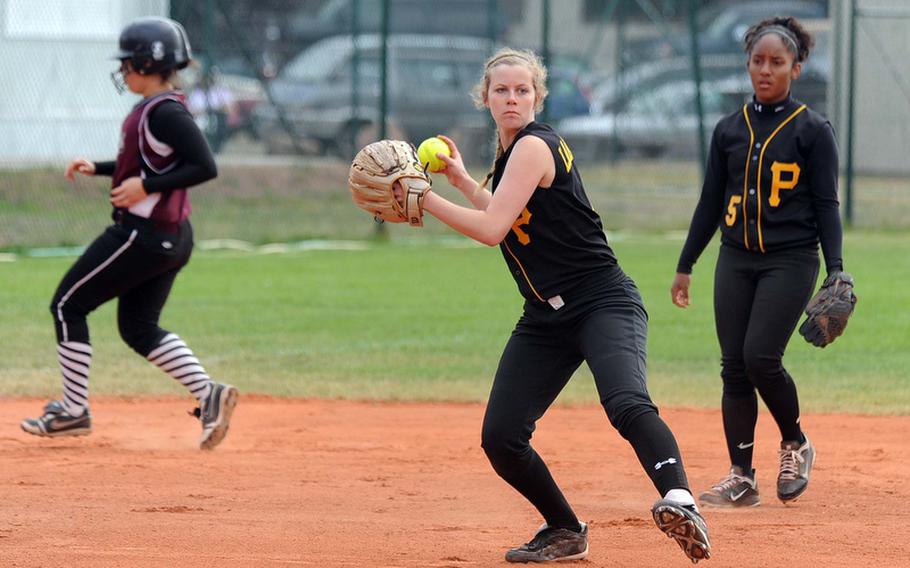 Buy Photo
Patch's Shannon Wright prepares to throw to first after fielding a Vilseck ground ball early in a Division I semifinal at the DODDS-Europe softball finals. Patch won 10-9. At right is Bianca Lopez. (Michael Abrams/Stars and Stripes) 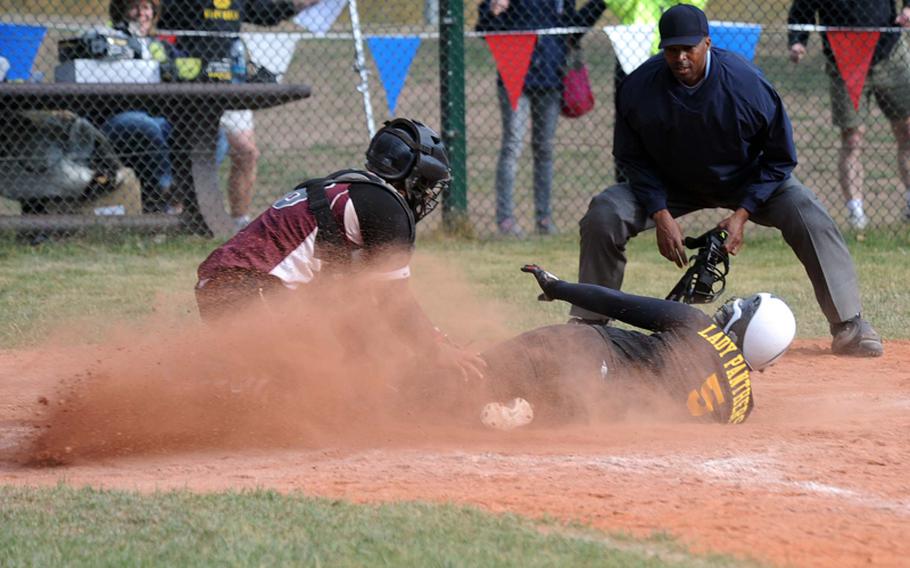 Buy Photo
Patch's Bianca Lopez slides under the tag of Vilseck catcher Derej McClinton to score the winning run in a Division I semifinal game at the DODDS-Europe softball championships in Ramstein. Patch will meet Ramstein in Saturday's title game after the Royals beat Kaiserslautern 10-7. Plate umpire John Robinson gets ready to make the call. (Michael Abrams/Stars and Stripes) Buy Photo
Ramstein's Allison Shelton, right, puts the tag on a sliding Saige Isla of Kaiserslautern in a Division I semifinal at the DODDS-Europe softball championships. Isla was out and the Royals beat K-town 10-7, to meet Patch in Saturday's title game. (Michael Abrams/Stars and Stripes) Buy Photo
Sigonella's Alexis Palmer connects for an RBI hit in the Jaguars' 10-8 win over Rota in a Division III semifinal at the DODDS-Europe softball championships in Ramstein, on Friday. Sigonella will face Incirlik in Saturday's title game. (Michael Abrams/Stars and Stripes) RAMSTEIN AIR BASE, Germany &mdash; After two years of coming up short in the semifinals, Patch rallied Friday with five runs in the bottom of the seventh to beat Vilseck 10-9 and advance to Saturday&rsquo;s DODDS-Europe softball championship game.

Patch will face Ramstein in the Division I finale, hoping to end the champ&rsquo;s three-year hold on the trophy. Ramstein beat cross-town rival Kaiserslautern 10-7 in the other D-1 semifinal game.

The D-II semifinalist will play at 9 a.m. Saturday to determine who advances to the championship game, the last of the three softball finals scheduled. The four vying for the D-II title are: AFNORTH and Bitburg, who will square off against each other, and Naples and Aviano.

Perhaps the most exciting game of the tournament so far was the semifinal game between Patch and Vilseck. The game was tight from the first inning on, with both teams scoring twice. Vilseck scored three runs in the second, only to see Patch post a three-spot of its own an inning later.

&ldquo;We played Vilseck earlier in the year and we split with them,&rdquo; Patch manager Brian Tingey said. &ldquo;We knew it would be a tough game.&rdquo;

Trailing 9-5 entering the bottom of the seventh inning, Patch strung together four straight hits and a walk. By then the game was tied, Patch had its clean-up hitter Bianca Lopez in scoring position and Shannon Wright at the plate. A mishandled grounder allowed Lopez to score and the Patch bench and faithful erupted in a loud and sustained cheer.

&ldquo;We just had to pull together as a team,&rdquo; Wright said afterwards.

Vilseck&rsquo;s Taylor Hall led the Falcons with a 4-for-5 day and two runs scored. Derej McClinton also had a good day, going 3-for-4 and scoring a pair of runs.

Ramstein staked out an early lead in its game against Kaiserslautern, scoring six runs in the second inning and four in the third. Kelsey Freeman pitched a solid game for Ramstein until the seventh, when Kaiserslautern scored five times to close the gap.

Kaiserslautern kept the game close thanks to Karah Helm&rsquo;s three-hit effort. Helm, who scored and drove in a pair of runs each, fell a homer shy of hitting for the cycle.

&ldquo;We are now in the championship,&rdquo; third baseman Breana Plummer said after Incirlik, the fourth, and final, seed, got the final out against second-seeded Alconbury in their D-III semifinal. &ldquo;It was a big game for us.&rdquo;

In Sigonella&rsquo;s game against Rota, both teams scored most of their runs in the second inning. Rota struck first with six runs in the top half of the frame. Haylee Hadaway stroked a bases-clearing triple and later scored herself.

Sigonella did Rota one better, scoring seven times in the bottom of the inning. Sigonella sent a dozen batters to the box and Rota pitcher Natalia Rivera issued four straight walks to open the inning. After a strikeout, Courtney Albert laced a triple. She finished the day with two hits, two runs scored and three RBIs.