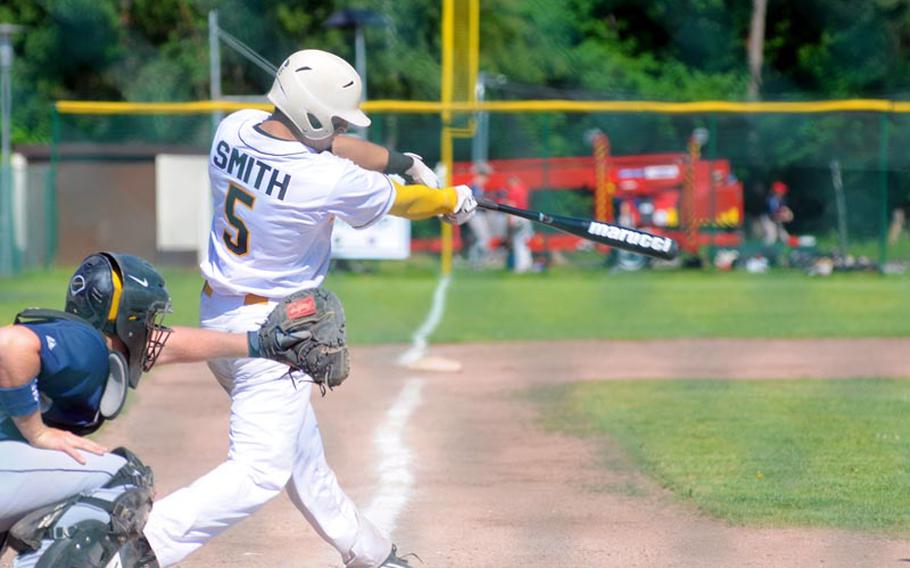 Patch's Jack Smith hits a home run over the right center wall during a Division I semifinal game Friday in the DODDS European baseball championships. (David Rogers/Stars and Stripes)

Patch's Jack Smith hits a home run over the right center wall during a Division I semifinal game Friday in the DODDS European baseball championships. (David Rogers/Stars and Stripes) 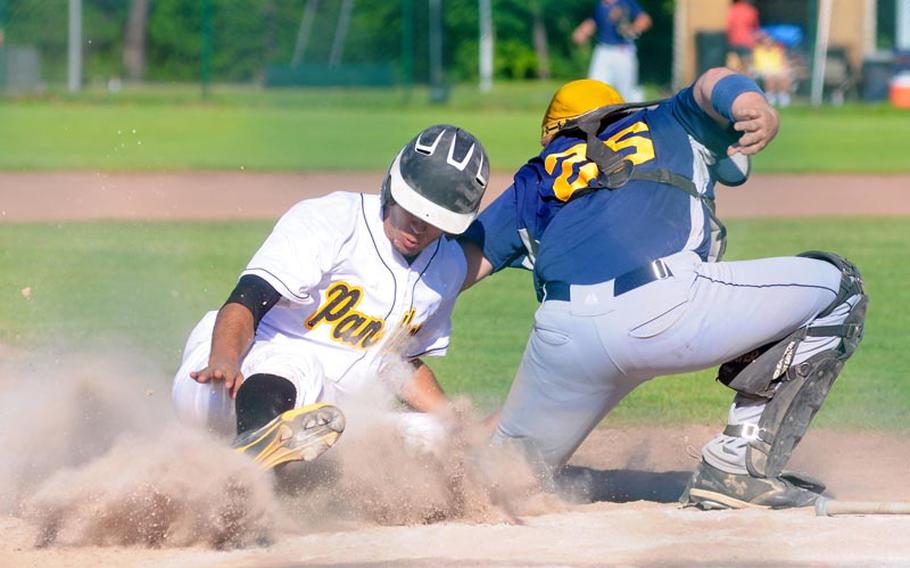 Patch's Ruben Rodriquez safely slides home as Heidelberg's catcher Caelan Allmon attmepts to tag him out during a Division I semifinal game of the DODDS European baseball championships. (David Rogers/Stars and Stripes) Heidelberg's Alex Weaver throws home in an attempt to keep Patch's Andrew Mineni from scoring during a Division I semifinal game in the European baseball championships. Mineni arrived safely. (David Rogers/Stars and Stripes)

&ldquo;We looked to our seniors and said we&rsquo;re not losing this game,&rdquo; said Dylan Measells of the mood in the Patch dugout after some uncharacteristically sloppy defense had landed the Panthers in a 7-2 hole. &ldquo;This is not the way we&rsquo;re going to go out as seniors.&rdquo;

Senior Ryan Tannenbaum then provided the lion&rsquo;s share of that Panther power. He lined a two-strike grand slam over the right field fence in the fifth that immediately cut the Panthers&rsquo; deficit to 7-6.

Patch tied the game in the sixth when Measells drew a bases-loaded walk, and put the game away with a seven-run explosion in the top of the seventh.

Measells, who relieved starter C.J. Kellogg in the bottom of the fourth with two on and two out and five Heidelberg runs already across the plate in the frame, served up a run-scoring single to Heidelberg&rsquo;s Jimmy McBride before retiring the side on a groundout. He then pitched two innings of one-hit ball, striking out four and collecting the win when Patch posted its big seventh.

Austin LeMay pitched the bottom of the seventh when Measells left to preserve his innings-pitched eligibility to start Saturday&rsquo;s title game against Ramstein, which defeated Lakenheath 8-2 in the other Friday semifinal, which didn't end until late into the evening.

Tannenbaum&rsquo;s slam brought Patch most of the way back. He lunged at consecutive fast balls low and away before connecting on a pitch up in the zone for the game-changing blow.

&ldquo;I was swinging for the fences on the first two,&rdquo; Tannenbaum said. &ldquo;I told myself to calm down and just get a base hit.&rdquo;

Jack Smith also homered, a two-run shot to right center to give Patch a 2-0 first-inning edge, and the Panthers banged out four hits in the decisive seventh to capitalize on two Heidelberg errors, a walk and a hit batsman. Catcher Ruben Rodriguez was the power source in that frame, sending a two run double into the right field corner to lead the inning off, and then lofting a deep sacrifice fly to center to plate Patch&rsquo;s final run.

&ldquo;I was just trying to get on base,&rdquo; Rodriguez said of his leadoff double. &ldquo;The pitch was low and away and I just went with it.&rdquo;

Reliever Austin Benton took the loss for Heidelberg, which dropped two one-run verdicts to Patch during the regular season. He allowed five hits, walked four and hit a batter in his one-and-two-thirds innings of work.

Rodriguez shrugged off any implications Friday&rsquo;s come-from-behind game might have for Saturday&rsquo;s finale. It&rsquo;ll be more of the same, he predicted.

Naples, SHAPE rolling alongThe two top seeds in the combined Division II-Division III tournament completed the first two days without a loss. Top-ranked Naples, which has only lost once this season, downed Rota 7-3 in one quarterfinal and will meet No. 4 Bitburg in one Saturday mornning semifinal. The defending champion Barons routed Ansbach 17-2 in their Friday game. SHAPE, the No. 2 seed, steamrolled Baumholder 15-0 and will meet last year&rsquo;s runner-up Vicenza in the other semifinal. The Cougars, seeded fifth, knocked off fourth-seed and northern Italy rival Aviano 11-5.