Panthers appear to be team to beat again on mats 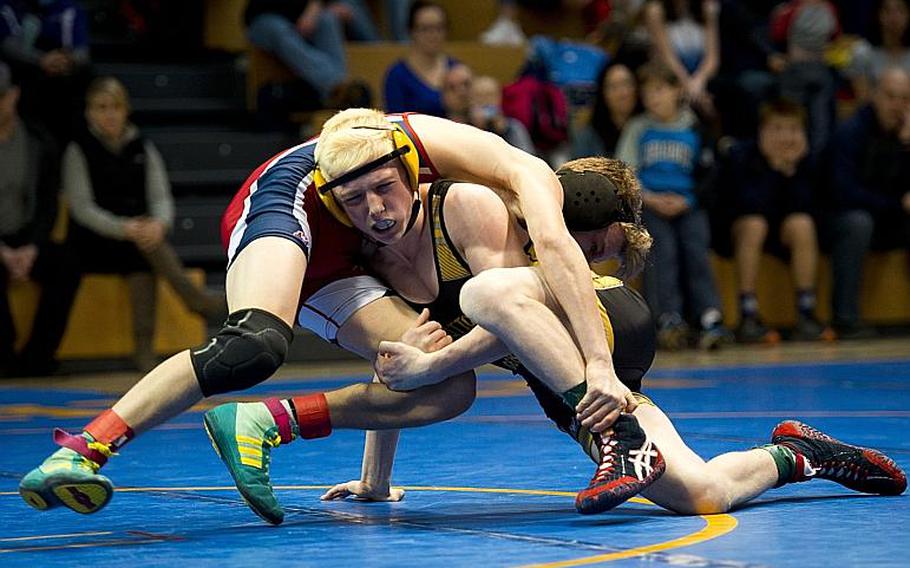 Stuttgart's Benjamin Fielding, right, tries to get out from under Aviano's Liam Knowles during the DODEA-Europe wrestling championship in Wiesbaden, Germany, on Saturday, Feb. 18, 2017. Fielding pinned Knowles to win the 126-pound weight class. (Michael B. Keller/Stars and Stripes)

Mats from Lakenheath to Naples will unroll Saturday as the 2017-18 DODEA-Europe wrestling season begins with four meets in three countries.

The Stuttgart Panthers will play host to one of those four opening meets. While five schools will be in town for the event, the Panthers will also be competing against their own stellar history and high expectations.

Stuttgart has locked in a seemingly unbreakable hold on DODEA-Europe wrestling. The Panthers won their fourth straight Division I team championship in February, outscoring runner-up Ramstein by a 35-point margin. Six Stuttgart grapplers claimed weight-class titles as the Panthers again dominated the finals.

This year’s group looks to have the manpower to extend the Stuttgart streak. Coach Norm Matzke has 17 wrestlers back from a year ago, with plenty of depth and competition to produce high-level contenders at all or most of the 14 weight classes in play.

One Panther who knows a lot about that weight-class format is Benjamin Fielding. The junior has spent his esteemed DODEA-Europe career collecting middleweight divisional championships, starting at 120 pounds as a freshman and continuing at 126 as a sophomore. This year, the reigning Stars and Stripes wrestling Athlete of the Year looks to add the 132-pound title to his trophy case.

Meanwhile, there’s nowhere else to go for another Panther returning champion. Junior John Carroll is back to defend his title at the 285-pound heavyweight level.

While Stuttgart looks strong, it’s unclear whether rival Ramstein will have the roster to mount its usual level of resistance. The Royals are in a rebuilding year, with reigning 120-pound champion champion Josh Garcia, now competing at 126, the unquestioned leader of a group otherwise light on tournament experience.

Wiesbaden and Kaiserslautern, respective third-place and fourth-place finishers a year ago, hope to take advantage of that vulnerability to raise their respective profiles in Division I. Both programs feature well-tested leaders, including Wiesbaden’s Atreyu Allen and Joshua Theodore and Kaiserslautern’s Conner Mackie and Royce Staley.

Though southwest Germany controlled Division I last winter, outlying schools such as SHAPE, Lakenheath, Naples, Vicenza and Vilseck have the opportunity to interlope this season. Naples’ Jackson Blivin and Vilseck’s Juan Oestreich are candidates to lead their teams to strong showings at the European finals.

However, Aviano might again be Italy’s best hope for major success at the tournament. The defending Division II champions boast a 20-wrestler roster featuring seven returning tournament qualifiers, including European finalists Jacob Gamboa and Liam Knowles. The Spangdahlem Sentinels, who finished second in Division II last year in their final year as the Bitburg Barons, field a small but promising group of grapplers, while third-place finisher Rota has 12 wrestlers with which to craft another title bid.

The Division III title race will again feature Baumholder, which won a year ago, and Sigonella, which has a 15-deep roster and young talent that should allow it to contend this year.