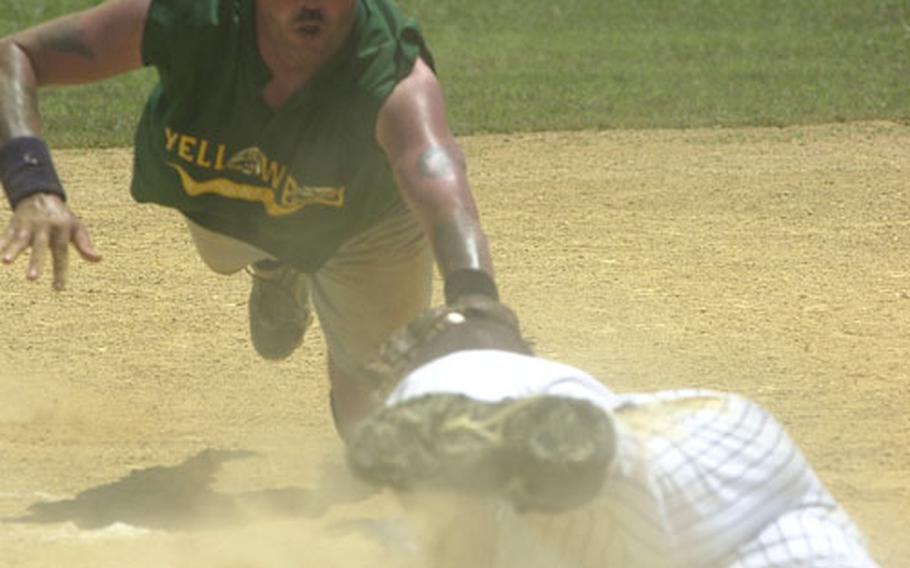 Goff, a first-year Pacific Force third baseman, cranked two homers and went 4-for-5 with four RBIs and Pacific Force poured nine runs across in the second inning and 11 in the seventh to beat Yellow Box 26-12 in a one-game all-Okinawa men&#8217;s final at Foster Field 1.

Goff is one of four players from Okinawa&#8217;s Kadena Air Base selected to the Air Force camp, scheduled for July 31-Aug. 17 at Eglin Air Force Base, Fla. He&#8217;s joined by Pacific Force teammate Scott Roe and Yellow Box&#8217;s Dexter High and Dan Miller.

High had three hits, including a solo homer, and three RBIs, and Eric Rossignol homered and drove in three runs for Yellow Box.

Leadoff batter Mandy Snyder sparked TPS to the Firecracker women&#8217;s title by batting 4-for-4 with a double and scoring four times in an 18-9 triumph over Yongsan Garrison.

His Diamonds, who won the Yongsan Pacificwide Invitational in May, are now halfway to a seasonal Grand Slam sweep, something no women&#8217;s team has ever done.

TPS pulled away by scoring eight runs in the second inning, then survived a six-run onslaught by Yongsan in the fifth in a game halted after five innings due to the 75-minute time limit.

Peni Neri, a former Air Force shortstop, went 2-for-2 off the bench in her first action since suffering a knee injury earlier this spring.

It was the second time in less than 24 hours that the Hustlers, a combination of players from Yongsan, Camp Hovey and Western Corridor, rallied past Casey. The Hustlers trailed Casey 31-20 entering the seventh inning of Saturday&#8217;s winner&#8217;s bracket final, and scored 12 times to win.