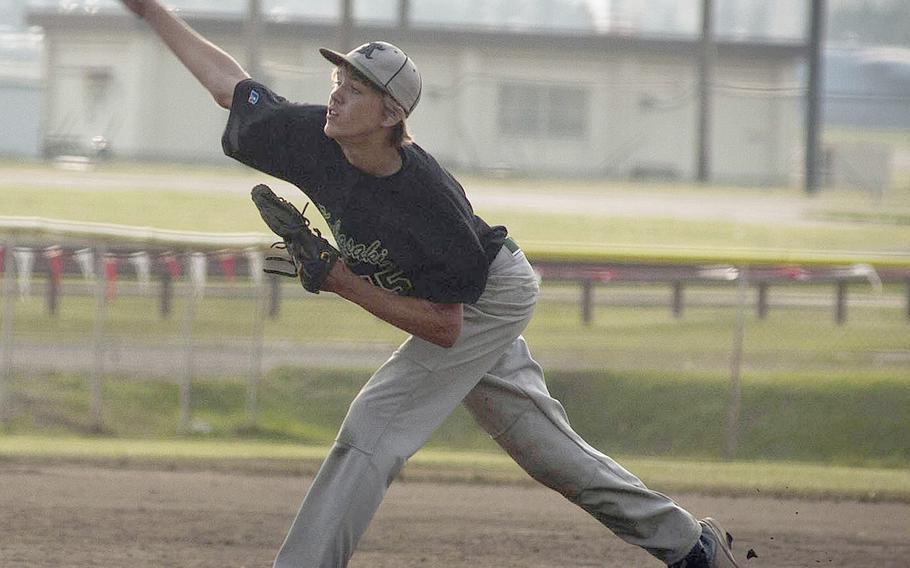 Renton Poole, a right-hander who pitched for Kubasaki in 2013-14, has been drafted by the Texas Rangers of the American League. (Eric Guzman/Stars and Stripes)

Kubasaki baseball coach Randy Toor says he would have loved to have kept Renton Poole for his senior year. But now that the hard-throwing right-hander, who helped the Dragons win the 2013 Far East Division I Tournament title, has been selected by Texas in the Major League Baseball Draft, Toor says he felt even five seasons ago that Poole might have the tools to play at a higher level.

Poole, 21, who most recently pitched for Indiana State University-Kokomo, was taken with the 839th pick in the 28th round of the MLB Draft earlier this month. Poole played his freshman, sophomore and junior years at Kubasaki before leaving and playing his senior season at Bloomington South (Ind.).

Poole pitched at Olney Central (Ill.) and Indiana State-Terre Haute before completing his college career at ISU-Kokomo. He went 7-2 this season with a 2.28 ERA, was named the NAIA River States Conference Pitcher of the Year and an honorable mention NAIA All-American.

“He had the pitcher’s body; he was tall, lanky and he had the work ethic of a top pitcher,” Toor said.

He recalled how Poole would remain after practice to keep throwing, possessing what Toor called the work ethic of a Japanese pitcher.

“He had good control, he struck out a lot of batters, he had a great slider,” Toor said. “We were sorry to see him leave before his senior year, but it’s clear he became a better pitcher.”