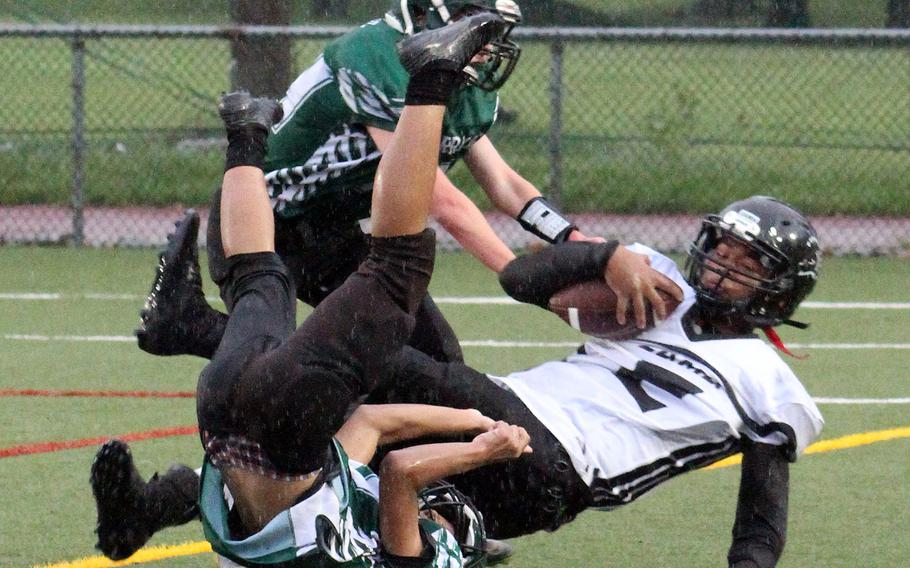 Zama's Keshawn McNeill gets wrapped up by Daegu's Jayson McCode and and Andrew Reeves. (Lexie Berry/Special to Stripes) 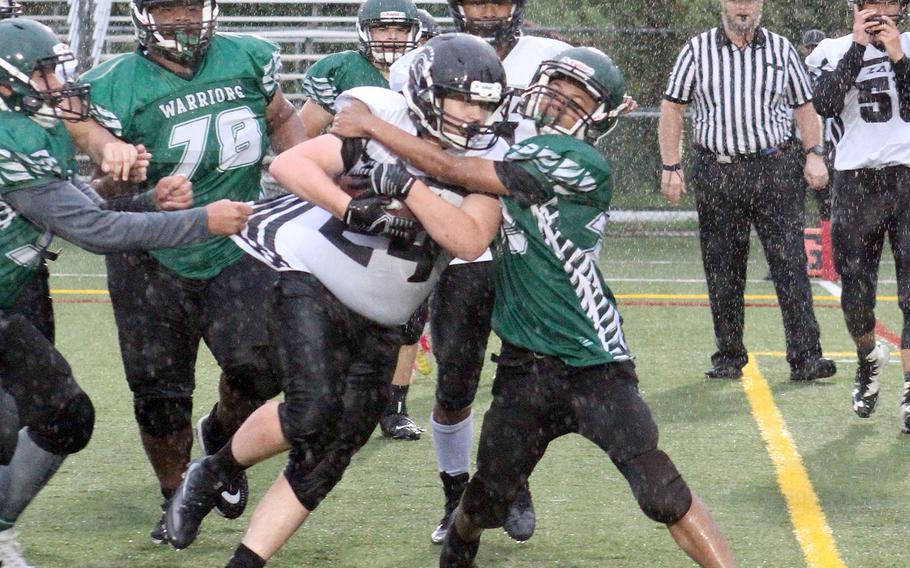 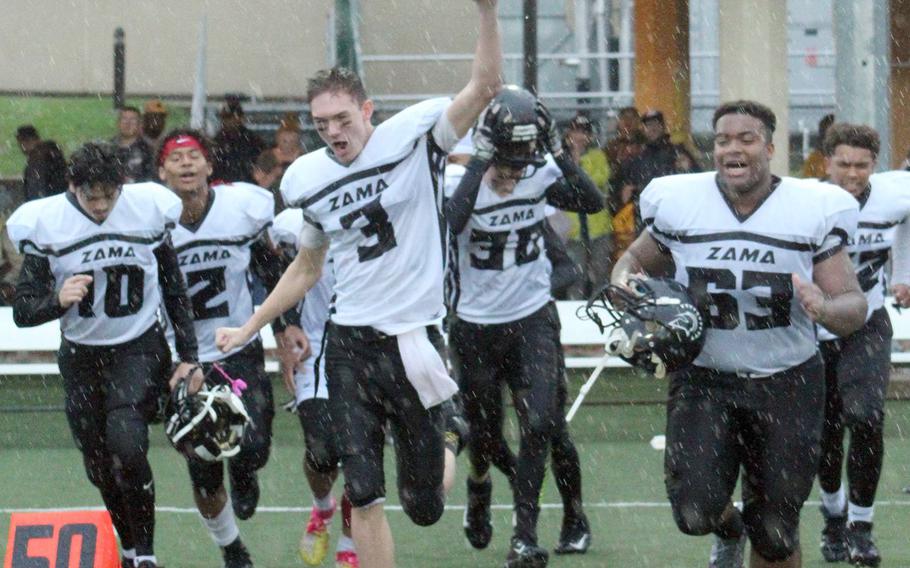 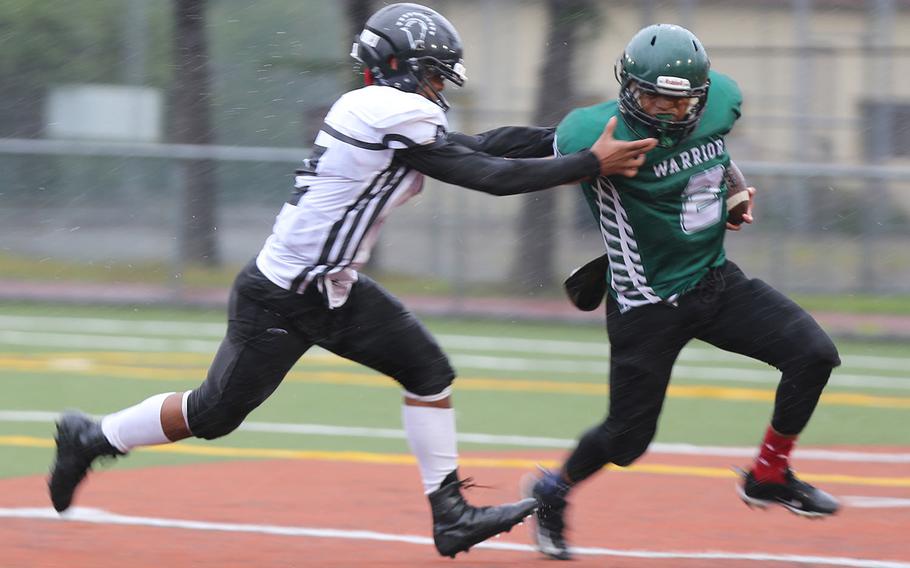 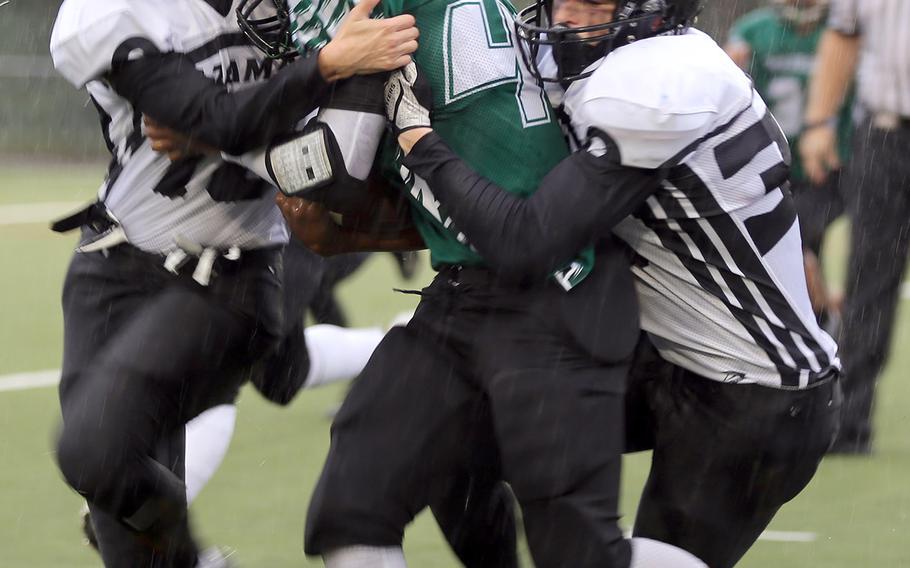 Daegu running back Princeton Newbold is brought down by Zama defenders Cody Sessions and Josh Reilly. (Katrina Vasquez/Special to Stripes) 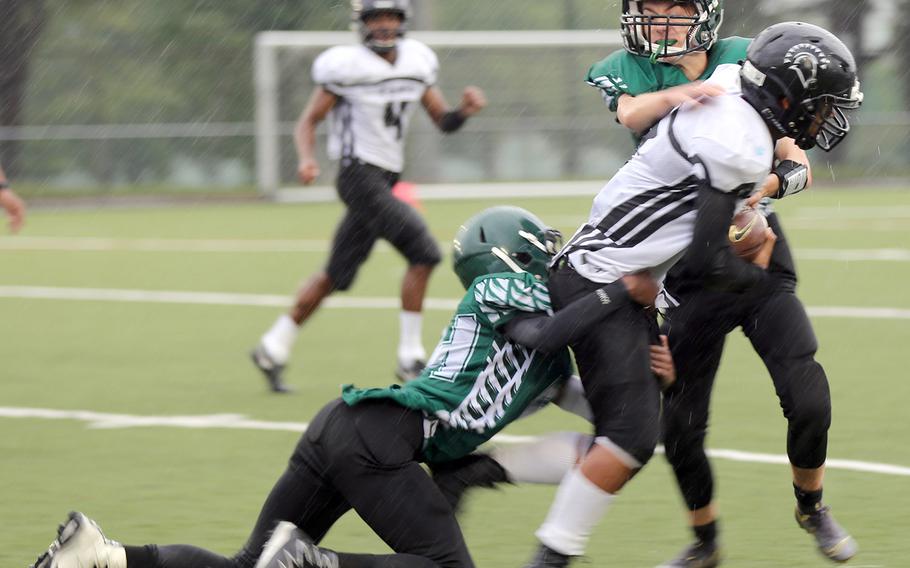 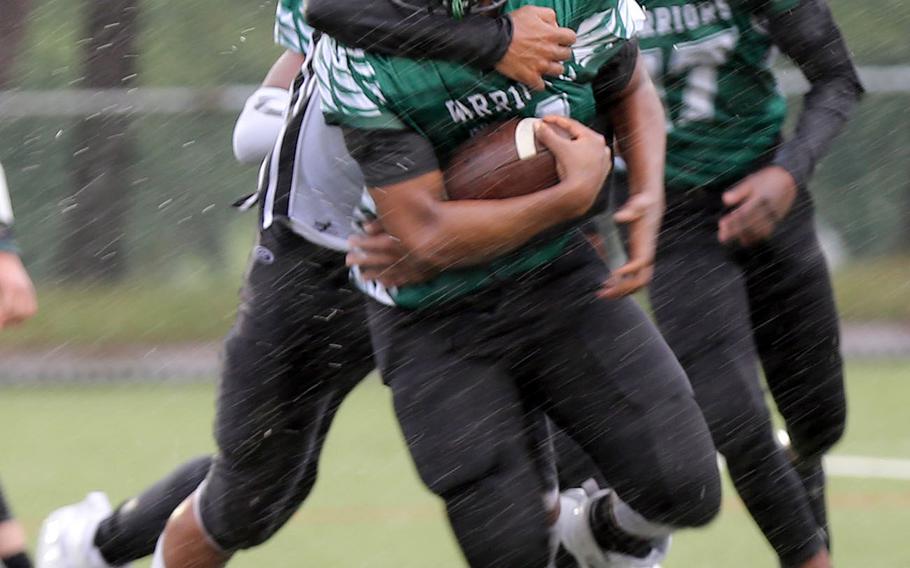 CAMP WALKER, South Korea – Attempting to navigate nine-man football for the first time in school history and playing in rain that at times blew in sideways, Zama handled both on Saturday quite easily.

Senior quarterback Tim Matelski threw for three touchdowns and ran for a fourth, Luke Singer caught a TD pass and rushed for a score and Keshawn McNeill racked up 135 all-purpose yards as the Trojans routed Daegu 36-0 at Kelly Field.

“The kids did a really good job of transitioning to nine-man football without having to adapt too much,” said coach Scott Bolin of the Trojans (2-0), who moved into a first-place tie atop the Far East Division II standings with Matthew C. Perry.

The game was called at halftime when the Warriors fell short of enough players to continue the game safely, Daegu coach Blake Sims said.

“The challenges we have as a small school,” Sims said.

Playing with two fewer players than they normally do, Zama was able to spread things out and take advantage of open spaces on the field, Bolin said.

“It allowed our players to maximize the field,” he said. “We were able to adjust our scheme and the kids really executed and handled the changes well. They did a good job of taking advantage of those opportunities.”

From 20 minutes before kickoff all the way through the one half of play, rain came in hard over Kelly Field, blowing in sideways due to the approach of Tropical Storm Tapah from the south.

“In spite of the weather, we were able to do what we needed to do,” Bolin said. “The kids did a great job of operating in adverse conditions.”

Matelski ran 45 yards for one touchdown and threw for scoring passes of 10 and 4 yards to Chandler Platt and one for 4 yards to Singer. Zama also forced three takeaways, which gave them excellent field position throughout the half.

The Warriors (0-2) next travel to Perry for a Saturday showdown; kickoff is at 7 p.m. at Samurai Field.

Next for the Trojans is a rematch of last year’s Far East Division II final, won by Osan 24-20. The game is scheduled for a 6 p.m. Saturday kickoff at Naval Air Facility Atsugi’s Reid Memorial Stadium.