Yokota now a big fish in a smaller pond 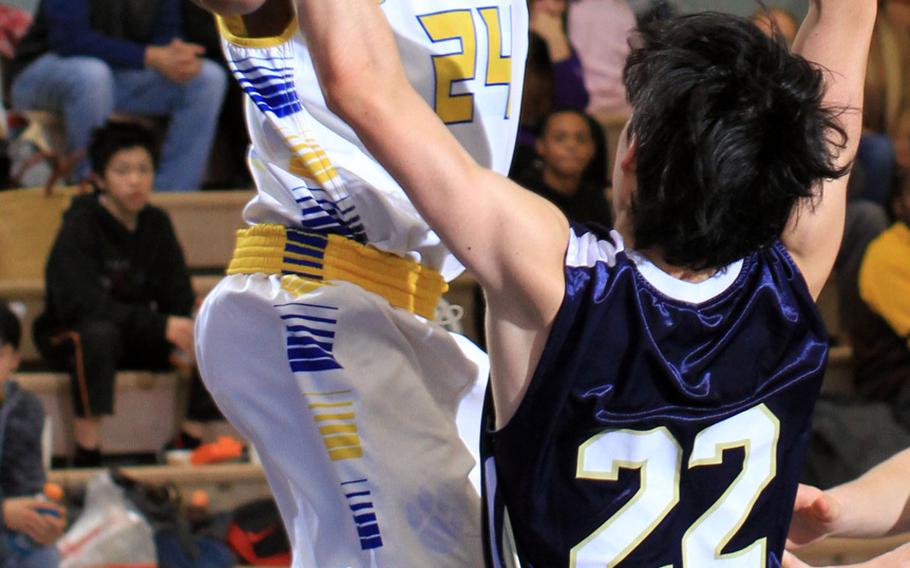 Senior guard Jadan Anderson has averaged 24.3 points per game in Yokota's seven games this season, all victories. (Tyler Espinosa/Special to Stars and Stripes)

Senior guard Jadan Anderson has averaged 24.3 points per game in Yokota's seven games this season, all victories. (Tyler Espinosa/Special to Stars and Stripes) 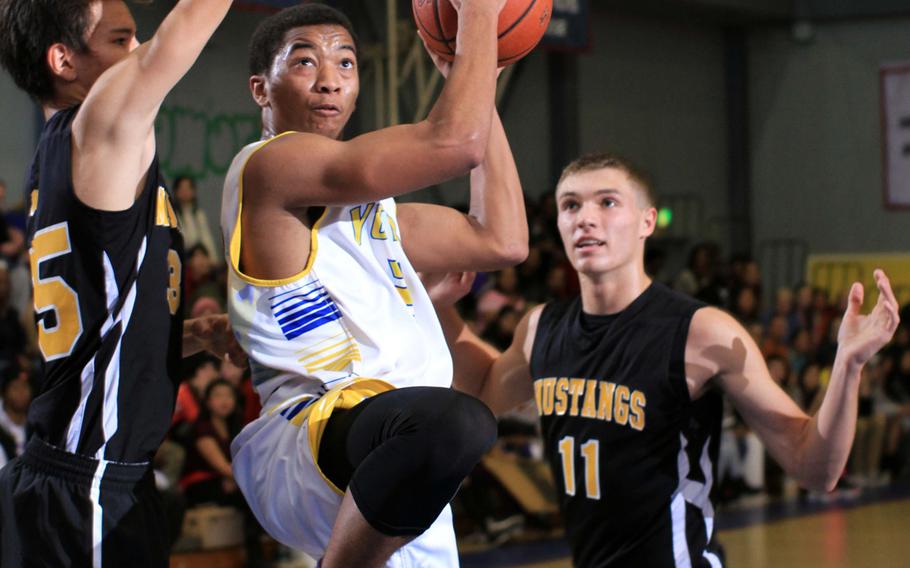 Jarmarvin Harvey, with ball, and Yokota's boys have gone 7-0 this season and in this game downed 2013 Far East Division I champion American School In Japan 90-59. (Tyler Espinosa/Special to Stars and Stripes)

For the first time in its 42-year history, Yokota is getting used to life being classified as a small school.

Long a dominant force in Division I, the school was shifted down Nov. 20 to Division II because of declining enrollment.

The Panther basketball teams haven’t had much trouble with teams from any division at this point. The boys and girls teams have won all seven games, the boys by a margin of 37.7 and the girls 23.7. Five of those opponents are in Division I.

But that, DODDS Pacific officials say, disguises the fact that Yokota’s program as a whole the last 10 years has not kept pace with the rest of the D-I pack, timed with a steady drop in enrollment, from 400 in 2004 to 277 as of Jan. 2.

“It’s the right thing to do for the kids,” longtime Yokota athletics director and football coach Tim Pujol said.

While there is the perception that Yokota is an alpha dog on the D-I block, Pujol said since 2005, it’s won just four Far East banners: two football, one boys basketball and one girls tennis.

“We haven’t been competitive in most sports most years,” he said.

Yokota not only had the smallest enrollment for a DODDS Pacific D-I school – Nile C. Kinnick is next with 594 – but it actually had less than Zama (314), which was competing in D-II.

“I have to do what’s right according to the numbers,” DODDS Pacific Athletics Coordinator Don Hobbs said while announcing the change.

In an interview in September, Hobbs said he intended to keep Yokota at D-I through the school year. But when enrollment numbers remained in the 275 range, he felt a change had to be made.

Several coaches said that the school’s reputation as a bastion of sports excellence has in recent years exceeded results.

“We’ve had a hard time finding four girls to fill out a whole team,” cross country coach Dan Galvin said. “And it’s not like there are athletes in the school looking for something to do. You get schools that are twice as big or bigger, you can’t compete against them.”

Galvin and Pujol each pointed to last spring’s Far East track meet at Yokota, where the Panthers scored 72 points but finished fourth in the D-I standings, while Zama scored 30 and won the D-II banner.

“On our track. In front of their parents,” Pujol said. “Each of those kids knew that Zama had 10 more students at their school but they were competing against D-I schools. That’s hard for them to justify how to accept that it’s right.”

“Some of our teams can now go into a Far East tournament and think they have a chance to do something, they’re not just going in for a week of playing some games,” Galvin said. “It makes the experience a whole lot better for them.”

Yokota’s move to D-II was met in some circles with frustration. Defending boys D-II basketball champion Daegu already had a high mountain to climb, given it lost all its key pieces, and it just got higher.

“I wouldn’t be surprised if Yokota is the eventual champion,” Warriors coach Phillip Loyd said. “No one’s convinced it will be an even playing field. Still, the games have to be played.”

Others greeted the move with resigned acceptance. “The powers that be made the decision,” Matthew C. Perry girls coach April Kelley said. “We have to rise up no matter who we play and do the best we can in that situation.”

There are some schools in the Pacific that field programs that seem to be competitive no matter what level they’re playing at. Perry has 145 students as of Jan. 2 – smallest in DODDS Pacific – but Mark Lange coaches a boys soccer program that’s won three straight D-II titles, gone 60-13-8 in that span and won the DODDS Japan tournament, beating D-I power Kinnick 1-0 in the final.

“Could we do it? Absolutely,” Lange said of his Samurai playing up, citing a weekend series two seasons ago against two-time D-I champion Kadena that the teams split. “I think we can play with those teams. I don’t see why we couldn’t.”

But such programs are exceptions and many argue that such success might not be sustainable with a small enrollment base.

“Right now, yes,” E.J. King boys basketball coach Scott Jarrard said of Yokota’s chances in D-I this season. “But what will they have next year? They just happen to have the personnel to play D-I this year, but you never know what you’ll get in DODDS.”

“That could shift,” Hobbs agreed. “We don’t know what’s going to happen next year or two years from now.”

He’s already been approached, Hobbs said, by those who believe – especially in basketball – that Yokota will scythe through the D-II opposition and “haul down all the trophies.”

His response to D-II schools?

“Don’t just settle for second place,” Hobbs said. “Rise to their level. I have to go by the numbers and I have no concrete evidence that their numbers are going to increase by 50 to 100 students. Get kids out, coach them, get them in condition and build a program.”