Weather, injuries, defending champs too much for Guam 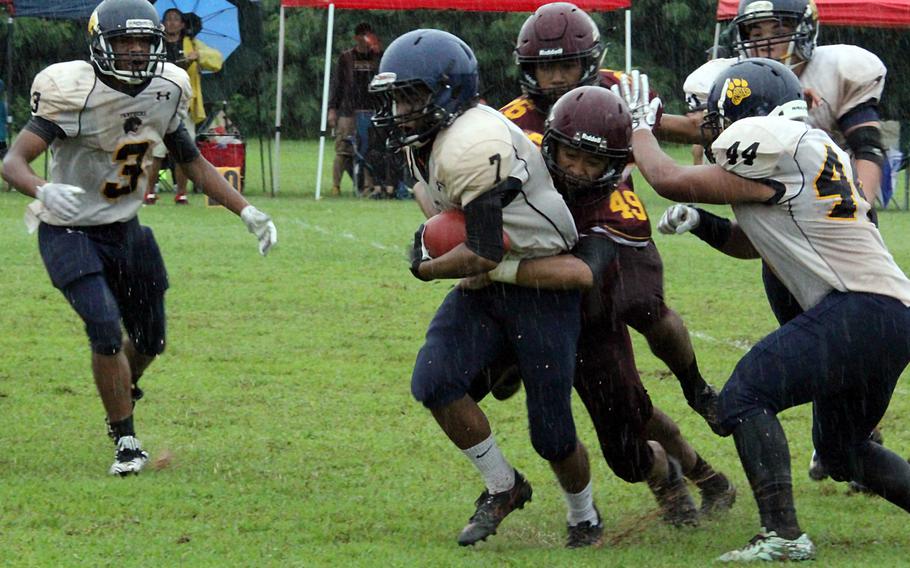 Guam running back Tyrone Rosario struggles through the pouring rain and the defense of two-time island champion Father Duenas Memorial, which blanked the Panthers 30-0 Saturday. (Donna Rhodes/Special to Stripes)

Together, they combined to doom the Panthers, who lost their second straight game by shutout, 30-0, to the Friars. Guam has not scored since a safety late in its 8-7 season-opening win over Tiyan, a span of nine quarters.

“It was that kind of day,” Panthers coach Jacob Dowdell said. “The advantage played heavily into their (Friars’) favor.”

The weather made a muck of University of Guam’s Tritons Field, hosting Interscholastic Football League games this season out of necessity with two of the league’s regular fields out of commission.

The teams combined for 27 fumbles. Making matters worse for Guam, its second-string quarterback Brian Mitchell went down with an injury. With Travon Jacobs, the starter going into the season, already injured, Dowdell was forced to move his top receiver, RaSean Jacobs, back to quarterback. He responded with 65 yards’ total offense, the team’s lone bright spot on the day.

“We’re just trying to maintain until we get some people back,” Dowdell said.

The Friars, 3-0 and having outscored opponents 95-6, visit Southern next Saturday at 10 a.m. Guam entertains John F. Kennedy on Friday at 7 p.m.