There's plenty of credit to go around for Paylor's success 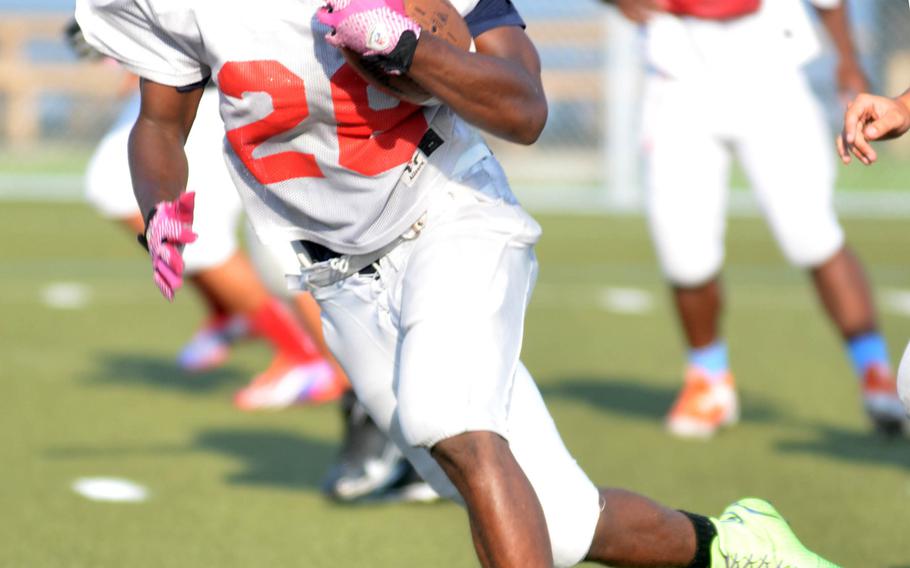 Nile C. Kinnick junior Dre Paylor became just the second running back in Pacific history with more than 2,000 yards in a season last fall. Paylor had a Pacific-record 445 yards on 27 carries with five touchdowns Friday in Kinnick's 36-23 win at Yokota. (Dave Ornauer/Stars and Stripes)

It’s as exclusive a club as there is in Pacific high school football. There are two members: running backs who have held the region’s single-game rushing record and have posted 2,000-yard seasons.

First came Corey Dunlap-Buckmon, who had 384 yards in a game and rushed for a record 2,088 yards in the 2001 season for Simon Sanchez of Guam. Now, there’s Dre Paylor, a Nile C. Kinnick junior who last season ran for 2,002 yards and on Friday ran for 445 yards with five touchdowns in a 36-23 win at Yokota. But you don’t get into this club without some help.

In addition to his own abilities and skill, it takes a team, Paylor says. It takes hard work in the offseason and during practice. It takes skilled linemen. It takes coaching.

“It starts with the coaches and goes all the way down,” Kinnick coach Dan Joley said. “The best thing about the kids … is there’s no egos on this team. The kids who are part of this program take that mentality.”

It takes the “grit, determination and passion” of the running back. “He gets a lot of his yards inside the tackles,” Joley said. “We run a lot of our offensive sets inside and he’s not afraid to put his head down and run. We do what we can to get Dre out in space.”

“I like the contact” of running up the gut, Paylor said. “It gets me more pumped. I want to carry somebody. Every time somebody hits me, I want to carry them into the end zone.”

It takes a back who has the ability to create in the occasional instance when a lineman misses a block. “I see that as a challenge,” Paylor said of ad-libbing when things look bottled up. “If they miss a block, somebody else comes and picks them up. When a mistake happens in the line, I make one move.”

“He doesn’t need to do a lot of extra moves to get by people,” said Robert D. Edgren coach Bill Schofield. “He literally runs north-south. Unless you tackle him perfectly, you’re not going to take him down.”

It takes linemen willing to do their part to free up the running back to make the gains. Linemen who see the name of the star back in the headlines as a compliment to them as well.

“I’ve been blocking for Dre for three years (and) I’m happy that the work has been paying off,” said senior lineman Alaka’i Warford.

It takes linemen who are willing to play different positions, to be diverse and perform various roles to create that space for Paylor.

“We are able to take guards and tackles and flip positions, and that’s benefitted us,” Wilson said. “They’re all tight, close, they care about each other and want to do well and switch spots when it’s needed.”

It takes linemen who are not only big – the Red Devils average 245 tackle-to-tackle – but fast and block well past the line of scrimmage.

“We ask our linemen to pull a lot and work downfield,” Joley said. “On any given play, you might have two 250-pound linemen working 10 yards downfield. They’re big, strong, large, athletic and we ask that they be smart. They have to have a good understanding of football to adapt to what the defense shows us.”

It takes assistant coaches willing to make linemen want to be linemen. Joley credits Wilson and another assistant, Kevin Warford, for that.

“They bring energy, knowledge and passion, just excitement for kids to be a lineman,” Joley said. “They glamorize the position. They work well with the kids in selling the fact that the line brings success to the team. And the kids love being linemen.”

It takes staying focused on the goals, both team and individual, and forgetting about past seasons gone awry. Kinnick opened 2013 5-0 and won its first DODDS Japan title, then lost five of its last six.

“I don’t think I’ve heard anybody say anything about last year,” Joley said. “There’s a very positive vibe with this group and they don’t look past their next opponent. Just take care of what is in front of you and good things will happen.”

At one point last offseason, Paylor considered transferring back to his old school in Houston, but ultimately stayed at Kinnick to “finish what I started,” he said. “I didn’t want to just get up and leave after all the accomplishments. I wanted to stay and finish with my teammates.”

Paylor leads the Pacific with 1,224 yards and 17 touchdowns on 106 carries. If Kinnick reaches its first Far East Division I title game, that would leave Paylor with three games to try to eclipse 2,000 yards for a second straight season. He’d have to average 259 yards.

“To see Dre get 2,000 in my senior season would be great,” the younger Warford said.

“I’d be happy for the kids,” Joley said. “The kids have worked hard to garner some respect for the football program at Kinnick.”