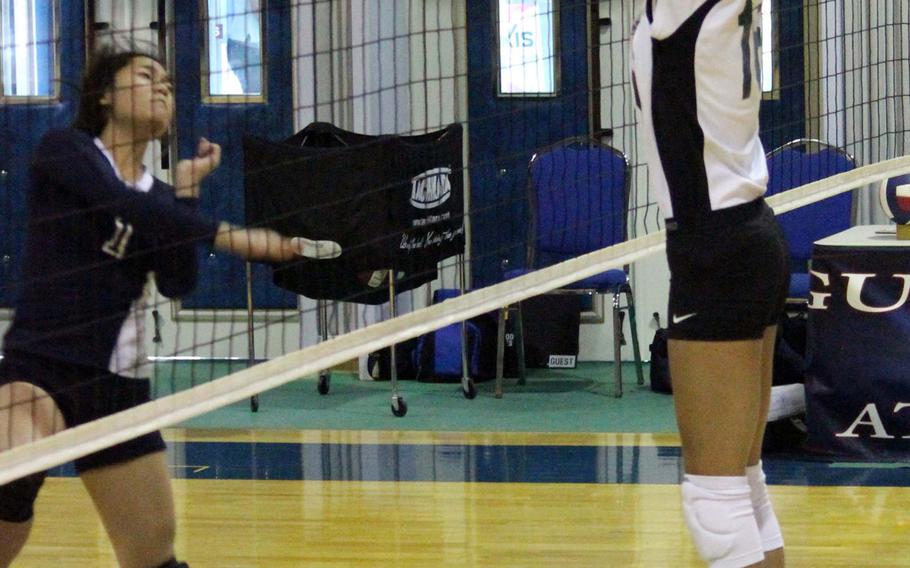 Gentry Miller is an accomplished defender on the soccer pitch; her winning the Korean-American Interscholastic Activities Conference girls tournament’s Best Defender award testifies to it. In just her second year of playing volleyball, the senior is proving pretty fair at playing the libero position. And her Taejon Christian International School team is all the better for it. The Dragons grabbed a share of first place Friday in KAIAC’s Blue Division, handing Daegu its first loss of the season 30-28, 14-25, 25-23, 25-21. Each team ended the night at 7-1. The Warriors had won their first seven matches, all in straight sets. “She’s a defensive monster,” Dragons coach Ashleigh Houlton said. It was a far cry from Daegu’s 25-7, 25-15, 25-20 win at home on Sept. 25. Better defense, led by Miller, plus improved passing to the setter and “amazing” serve receiving helped turn last week’s result around, Houlton said. Daegu played without senior setter Kaitlyn Nott and senior middle blocker Lari Robertson, who remained behind to take SATs on Saturday. That forced coach Joanna Wyche into assembling a rotation on the fly during that match and the first set of Saturday’s four-set win at Yongsan International-Seoul. “Everything was off” on Friday, Wyche said. “It was utter madness last night. So I just took what I had, lost that first set at YIS-Seoul, then gradually got it together and after that, they were outstanding.” Robertson and Nott joined the team in time for the last part of the third set and all of the fourth against the Guardians. Daegu won 13-25, 25-19, 25-20, 25-21, with sisters Rachel and Rheagan Wyche combining for 29 digs. The regular-season champion gets the top seed and a first-round bye into the KAIAC Blue Division tournament, also at YIS-Seoul.