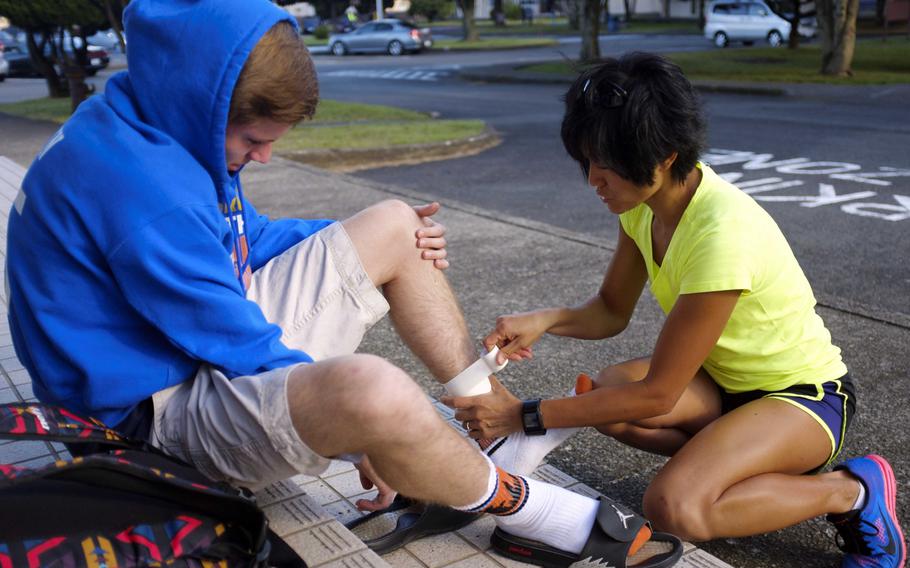 Yokota cross country coach Maggie Chan-Roper tapes junior Daniel Galvin's leg to help manage his shin splint injury during practice Tuesday at Yokota High School. Galvin says he has felt the injury much of the season, but only pulled out of his first race because of it last week. (James Kimber/Stars and Stripes)

YOKOTA AIR BASE, Japan – He got through his first two-plus seasons of running cross country and track and field for Yokota without serious injury.

But now pain in his leg has Panthers junior distance runner – and Far East favorite – Daniel Galvin thinking his season might be over.

He said the pain had been affecting him for two weeks before Thursday’s race, but the degree of pain was so high that he had to pull out.

“It was the most frustrating weekend I’ve had in a long time. I’ve never felt like I have to quit,” said Galvin, Pacific record holder in track and field’s 800 and 1,600 events.

The unofficial diagnosis was medial tibial stress syndrome, or shin splints, runner and his coaches say. According to the American Academy of Orthopaedic Surgeons, shin splints are a pain along the inner edge of the shinbone that, in athletes, is typically caused by tightness of the lower leg muscles.

His coach, former Hong Kong Olympian and NCAA All-American Maggie Chan-Roper, advised him to take ibuprofen to minimize inflammation, tape his leg to compress the muscles and rest during the long weekend. Five days later, she found out he hadn’t done that.

“He should be feeling great by now, but he’s never been injured before so he doesn’t understand that sometimes it just takes patience,” said Chan-Roper, who can be no nonsense in her assessments. “It takes time to learn that it takes time.”

“I didn’t think it was that important,” Galvin said. “And in all honesty, I was so frustrated last week after the race that I wasn’t really listening to [Coach].”

Galvin believes he might have a stress fracture. That would put the brakes on a season that has seen him become the fourth runner in Kanto Plain league history to run the 2.9-mile Tama Hills Recreation course in under 15 minutes, including 14 minutes, 40.9 seconds on Sept. 27. The week before, he ran a Pacific-best 16:08 in a 3.12-mile DODDS meet at Marine Corps Air Station Iwakuni.

He’s clearly the favorite to take home the individual championship at the Far East meet in early November. His best time is 38 seconds better than his nearest competitor, Kadena’s Hunter Ficenec. So there are more than a few people outside the Yokota campus who would be interested in the results of an MRI he had recently at a local hospital. The results are expected in a few days.

If it’s more serious than shin splints, it could remove him from the Far East meet Nov. 3-4 at Camp Fuji and Ikego Heights and USA Track’s national finals in New York City on Nov. 27, which Galvin plans to enter.

Chan-Roper knows a thing or two about stress fractures. Her running resume spans from a record-breaking teen-ager to college stardom at Brigham Young to the professional ranks in Hong Kong. In that time, she suffered stress fractures in four consecutive years that forced her to miss time, including the 2004 Olympic Trials.

“If you take ibuprofen and the pain goes away, it’s not a stress fracture,” Chan-Roper stated simply.

Chan-Roper’s concern in Galvin missing extended time is what she calls “untraining.” Too much time sitting because of improper injury management will cause the body to slip back to less-than-peak performance. With the championships fast approaching, this is not the time to regress.

Galvin has been working out to ensure his endurance levels remain high for the upcoming races. In addition to swimming and bike riding, he’s been focusing on core workouts to improve overall strength and conditioning.

Chan-Roper said there are techniques a runner can take to minimize shin splints.

“There are preventative exercises runners need to practice like running backwards and toe tapping which help build the inner leg muscles,”

Chan-Roper said. “We will need to focus on those exercises more later.” Regardless of the diagnosis, Galvin said he’d like to run at least once more this season.

“If it’s the worst case scenario and I have a stress fracture, I’ll probably beg my parents to let me run one last time at the DODDS championship. I’m pretty confident I can win that title even with a stress fracture.”