Boys track Athlete of the Year 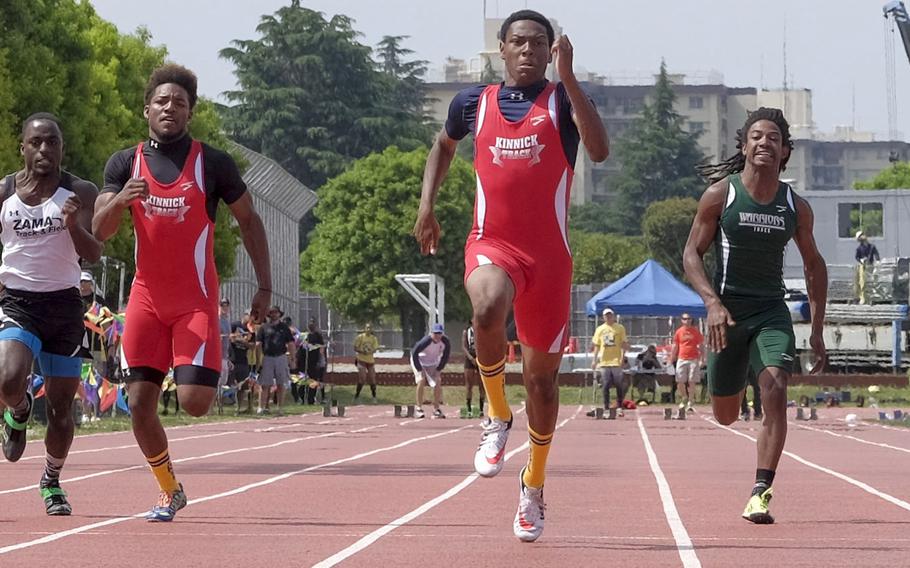 YOKOSUKA NAVAL BASE, Japan – Jabari Johnson came off the track after winning 200-meter dash in last month’s Far East meet with the same demeanor following his defeat in the 400 just a few events earlier – silent and stoic.

Johnson had just finished clocking the 200 in 22.08 seconds on May 22, a tad slower than when he set the meet record of 21.99 during preliminaries the day before, but 3.5 seconds ahead of Seoul American’s Shawn Horne, the guy who rallied past Johnson to win the 400 in an upset.

Asked if the defeat in the 400 served as motivation to win the 200, Johnson, a Nile C. Kinnick junior, replied: “That didn’t bother me. I just come to race.”

“He’s not a big talker at all,” said Red Devils coach Luke Voth. “That’s just him. But he definitely does his talking on the track.”

And when he talks with his feet and legs, they speak volumes.

Johnson helped lead the Red Devils to a Kanto league title and the Far East overall Division I school banner. He holds the Kanto, Far East and Pacific records at 100 meters with a 10.92; broke the Pacific mark in the 200 with a 21.87; and won Far East gold in both events. Though he failed to capture 400 at Far East, he broke his own record in that event earlier this season with a 48.99.

For all those feats, Johnson has been named Stars and Stripes’ Pacific high school boys track and field Athlete of the Year.

Though Johnson’s name is strewn all over those record books, Voth says his sprinter is far from obsessed with making marks, but instead works to improve himself and give his team a fighting chance to win.

“Competition drives him,” Voth said. “To be better and faster than he was before and competition with whoever’s on the track with him, too.”

While Johnson does take note of high Pacific standards, “I think he’s more driven by how much faster he can get,” Voth said.

Johnson indicated he expects to return for his senior season and did suggest that he would like to chase a couple of other records with his teammates, the 400- and 1,600-meter relays. American School In Japan holds the Kanto records in both, 44.01 and 3:28.59; while Kadena has the Pacific records, 43.44 and 3:24.6.