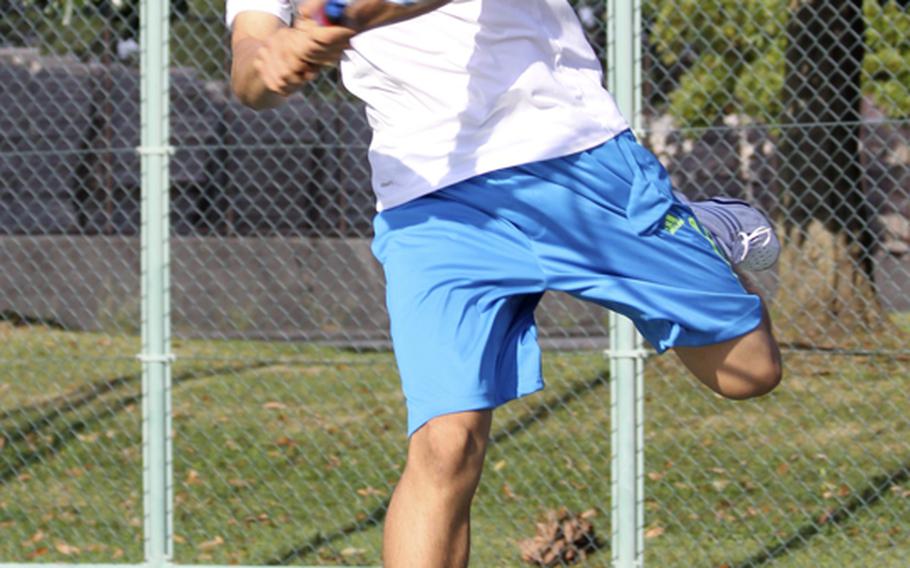 YOKOTA AIR BASE, Japan &ndash; On a searing, muggy day better suited for staying indoors, Arlo Taylor and Kent Shikama battled nearly four hours on Saturday in a tennis match that looked hauntingly like the last time they faced each other.Shikama of St. Mary&rsquo;s International outlasted Taylor of Yokota 3-6, 6-3, 6-4 in the two players'&rsquo; Kanto Plain Association of Secondary Schools regular-season opening match. It was a rematch of last year&rsquo;s Far East tournament boys singles final, which Shikama won in three sets.&ldquo;That was one for the books, one for the ages, an epic battle,&rdquo; Yokota coach Tommy Palmer said.Taylor is a newcomer to Yokota, having spent the previous three seasons playing for Kadena High School on Okinawa.It was there last Nov. 11 that Taylor faced Shikama for the Far East title. Shikama won the first set 6-3, then fell behind 4-0 in each of the next two sets. Taylor leveled the match by winning the second set 7-5, but collapsed in the third set, losing 7-6 (7-5).Saturday&rsquo;s rematch looked very familiar to that. After splitting the the first two sets, Taylor pulled ahead 4-3 and appeared in position to avenge last year&rsquo;s defeat. But Shikama won the next three games to seal the match.&ldquo;Every point, they were swinging for all it was worth,&rdquo; Palmer said.It was the only scheduled match between the two teams and two players during the regular season. The Kanto tennis tournament is scheduled for Nov. 1 at the Shirako Tennis Complex in Chiba Prefecture and Far East is again slated for Kadena Nov. 7-10.&ldquo;They&rsquo;re going to do it a few more times,&rdquo; said Yokota principal Darrell Mood, who watched the match. &ldquo;Some really quality tennis for high school.&rdquo;