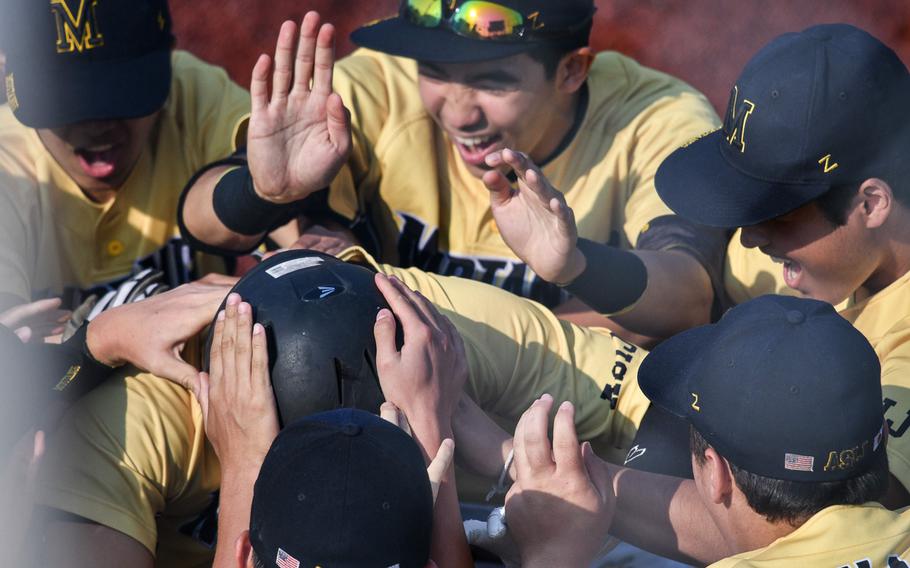 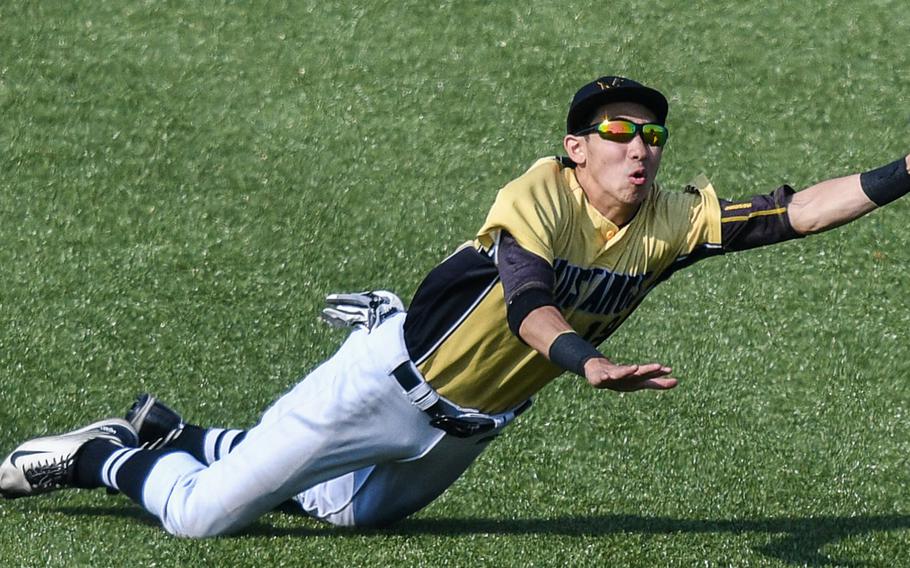 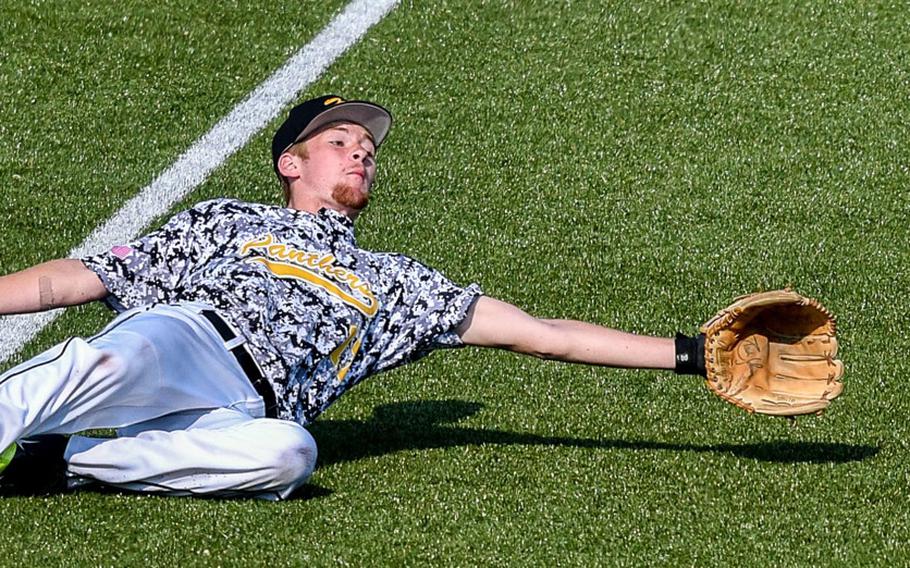 Kadena right-fielder Owen Sinning slides too short of catching up to a foul ball. (Jack Higbee/Special to Stars and Stripes ) 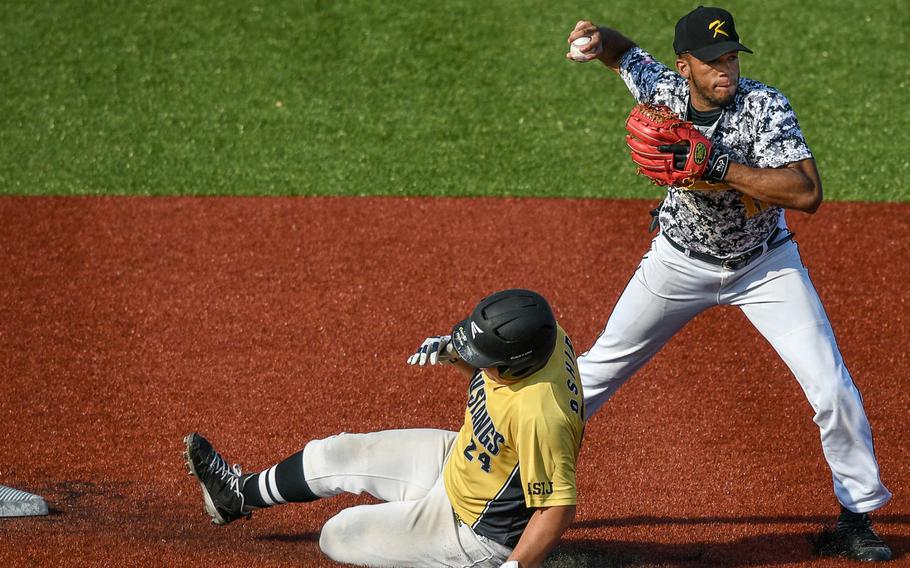 Kadena shortstop Justin Wilson readies a relay throw to first base after erasing American School In Japan baserunner Justin Oshiro at second base. (Jack Higbee/Special to Stars and Stripes ) 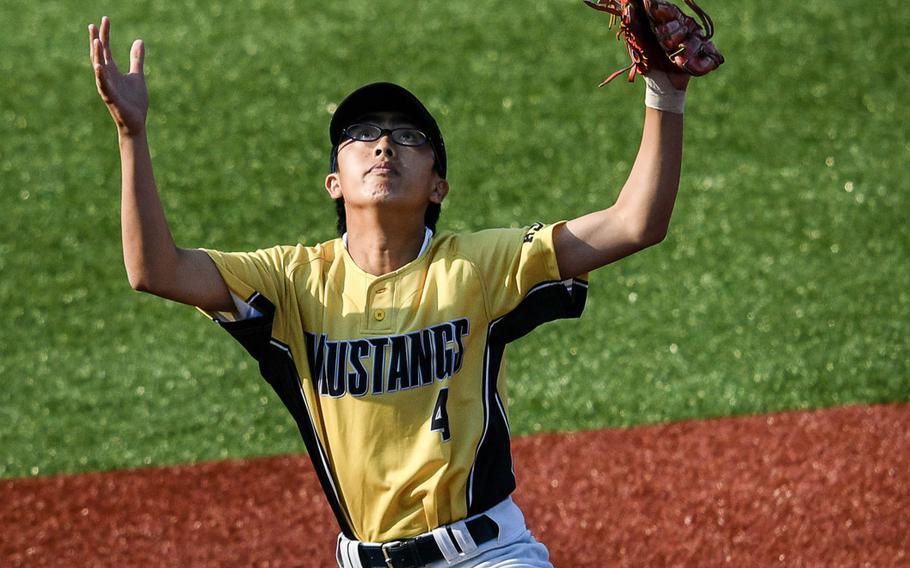 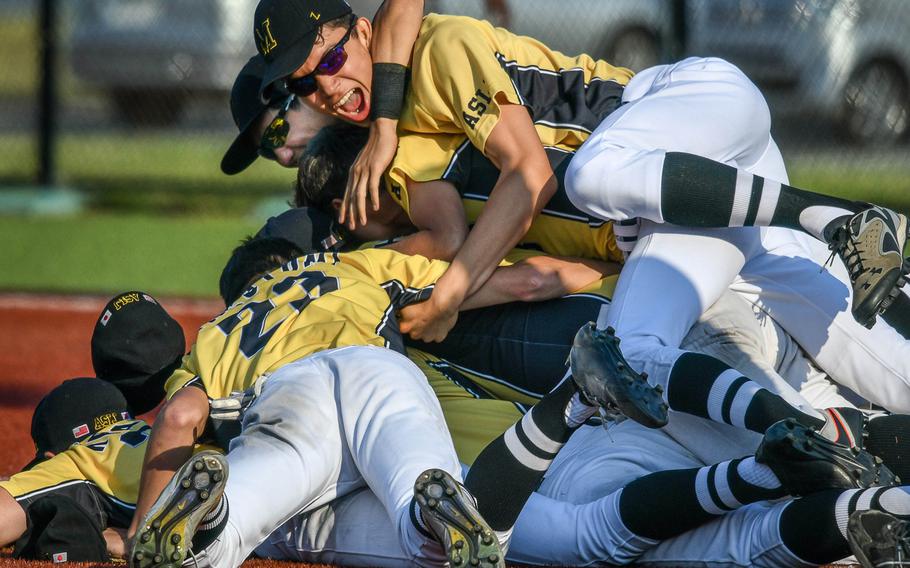 American School In Japan players celebrate at second base following their 3-1 win in Saturday's Far East Division I Baseball Tournament final over Kadena. It was the Mustangs' third straight D-I title and fourth overall. The Panthers lost for the fifth time in as many finals appearances. (Jack Higbee/Special to Stars and Stripes ) 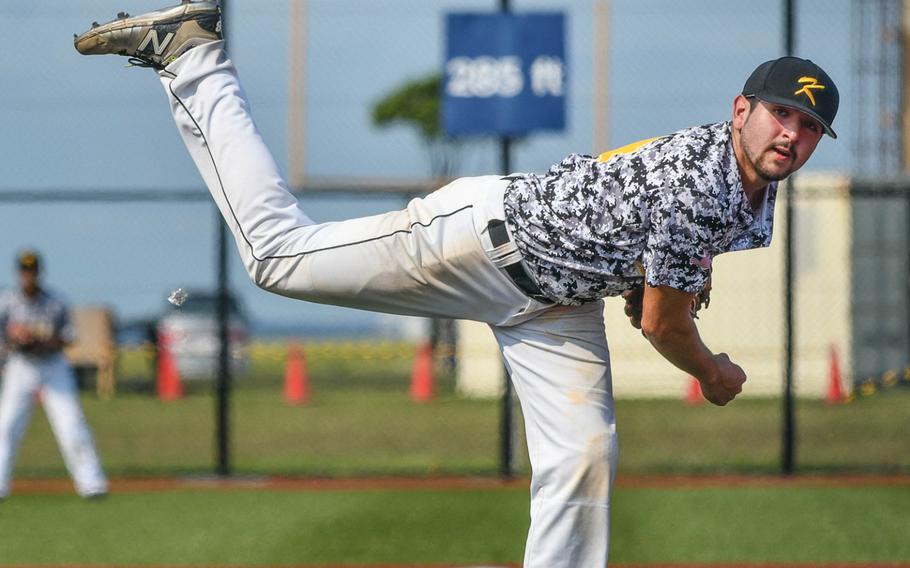 Kadena senior right-hander Jared Jaramillo was touched for five hits and five walks while striking out 13 in taking the loss against American School In Japan. (Jack Higbee/Special to Stars and Stripes ) 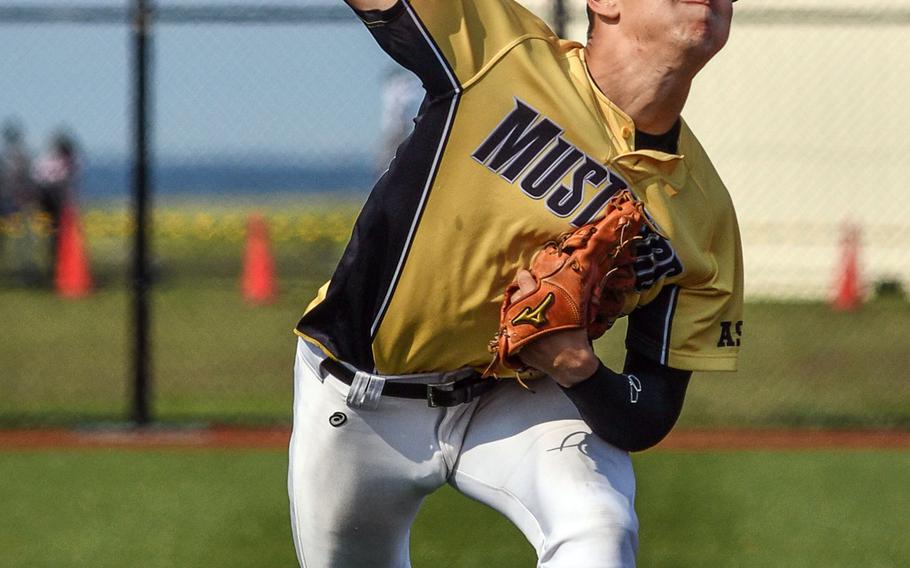 American School In Japan senior right-hander Tyler Sapsford gave up five hits, struck out 13 and hit a two-run third-inning home run that proved to be the game-winner against Kadena. (Jack Higbee/Special to Stars and Stripes )

YOKOSUKA NAVAL BASE, Japan – Coming up aces for American School In Japan - at the plate and on the mound - has simply become a matter of routine for Tyler Sapsford.

For the second straight year, the Mustangs senior right-hander struck out 13 and hit a home run, the latter proving to be the game-winner as ASIJ won its third straight Far East Division I Baseball Tournament title, beating hard-luck Kadena 3-1 in Saturday’s title game.

“Big one today. That was a big ball he hit,” longtime Mustangs coach John Seevers said of Sapsford’s homer, which came in the third inning with none out and Kenji Yoshii on first base.

Sapsford took a delivery from Panthers senior right-hander Jared Jaramillo well past the left-field fence and onto the softball field, a good 350 feet from home plate.

It seemed like an instant replay of the 2015 final, which ASIJ won 12-2 over Kubasaki, when Sapsford hit a leadoff solo second-inning shot. Only this time, the round-tripper came with the game scoreless and Sapsford seemingly matching Jaramillo strikeout for strikeout.

“It was two great athletes battling each other, and he (Sapsford) got the better end of it,” Panthers coach Boe Roberts said.

Saturday’s showdown was the second time the Mustangs faced the Panthers in the D-I final in three years. ASIJ blanked Kadena 3-0 on May 25, 2014.

It was the Mustangs’ fourth title overall in the tournament, while Kadena lost for the fifth time in five championship appearances. Of the three straight titles, Sapsford said the third and last was the most special.

“They’re all pretty great, but the seven seniors I have with me, the guys around me make it special,” said Sapsford, who moves on to Division I Yale next season. “This one would have to top them all. We’ve become family, guys I’ll remember for the rest of my life.”

“This was a very special group, unbelievable work ethic and great chemistry,” Seevers said. “A very classy group that I’m really proud of. I’ve had a lot of them over the years.”

The Panthers, meanwhile, fielded just two seniors, with most of the rest of the team projected to return, Roberts said.

“I’m proud of this young team, the way they handled the pressure,” he said. “I feel bad for the seniors, but this was a good experience for the underclassmen who’ll be back next year.”

At the outset, it appeared as if it would become a game of missed opportunities. Each team left the bases loaded, the Mustangs in the bottom of the first and Kadena in the top of the third before Sapsford broke the scoring drought.

The Panthers answered in the fourth inning when Cody Sego doubled, then with two outs, freshman Jamieson Daniel belted a double to center field, cutting the deficit in half. ASIJ left two more runners on base in their half of the fourth and it seemed Kadena had a chance.

But the Panthers would score no more. ASIJ capped the scoring when, with the bases loaded and one out, Max Fu grounded into a run-scoring fielder’s-choice groundout.

Each pitcher allowed five hits and struck out 13, Jaramillo surrendering five walks to none for Sapsford, who was named tournament Most Valuable Player for the second straight year.