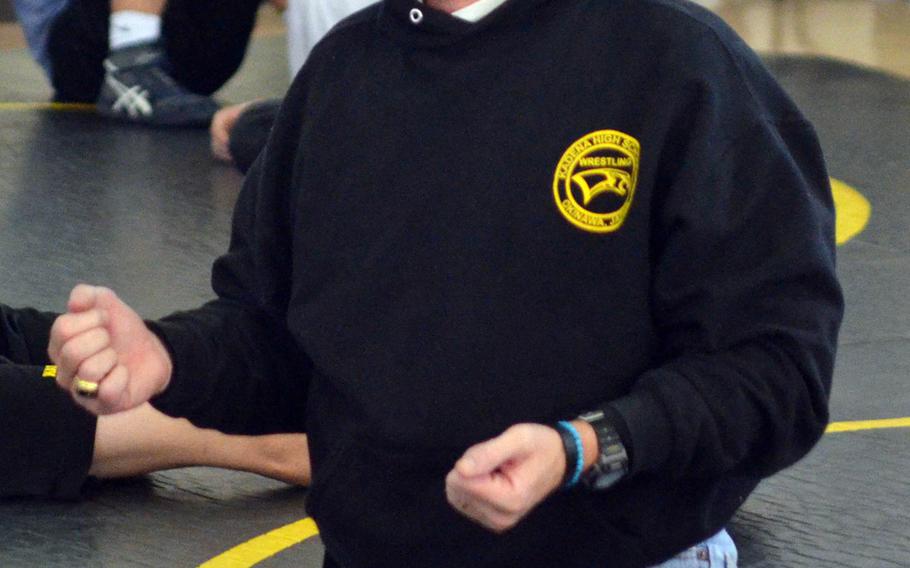 Getting senior 168-pounder Ricky Salinas from E.J. King in the transfer round in mid-December was as great an early Christmas gift for Kadena wrestling coach Steve Schrock. (Dave Ornauer/Stars and Stripes )

Getting senior 168-pounder Ricky Salinas from E.J. King in the transfer round in mid-December was as great an early Christmas gift for Kadena wrestling coach Steve Schrock. (Dave Ornauer/Stars and Stripes ) 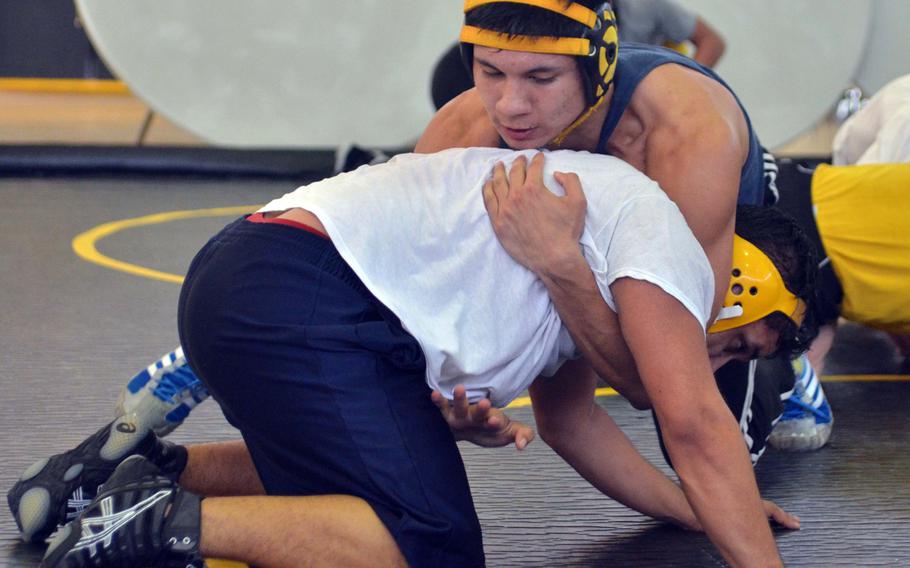 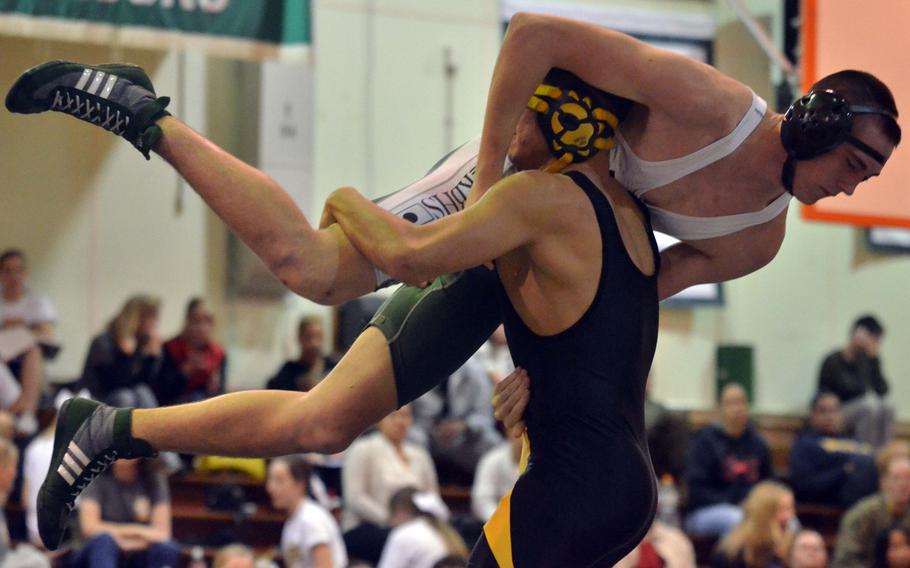 Kadena's Ricardo Salinas hoists Kubasaki's Brenden Miracle aloft in the 168-pound bout of their dual meet Jan. 14 at Kubasaki High School. Salinas won by pin in 39 seconds in his debut in Kadena Panthers uniform after transferring from E.J. King as the Christmas break hit. (Dave Ornauer/Stars and Stripes )

In the corner, Salinas’ coach, Steve Schrock, normally serious at all times, could not suppress a small smile. “His level change and penetration and just the strength to pick up his opponent into a full standing lift was kind of cool to see,” he said. “It was fun to watch.”

It was the first benefit conveyed on the Panthers by Salinas, a senior who the last two seasons was an anchor in E.J. King’s lineup. Salinas transferred in mid-December – at midseason – to Kadena and filled what Schrock said was a hole in the Panthers’ lineup at 168 pounds.

“He brings a whole new set of competitiveness … for the upper middles, the 180, 168, 158, 148,” Schrock said. “They all battle. The better practice partners you have, the better you’re going to be. We have knockdown-drag outs in practice and Ricky has just added to that.”

It helped, coach and wrestler said, that he’d already had a summer full of workouts with sailor-wrestlers, some of whom have wrestled for the Navy, and that Salinas had two DODDS Japan competitions, going 10-0, before arriving on Okinawa.

“He was prepared well,” Schrock said. “He has great technique. His maturity. He’s been a real asset and a great addition to the team. I thank E.J. King for that.”

And that’s where mixed emotions enter the picture.

Schrock could have viewed Salinas falling into his lap as an early Christmas present. But while Salinas said he was happy that he could help – and immediately – a Kadena team that’s won six Far East Division I titles, he confessed it was “heartbreaking” that he had to leave what he called his Cobras wrestling family behind.

When he stepped on the mat against Miracle at Kubasaki on Jan. 14, “it was hard to see me in the colors, instead of what I’m used to,” Salinas said. “Being here is very hard on me. It’s sometimes very heartbreaking to see that it’s a different team.”

Kadena was not a likely destination, Salinas said, when it came time for his stepfather, Navy Chief Petty Officer Royce Parfait, to transfer from Sasebo Naval Base. Virginia, it appeared, was the likely destination and Salinas said he’d spent the summer preparing against sailor-wrestlers experience in folkstyle, used in the States.

He’d even spent time recruiting for the Cobras, helping boost their lineup to record levels, when word came that Salinas would ultimately head for Okinawa.

“This is the biggest team I’ve ever been on,” said Salinas of the nearly 40 populating the Panthers’ wrestling room. “There were so many new faces. It was nerve-wracking; they’d never seen me wrestle and I’d never seen them wrestle.”

In very short order, he’s been made welcome to the Panthers, his teammates and coach said.

“Ricky helps to improve others along with himself and tries to better those around him the best way he knows how,” Panther junior 158-pounder Dominic Santanelli said. “It’s great having a guy like him on your side because of the hard work he brings for us.”

Even those who wrestle at lower weights say they’ve felt Salinas’ early influence. “He’s shown me a few good pointers and taught me different techniques to moves that he’s learned,” senior 108-pounder Tasi Duenas said. “He’s also been able to give our team feedback on some of the teams (in Japan) and how they wrestle.”

Salinas’ departure from E.J. King did leave a vacancy there, but the Cobras this season are fielding 11 wrestlers, up from four last year, the most in coaches Joe and Jennifer Cockerel’s five seasons at the helm.

“The program is going,” said Jennifer, the team’s DODDS sponsor.

Sophomore Keagon Longtin is filling the bill for Salinas a 168, but “it would be nice to have him back,” Jennifer Cockerel said, describing Salinas as natural, aggressive athlete who got a good foundation from Joe, who does the lion’s share of coaching.

“We do miss him. If he’d stayed, we’d have had a better shot” at a Division II title in next month’s Far East tournament at Osan, Jennifer Cockerel said. “If I could have kept him a few more months, I would have. We look forward to seeing him even if in different colors.”

Miracle, the wrestler Salinas vanquished in that Jan. 14 debut, has seen other 168-pounders elsewhere, including Longtin, whom he beat by technical fall before losing to Nile C. Kinnick’s Dre Paylor in the title bout in the “Beast of the Far East” tournament Jan. 10.

“Dre likes to muscle people (while) Salinas is more a technical person, he uses your weight against you,” said Miracle, a first-year wrestler. Of Salinas’ chances at Far East, Miracle said, “He can take it all the way.

But he needs to keep doing what he’s doing and stay technical.”