Softball Athlete of the Year 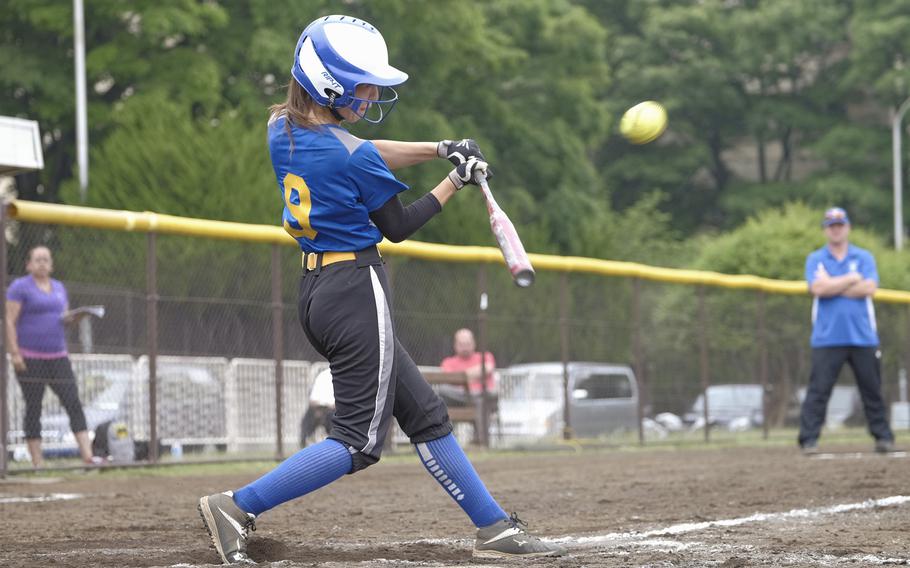 Yokota's Kaia Austin hits a triple during pool play of the Far East Tournament at Yokota Air Base, Japan on May 19, 2015. Osan defeated Daegu 8-5 to take the top seed in their bracket. Austin has been named the 2015 Stars and Stripes softball Athlete of the Year. (James Kimber/Stars and Stripes)

The diminutive shortstop’s hands make the yellow regulation-size ball look like something a PE teacher may use for a game of dodgeball.

And although she also only started playing the game two years ago, Austin has already developed into one of Pacific high school softball’s biggest offensive threats.

The sophomore shortstop who was named Far East Division II Tournament Most Valuable Player has the stat line of a league MVP: A .682 batting average, four home runs, 58 RBI, 54 runs and 36 bases on ball to just four strikeouts. She directly accounted for nearly a third of the team’s league-leading 393 runs.

Her offense helped lead the Panthers to claiming the Far East D-II and DODDS Japan District regular-season championships and sharing a Kanto Plain League title with Division I American School In Japan.

For that, she has earned the Stars and Stripes 2015 Softball Athlete of the Year award.

There’s no doubt she’s is proud of her achievements and has nothing but glowing praise for her teammates. However, Austin remains critical of her own play and sees it as a way to challenge the team to build off the most successful season in Yokota softball history.

“My brothers have been a huge influence on me. Sayer was really successful as a football and baseball player for Yokota, and Leo was a Far East MVP and All-Tournament three out of four years,” Austin said cheerfully. Nothing seems to make her happier than bragging about her family and friends’ achievements.

“They’ve both inspired me to continue to push myself to get better and set the bar very high for me. I want to be at that level.”

Maintaining this level will be a challenge.

Far East runner-up Zama expects to return almost all of their starters and most of their bench next season, including Far East Most Outstanding Player Ally Chiarenza. Yokota’s roster, on the other hand, will look very different once the Panthers hold their graduation ceremony. A new third baseman will handle the hot corner. A new center fielder will be calling plays.

“As long we can get everyone who will stay for next season to start with the right mentality from Day One rather than two months in, we’ll be alright,” Austin said. “I think as a team, we all get better when I get better. And I’ll be putting the work to be better next season.”

Her intensity and passion for the game is evident whereever she goes, whether that’s in the food court during an interview or in the bottom of the seventh inning of a championship game. No one can attest to that better than her coach, Ty Gaume.

“She’s the ultimate ‘good things come in small packages,’ ” Gaume said of her unassuming middle of the order bat. “She’s got a little Teddy Roosevelt going, she’s not large but carries a big stick. She truly is the epitome of our team slogan: ‘Stand tall, talk small and play ball.’ Even if we don’t win as many games next year, she’ll be the one who makes sure that everyone leaves everything on the field every game, and that’s all I can ask for.”