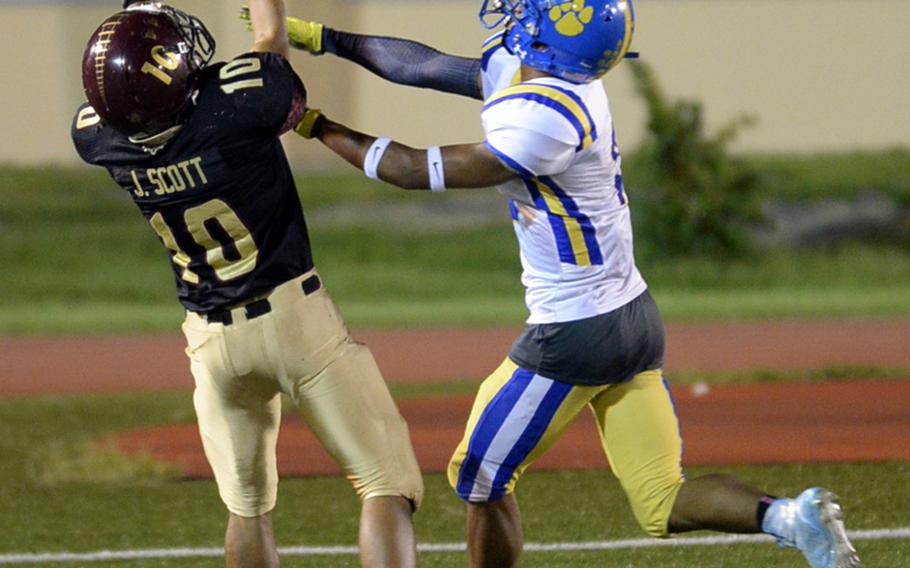 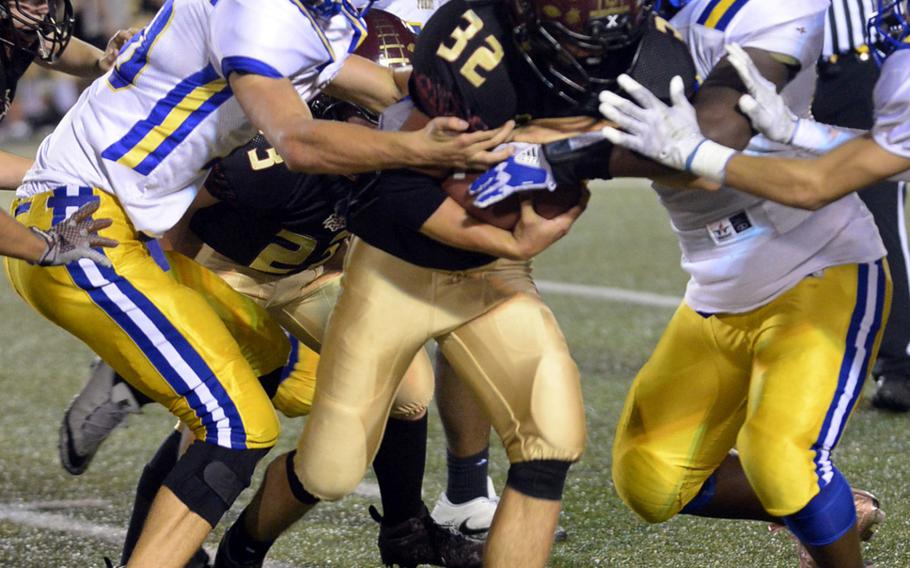 Matthew C. Perry ball carrier Andrew Borrero is wrapped up by a pack of Yokota defenders. () 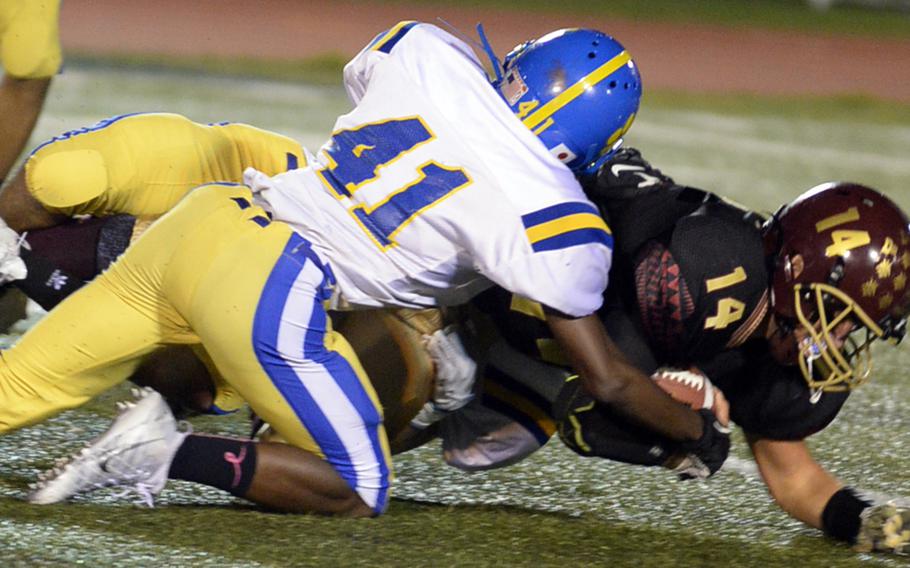 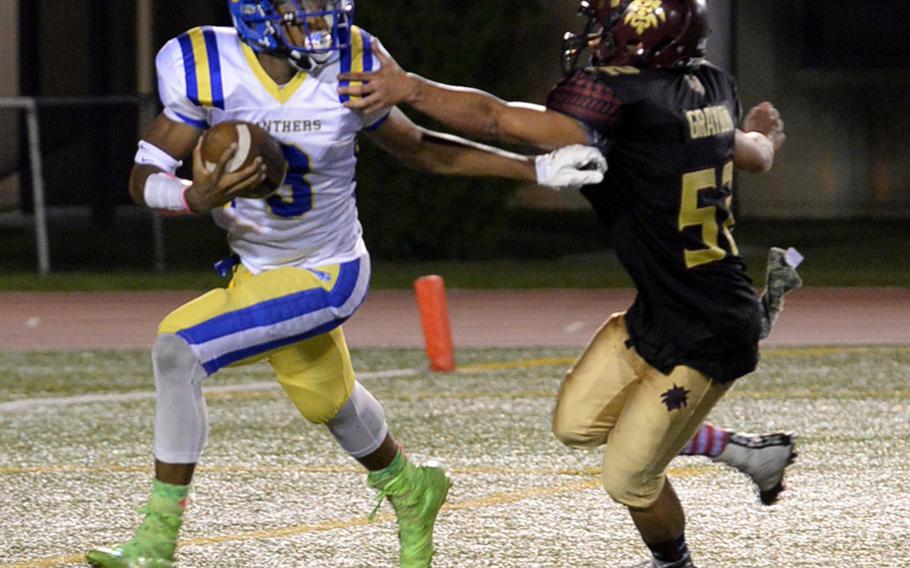 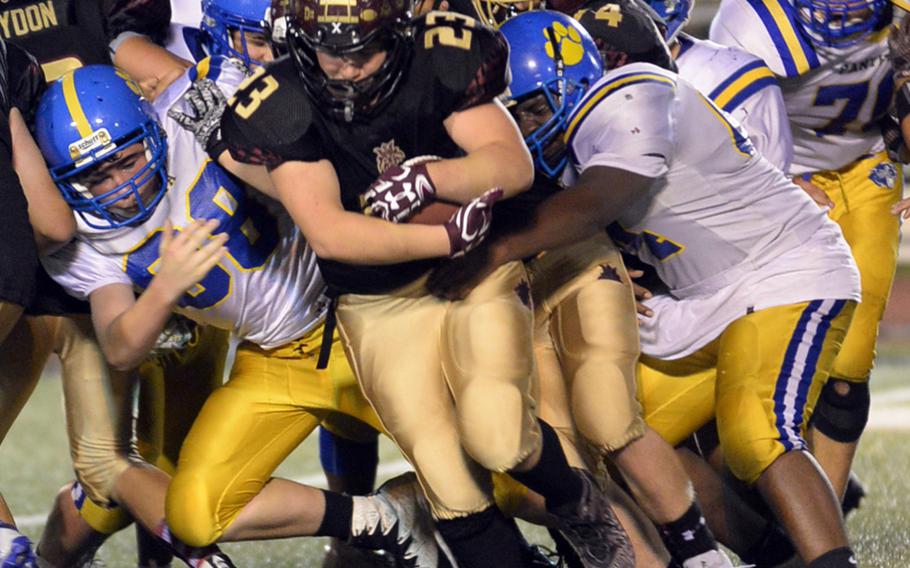 The senior returned a punt 45 yards for a touchdown with 7 minutes, 15 seconds left Friday that proved to be the game-winner, and Yokota missed a 38-yard field goal as time ran out as the defending D-II champion Samurai held on to ruin Panther homecoming 30-28.

Ernst had 148 yards on six total returns, none bigger than when he fielded a punt near the Perry sideline, cut left toward open space, then shimmied past diving Yokota coverage man Kishaun Kimble-Brooks into the end zone.

“I had to get past him and score for the team, and I just made the move,” Ernst said.

“Ridiculous,” Perry senior teammate Garrett Macias said. “I knew he was fast, but I didn’t know he was capable of that. I’m proud of him.”

The touchdown put the Samurai ahead 30-21, but the game was far from over, as Kimble-Brooks scored on a 55-yard run on Yokota’s next possession, then rushed for 33 yards on eight carries on the Panthers’ final drive that took them to the Perry 21 with three seconds left.

“I overpursued” Ernst, Kimble-Brooks said. “I should have stayed in contain, and that’s how he was able to beat me. (But) I did everything I could to bring the team back.”

Kimble-Brooks’ running set up a 38-yard field-goal try by Manny Mptias, a junior who had been nearly perfect on extra-point tries, but had never attempted a placement that long.

“My foot slipped and the kick went straight,” Mptias said, instead of hooking left between the uprights; the kick went just outside the right upright. He was trying to aim the kick more to the left, he said.

“Well played game on both sides of the ball,” Macias’ father, Frank, the Samurai’s coach, said. “This is the best game we’ve played in in a few years.”

“That’s what Friday night lights is about,” Panthers coach Tim Pujol said. “We were in position to win. They did everything they needed to do to win.”

The visiting Samurai won their third straight after losing their season opener, and improved to 2-0 in Japan Division II, a half-game ahead of Yokota (2-3, 2-1 D-II) with two D-II games left, while Yokota has one. It was the only regular-season meeting between the two teams.

Perry only needs to win one of its two remaining D-II games, at Zama next Friday and at home against Robert D. Edgren on Oct. 20, to clinch Japan’s berth in the final.

That’s scheduled for the weekend of Oct. 27-28 at the site of Korea’s D-II champion. Yokota needs to win at Zama on Oct. 20 and hope Perry loses twice.

“In games like these, you find out what kind of character you have. It’s their homecoming, there’s seconds left, a winning field-goal try; what are you going to do? And that’s what builds champions.”

Kimble-Brooks finished with 206 yards on 26 carries with three touchdowns. Jalen Harrison had Yokota’s other touchdown on a 1-yard run. Jimmy Dewberry recovered two fumbles for the Panthers.

Yokota visits Kinnick next Friday at 7 p.m., while the Samurai travel to Zama for Trojans homecoming next Friday, also at 7 p.m.