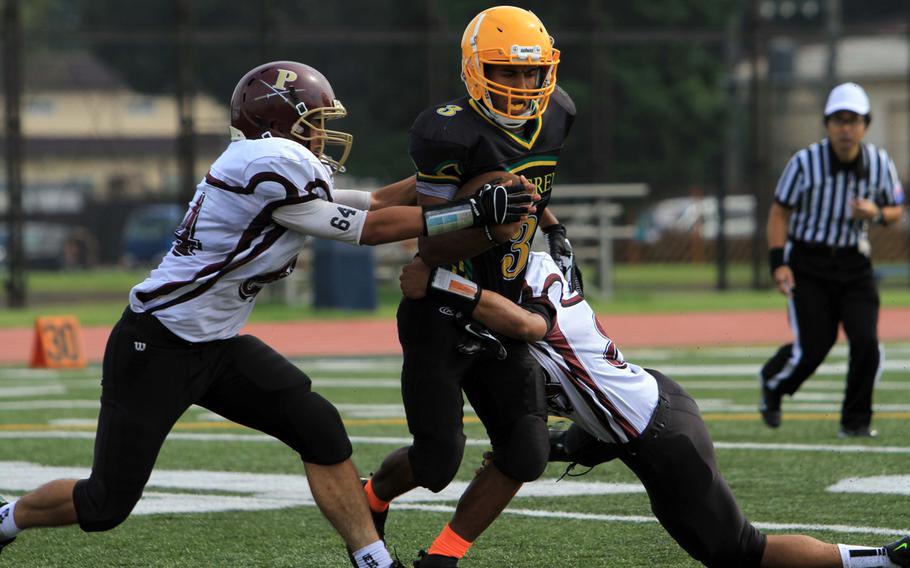 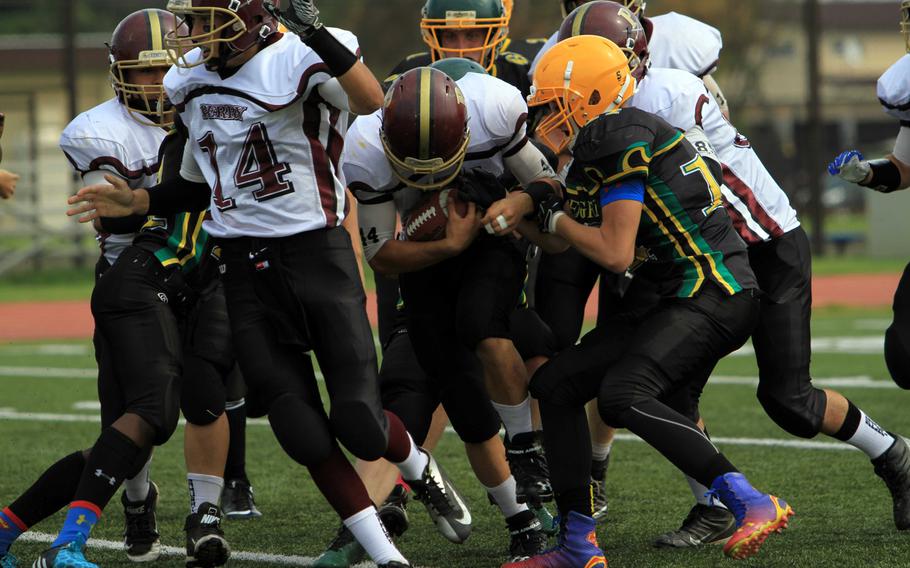 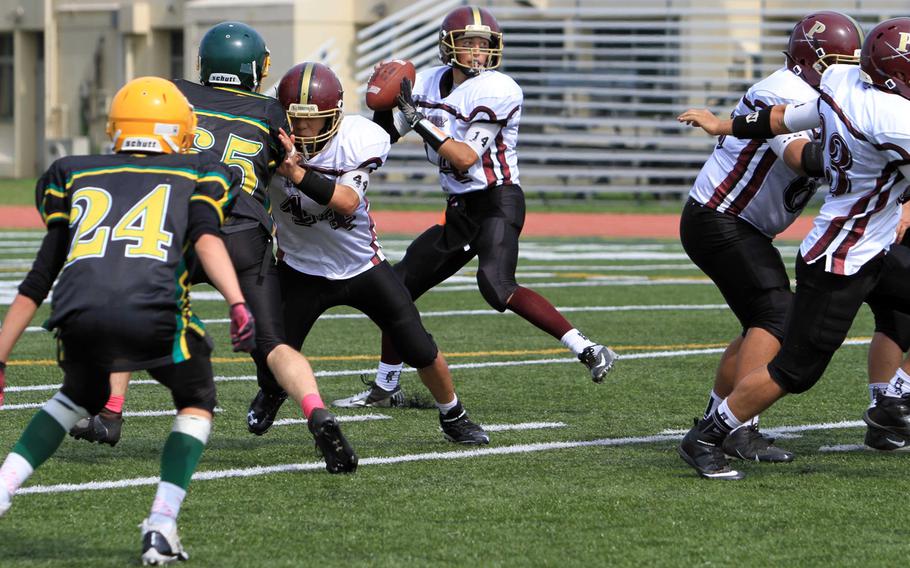 Matthew C. Perry quarterback Garrett Macias drops back for a pass Friday during a game against Robert D. Edgren at Yokota Air Base, Japan. (Nathaniel Punla/Special to Stars and Stripes) Matthew C. Perry running back Zach Brown, running between Robert D. Edgren defenders for his one touchdown Friday, finished with 148 yards on 13 carries at Yokota Air Base, Japan. (Nathaniel Punla/Special to Stars and Stripes) 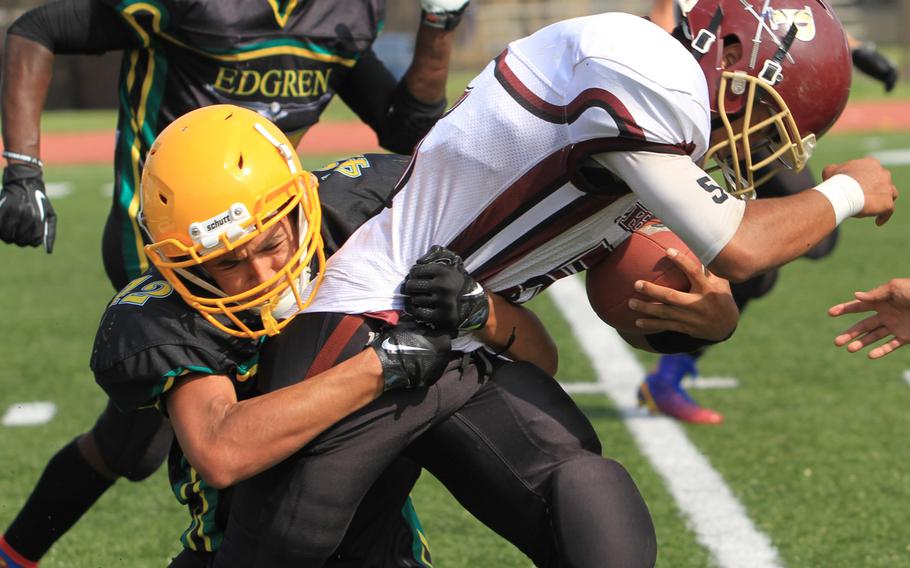 Matthew C. Perry running back Jason DeGrace gets wrapped up by Robert D. Edgren defender Roman Perez Friday during a game at Yokota Air Base, Japan. DeGrace had a rushing touchdown and 46 yards on five carries for the Samurai. (Nathaniel Punla/Special to Stars and Stripes)

YOKOTA AIR BASE, Japan – Thanks to a pair of young running backs, Matthew C. Perry will host the Far East Division II football title game in its first season as a varsity program in 11 years.

Sophomore Caeleb Ricafrente and freshman Zach Brown combined for 374 yards and four touchdowns and the Samurai held off Robert D. Edgren 33-25 on Saturday at Yokota High School’s Bonk Field, in the teams’ second neutral-site game of the season.

And Samurai coach Frank Macias said he refused to partake in celebrations that seem to be part and parcel to such feats.

“They were going to get ready to do the water-bucket splash, but I said no,” Macias said, mindful of the 33-7 loss he suffered to Bitburg while coaching Mannheim in the Europe D-II championship in 2010. “I’ve been to the big show and lost. I want to win one. I would love to get one.”

Macias and the Samurai will get that chance Nov. 8 when it hosts defending champion Daegu of South Korea, the only unbeaten team in DODDS Pacific. It will be a daytime kickoff, since the Samurai’s home field does not have lights.

“I’ve heard they are huge and fast,” Macias said of Daegu. “I guess we have to be David and hope to take down Goliath.”

Unlike the first time the teams met last month, when Perry (4-1) downed Edgren 40-18 at Camp Zama, the Eagles (2-4) made a battle of it until the Samurai pulled away in the fourth quarter. And Perry found itself in a trench battle with an Edgren team Macias said has improved.

“That’s usually our bread and butter, controlling (the trenches), but we had to fight for everything we got,” Macias said. “I’m proud of my offensive line. We kept battering and battering.”

Ricafrente rushed 28 times for 226 yards and scored three times, while Fowler added 148 yards and a touchdown on 13 carries. Jason DeGrace had Perry’s other TD and finished with 46 yards on five carries. Perry recorded six sacks and three interceptions, two by Garrett Macias.

“That was a big, big defense,” Schofield said.

The Eagles changed around their lineup, with speedy Daniel Lovett out with an injured leg. Sky Phillips took some snaps under center along with Shawn Robinson.

Phillips returned a fumble 50 yards for a touchdown, while Robinson ran 8 yards for a score, caught a 45-yard touchdown pass from Phillips and threw 30 yards for TD to Joseph Ngorje.

Perry entertains Zama for homecoming on Oct. 25. Edgren closes its season at home Oct. 24 against Yokota.