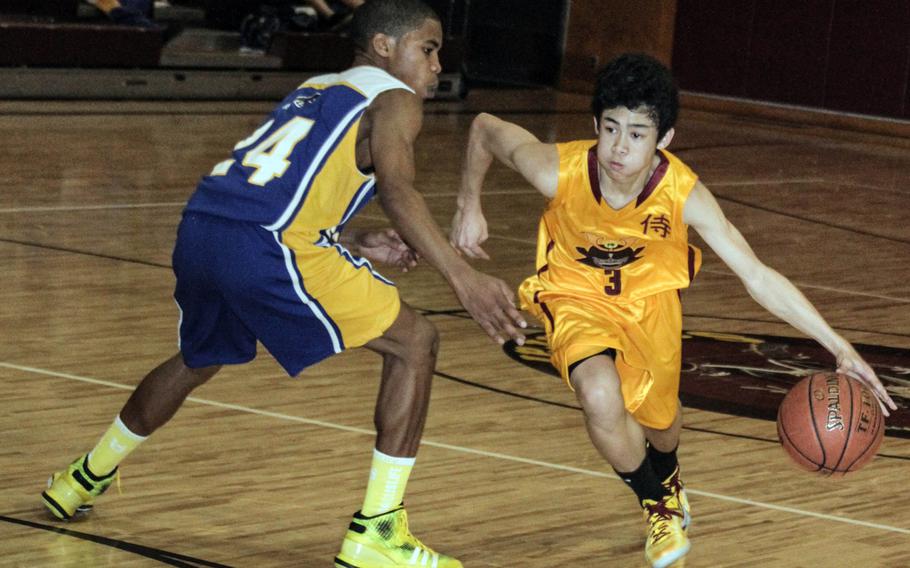 Jadan Anderson of Yokota and Vincent Ermitano of Matthew C. Perry, shown playing in a Jan. 10, 2014 DODDS Japan regular-season game, will face off Friday at Yokota's Capps Gym for the first time as Division II opponents. (Gaku Lange/Special to Stars and Stripes)

Matthew C. Perry’s boys basketball matchup Friday at Yokota could be a preview of bigger things to come on the DODDS Japan and Far East Division II Tournament landscapes.

Yokota’s move from Division I to Division II makes the Panthers the small-school equal of the Samurai for the first time. And with Perry at 14-1 and Yokota 12-0, some observers are marking Friday’s contest a potential DODDS Japan and/or D-II title-game pre-screening.

“We’re looking forward to it,” said coach Paul Ettl of Yokota. “It should be a good test for us heading into the home stretch.”

“It should be a very good measuring stick for two top teams at the Division II level,” Samurai coach DeWayne Pigge’ said. “We’ve been working hard to get where we are. This will be a good gauge to see where we stand.”

Friday’s showdown is among a handful of highlights of the last significant regular-season weekend of basketball games and wrestling meets before district and league tournaments commence next weekend.

There’s every chance the Panthers and Samurai could meet multiple times next month in the DODDS Japan tournament and Far East D-II Tournament.

Though mindful of their status as contenders for both titles, both Ettl and Pigge’ said they’re entering Friday’s game as they do all others.

“We plan to worry about what we do” rather than about the Samurai, Ettl said. “We don’t know much about them. We haven’t seen them. We plan to come with what we have and hopefully, that will be enough.”

“We’re coming in with a mindset of being focused and stay with the game plan we’ve had since the beginning,” Pigge’ said.

Other weekend matchups have E.J. King’s boys and girls teams traveling to Korea to play Seoul American, the girls for the first time in the schools’ respective histories and the boys for the first time since the Cobras hosted the long defunct Turkey Shootout.

Kubasaki visits Kadena’s boys, with their season series level at 2-2, and fresh off the teams’ most recent outcome, a 63-61 last-second triumph by the Panthers in the Okinawa-American Friendship Tournament.

Daegu’s boys and girls teams conclude their Korea regular season with visits to Osan and Humphreys.

A day after their matchup with the Panthers, Perry plays a school-first regular-season neutral-site game with Robert D. Edgren, also at Yokota. The night before, the Eagles’ boys and girls teams pay a call on Nile C. Kinnick.