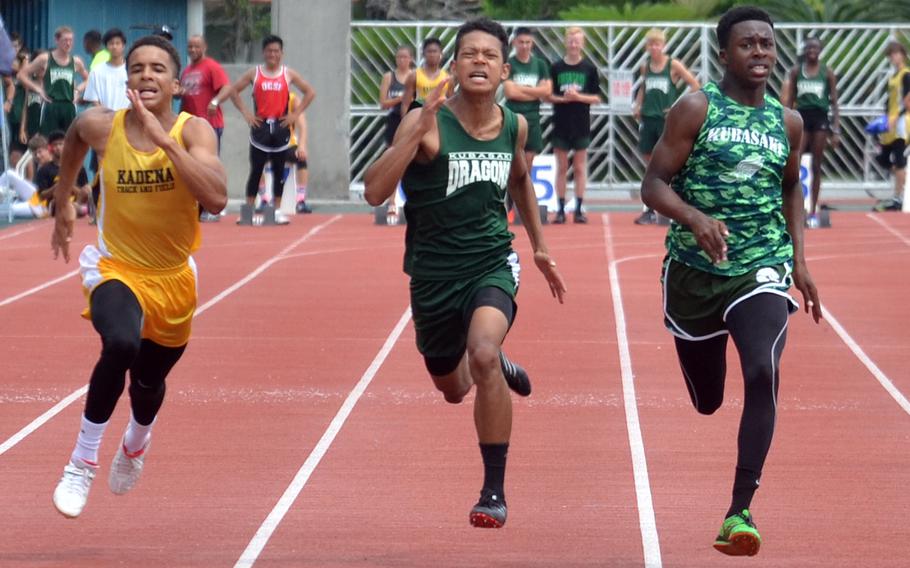 Kadena's Adrian Robinson and Kubasaki's Takao Elliot and Mahlik Francis run side-by-side toward the finish of the boys 100. Francis won in 11.55 seconds, followed by Elliot (11.61) and Robinson (11.70). (Dave Ornauer/Stars and Stripes )

Kadena's Adrian Robinson and Kubasaki's Takao Elliot and Mahlik Francis run side-by-side toward the finish of the boys 100. Francis won in 11.55 seconds, followed by Elliot (11.61) and Robinson (11.70). (Dave Ornauer/Stars and Stripes ) 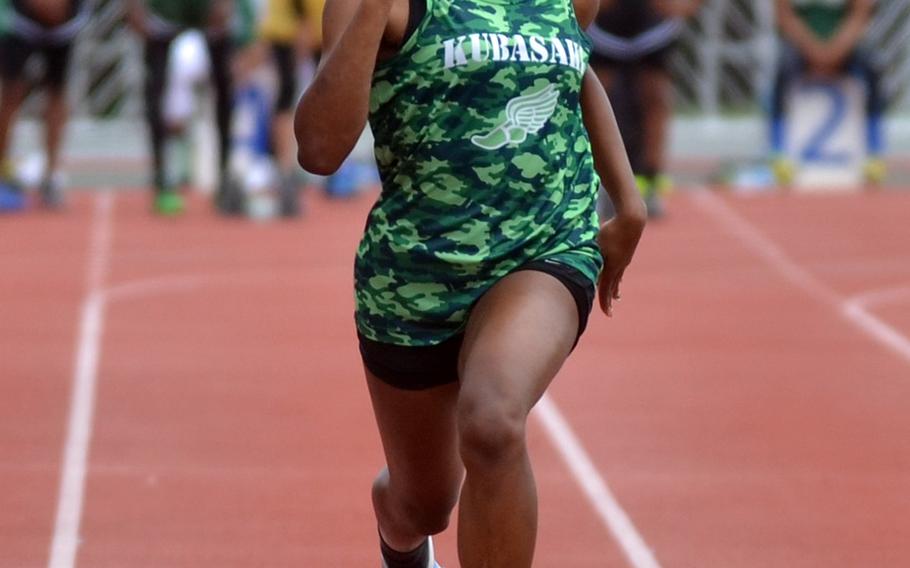 Kubasaki senior Kaelyn Francis broke the district record in the 100 and anchored the Dragons' 400 relay team to another league mark. (Dave Ornauer/Stars and Stripes ) 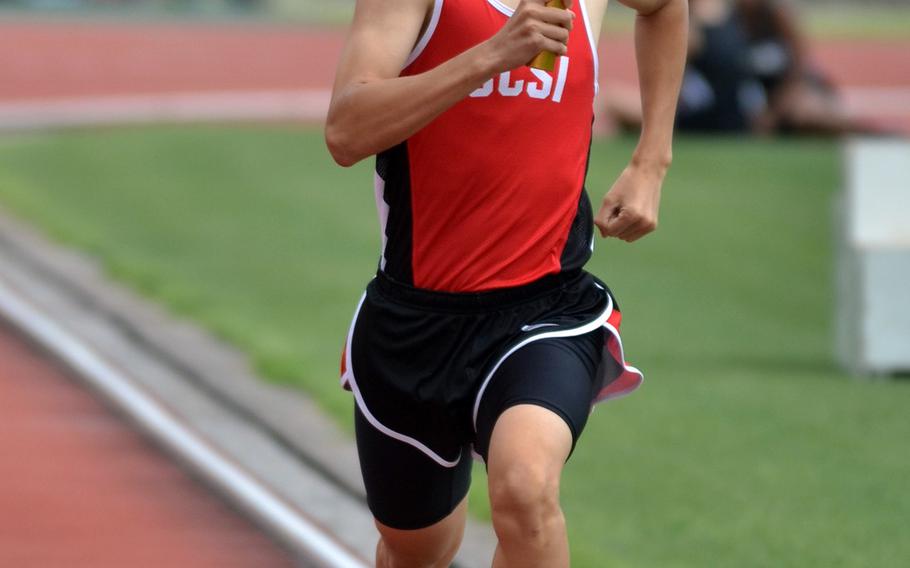 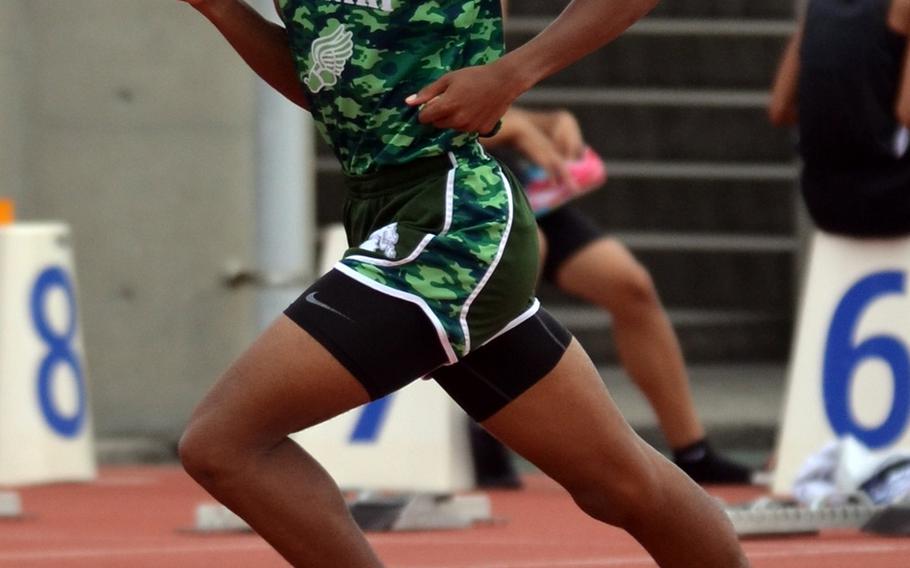 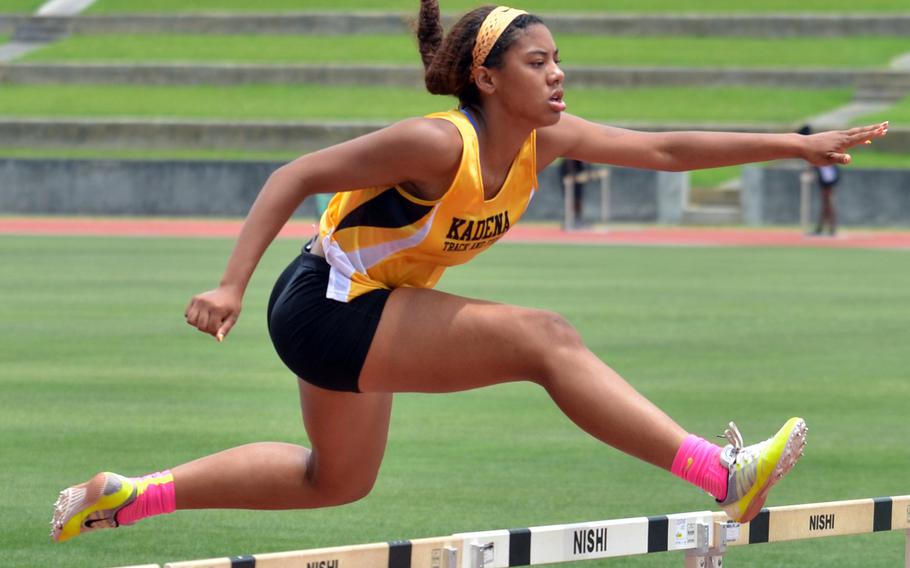 Kadena senior Tiarrah Edwards heads toward the finish of the 300 hurdles. She won that event and the shot put and broke the district record in the 100 hurdles. (Dave Ornauer/Stars and Stripes )

The Kubasaki senior broke the three-year-old Okinawa record in the 3,200 - one of six league marks to fall during Saturday’s season-ending meet at Okinawa City Stadium.

Other district records broken Saturday were the girls 100, 100 hurdles and 400 relay, while Okinawa Christian’s boys topped the league marks in the 1,600 and 3,200 relays.

The record performances debunked the notion, some coaches said, that Okinawa athletes would not give it their all with the Far East meet qualifying deadline having passed two weeks earlier.

Johnson’s result put him within 12.37 seconds of the Pacific’s season best, 9:38.13, the Kanto Plain record set on March 26 by Yokota’s Daniel Galvin.

Johnson said he was aware of Galvin’s mark and knows he also will face American School In Japan’s Evan Yukevich, among others.

“It will take all I’ve got, but I’m willing to give it,” Johnson said.

Johnson was joined among Kubasaki district record breakers by fellow senior Kaelyn Francis. She clocked the 100 in 12.61 seconds, beating the old mark of 12.66 set in 2013 by then-Kadena sprinter Janika Caines; she is now a Kubasaki assistant coach.

To beat the old district record or to beat a mark that Caines set? “Kind of both,” Francis said.

“I wasn’t expecting it,” Edwards said, adding that she’d felt tired and that the sultry weather affected her entering the race. “I was feeling really good during the race and the wind helped.” Edwards also won the shot put and 300 hurdles.

Air quality is a chronic problem during spring in the northwest part of the republic due to excess PM 2.5 dust emanating from China and Gobi Desert “yellow dust” from Mongolia.