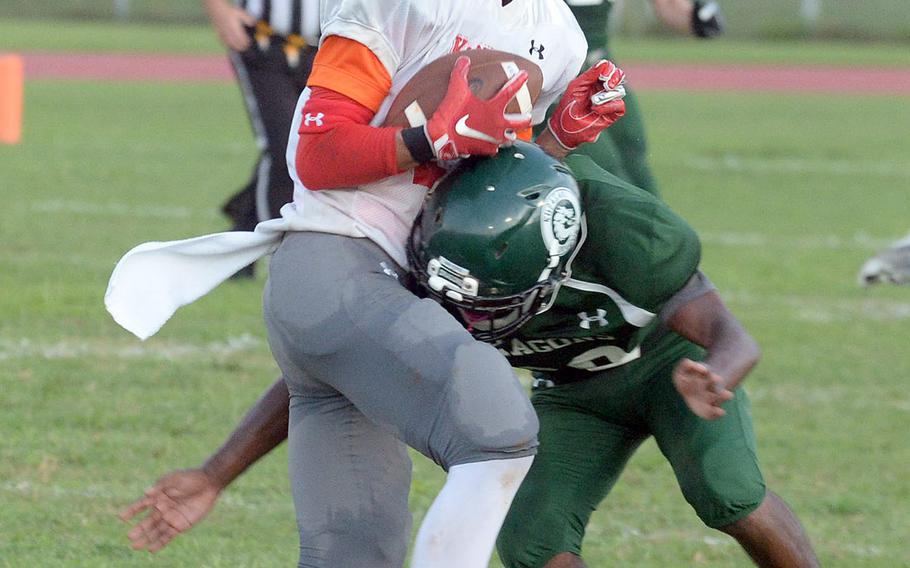 Nile C. Kinnick's Daniel Burke gets knocked out of bounds after an interception by Kubasaki's Jamahl Evans as Red Devils teammate Kaleb Leon Guerrero looks to help out. (Dave Ornauer/Stars and Stripes) 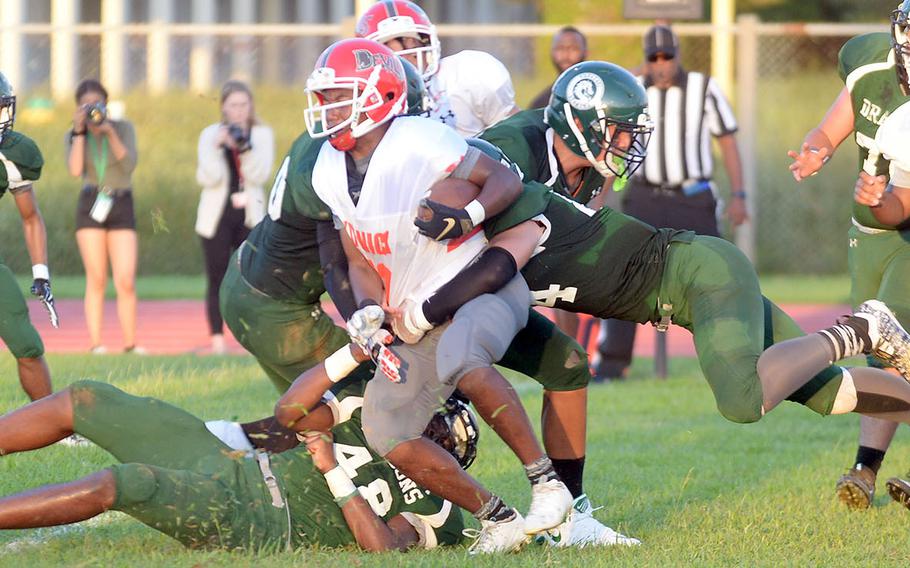 Sophomore Jayden Jones and junior Gabriel Stravers combined for 136 yards and a rushing touchdown. Meanwhile, quarterback Patrick Kelly tossed two scoring passes as the Red Devils scored thrice in the second quarter, then left it up to their defense to hold off Kubasaki 21-8 on Friday at Mike Petty Stadium.

“They’re two very good running backs,” coach Dan Joley said of Jones and Stravers, adding that the best may be yet to come from each of them. “They’re very young and the sky’s the limit for each of them, absolutely.”

Jones ran 15 times for 59 yards and Stravers added 77 yards on nine carries, including a 15-yard scoring run on a late second-quarter draw play to make it 21-0 just 12.4 seconds before halftime. Stravers also had the game’s lone quarterback sack.

Kelly went 9-for-24 for 111 yards, including TD passes of 7 yards to Ryo Nishiyama and 20 yards to Jahmari Jackson earlier in the period. Daniel Burke converted an extra-point kick, caught a two-point pass and had the game’s lone interception on Kubasaki’s first possession.

“Daniel played great,” Joley said, “and Patrick spread the wealth. Kubasaki did a nice job of pressuring him, and Patrick responded well.”

It was far from a perfect performance by the reigning champion Red Devils. They fumbled the ball away twice and were penalized 14 times for 115 yards; Kubasaki was also flagged 14 times, for 99 yards.

“It was our first live football game,” Joley said. “It comes with the territory in Game 1, there are going to be mistakes.”

One bright spot for the Dragons came in the fourth quarter, when they drove from their 1-yard line 99 yards on 16 plays in 7:53. It was capped by Haydn Peterson’s 3-yard touchdown run and quarterback Lucas Kappen’s two-point conversion – the Dragons’ first points of the season in two games.

Jaylan Mayers kept the drive alive by covering a punt that was mishandled by Kinnick return man Burke at the Red Devils’ 23-yard line.

“They still have ways to sting you,” Dragons coach Fred Bales said of Kinnick. “They did a great job. They have a great quarterback. We have a good bunch of kids who are working hard and trying to get something going on offense. And we did, in the second half, and scored some points.”

Next for Kinnick is a rematch of the last two D-I finals, when the Red Devils host Kadena at 5 p.m. next Saturday. The last three times the teams have met were at Berkey Field.