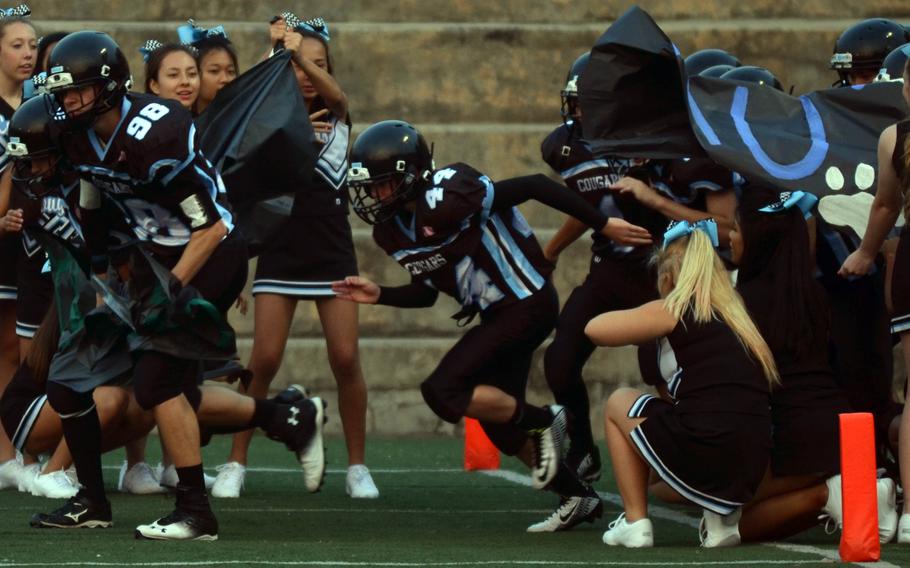 Osan players break through a giant paper sign held by the cheerleaders before the start of Friday's game with Daegu. The Warriors led 24-0 when the game was suspended by lightning. No potential completion date was announced. (Dave Ornauer/Stars and Stripes)

Osan players break through a giant paper sign held by the cheerleaders before the start of Friday's game with Daegu. The Warriors led 24-0 when the game was suspended by lightning. No potential completion date was announced. (Dave Ornauer/Stars and Stripes) 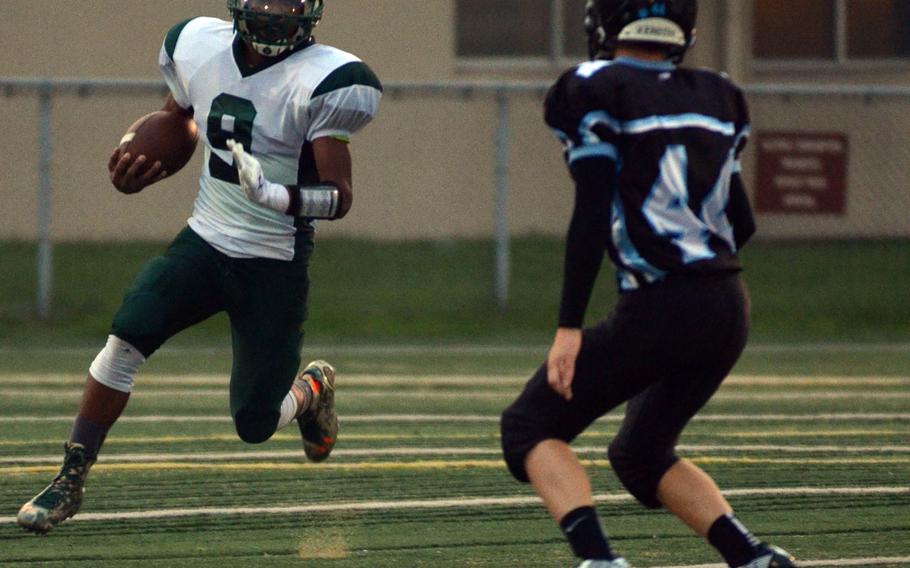 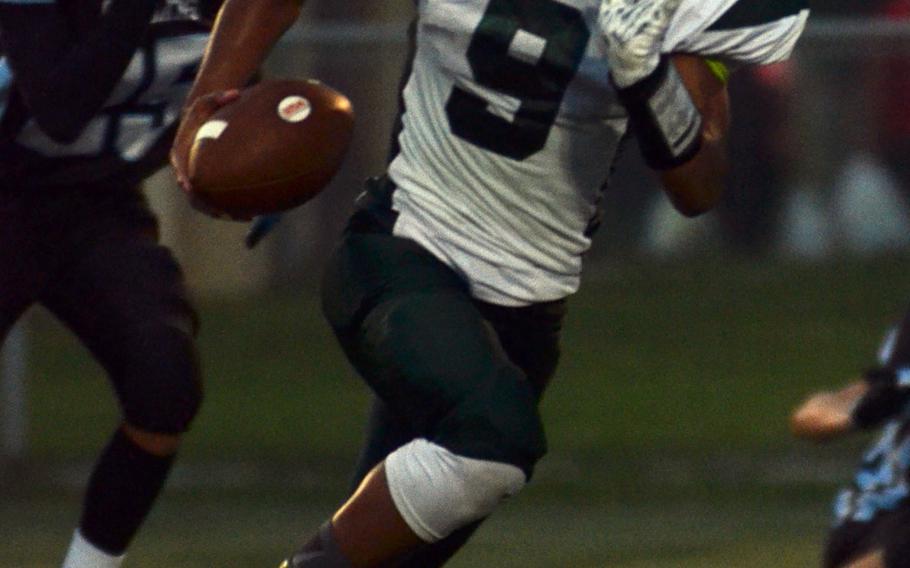 Daegu's DeAndre Rosalie completes a 32-yard run to the end zone for the Warriors' first touchdown. (Riley Daniels/Special to Stars and Stripes) 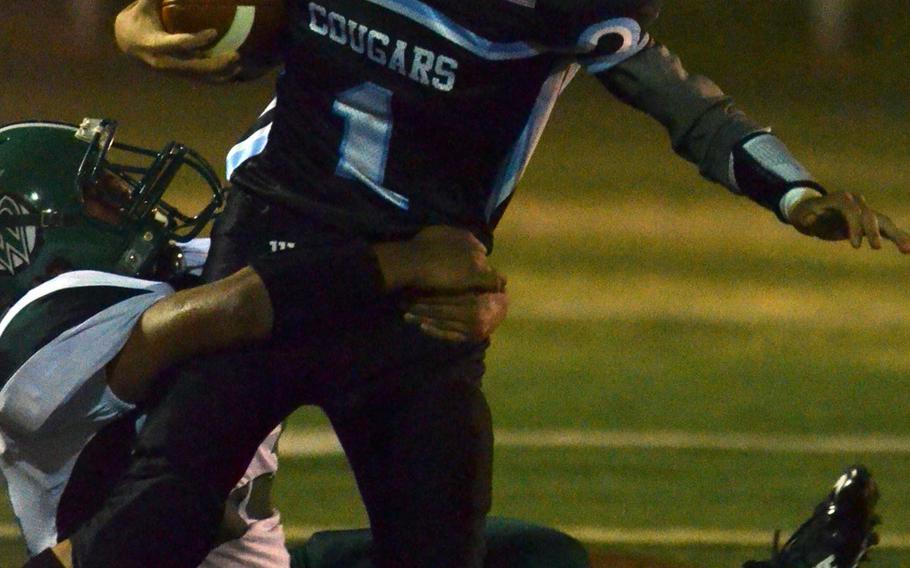 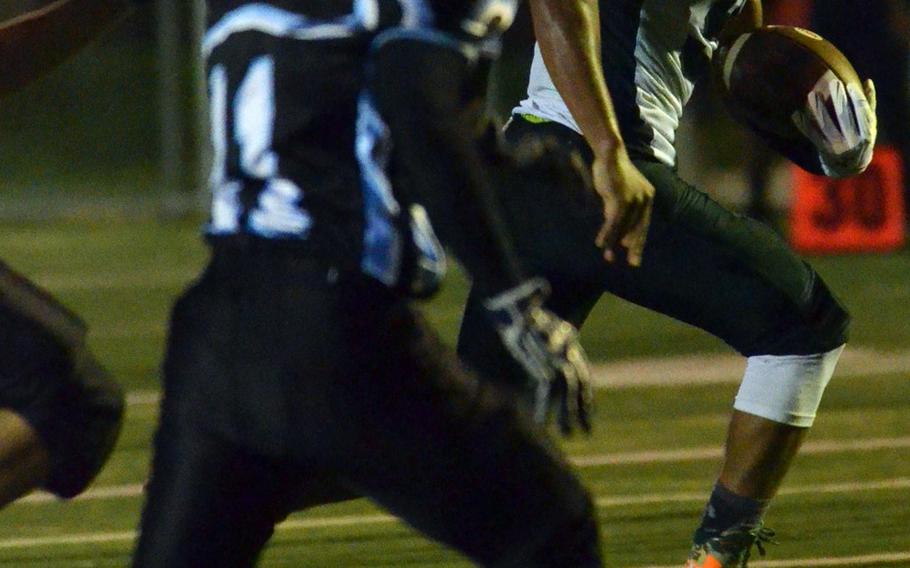 Daegu's DeAndre Rosalie, shown outrunning Osan's Sam Kim, had 127 all-purpose yards and three touchdowns on both sides of the ball. (Riley Daniels/Special to Stars and Stripes) 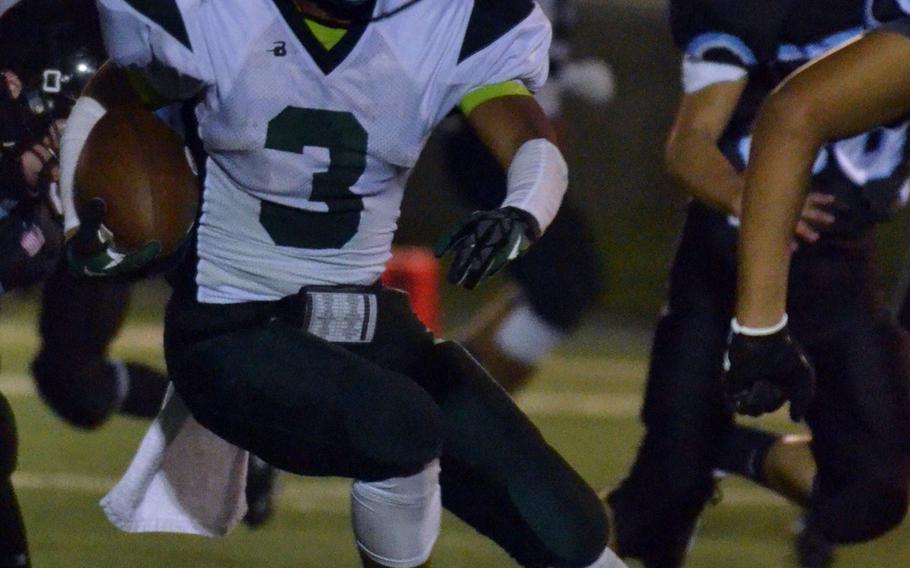 Daegu's Josh McCaw looks for running room during a game against Osan. (Riley Daniels/Special to Stars and Stripes) 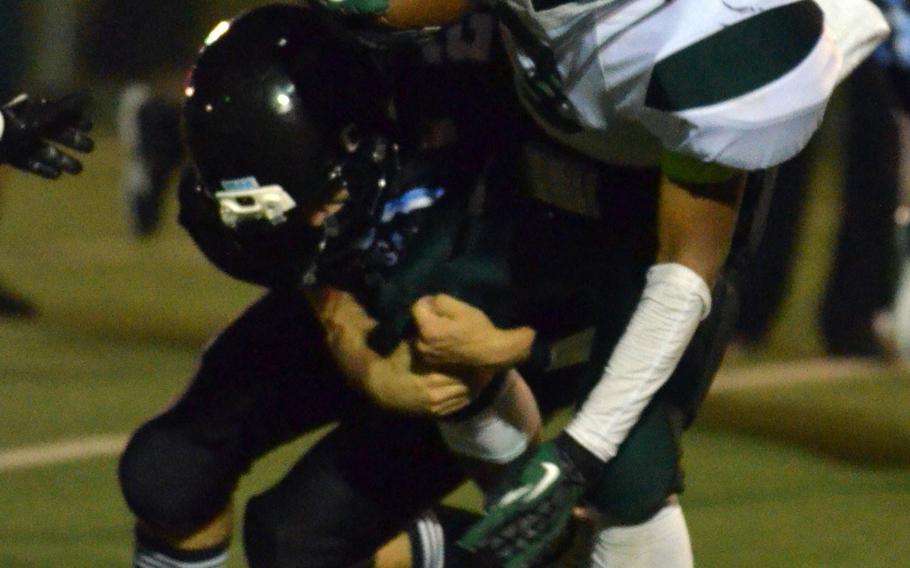 A little used backup to Caleb Page a year ago and injured to begin the season before that, Rosalie scored three times as the Warriors held a 24-0 lead at Osan before the game was suspended by lightning. Daegu was later granted the victory Tuesday by DODDS Pacific.

Page transferred to the States after the school year ended, leaving the inexperienced Rosalie at the top of the depth chart.

“He’s a leader and he knows the plays inside and out. He’s been doing a great job,” Walter said, adding that much of Rosalie’s learning came as Page’s understudy, and also while he was sidelined early in the 2013 season by injury.

On the first play of Daegu’s second possession, Rosalie offered an indication, keeping the ball to the left side, then cutting to the right and outracing the Cougars’ defense to the end zone.

One possession later, after DeMarco Andrews had a 55-yard punt-return TD called back on a penalty, Josh McCaw punched it in from the Osan 1-yard line, helped along by a 41-yard Andrews rush. Rosalie didn’t wait long to make it 18-0, picking off Wesley Hardin and returning it 52 yards for a score.

Andrews, McCaw and Rosalie are three of five Warriors who can “take it to the house,” meaning players with breakaway speed. Others are Jarvis Stokes and John Michael Medallo, the latter who had one of two Daegu sacks in the game.

The Warriors were far from perfect, Walter said.

“It was a sloppy game,” he said, adding that having much fewer returnees than he had last year and only three weeks of practice instead of four didn’t help. “It takes awhile. Last year, I had all returners and we could line up plays the first day. Now, I have four returners and a whole bunch of new kids and one week less” to prepare.

For Osan’s part, first-year coach Don Tusha felt his team, despite being held to 28 yards of offense and one first down, had a chance to make the game competitive. “We felt like we had a chance to come back in the fourth quarter,” Tusha said.

He would like to see completed the last 16:02 of the game suspended when lightning appeared in the skies to the north. “It’d be nice,” he said, adding they could finish the suspended game and then play Daegu in their next regularly-scheduled game. “I wouldn’t mind playing five quarters.”

The teams are scheduled to meet next at Daegu on Sept. 26, then back at Osan on Oct. 10.

The Cougars next visit Humphreys on Sept. 5, while Daegu visits Humphreys a week later.