New-look Eagles are soaring so far this season 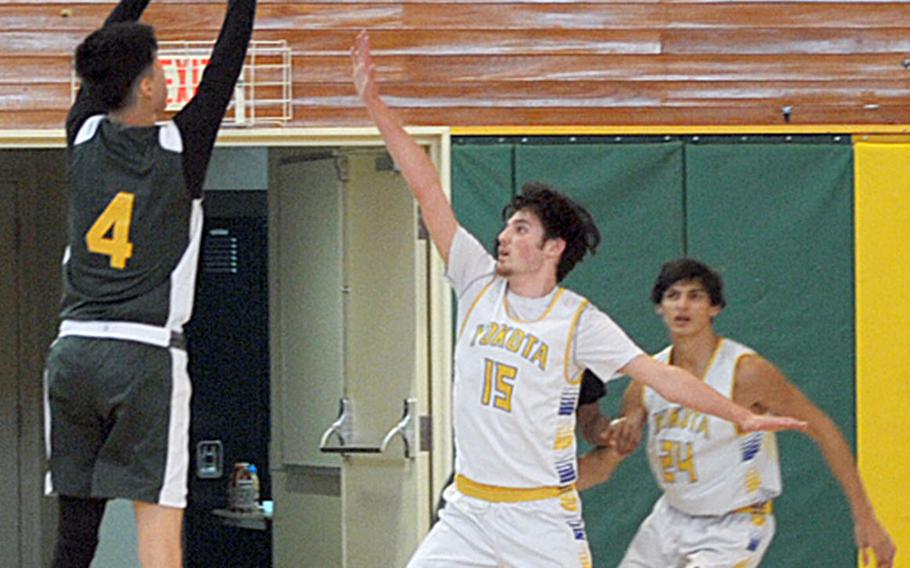 After a 2-22 season a year ago, Robert D. Edgren’s boys basketball team finds itself at 5-0, including a DODEA-Japan best 4-0 thus far.

Those games have a common bond – the Eagles are unbeaten at home. This weekend, Edgren, takes its act on the road with a pair of weekend games at Zama to see how well they do away from the Eagles’ Nest.

The secret to Edgren’s success?

“The PCS Plane was nice to us,” said Andre Thibert, back in the coaching saddle for his ninth season after a five-year layoff and finding himself “relaxed and enjoying the ride.”

Keys to the Eagles’ fortunes have been four senior transfers: Quan Thompson (Idaho), Amos Alsvig (Germany), Chauncey Williams (Alabama) and Riley Palfy, who used to be at Yokota but found himself at Misawa Air Base after transferring from Texas over the summer.

Though the transfers are new to the Eagles, they have worked together in practice and played together in games as if they’d known each other for years, Thibert said.

“They’re all clicking. Everything is working,” Thibert said, adding that even long before the season began, “they were the new kids at school, but it just worked out that way (that) they were staying together” on the court, in the classroom and outside of school.

The lone returner is Jun Royster, a senior guard. He and Palfy went to school together at Yokota. “That’s working out well, too; they already had a connection,” Thibert said.

And as well as they’re doing on the court, the team as a whole is also pulling its weight in the classroom, Thibert said. “We have a lot of smart guys; overall GPA including JV and varsity, 25 guys, is over 3.1,” he said.

“So we’re taking care of business not just on the court, but in the classroom, which was a goal for us this year.”

In what shapes up as a weekend between polar-opposite teams, Edgren’s boys take on a Zama team that’s 1-6.

On the girls side, the Trojans are unbeaten at 6-0, including a 5-0 DODEA-Japan mark, and in their case it’s a youngster leading the way in the scoring department – freshman Chloe Sterling, averaging 21.8 points per game.

Elsewhere, Kadena’s girls and boys have a chance to wrap up Okinawa titles when they host Kubasaki at 5 and 7 p.m. Friday.

Humphreys’ undefeated boys and the girls with one loss make a swing through Seoul, playing at Seoul Foreign on Friday and Seoul American on Saturday. Daegu’s unbeaten girls team hosts Yongsan on Friday.