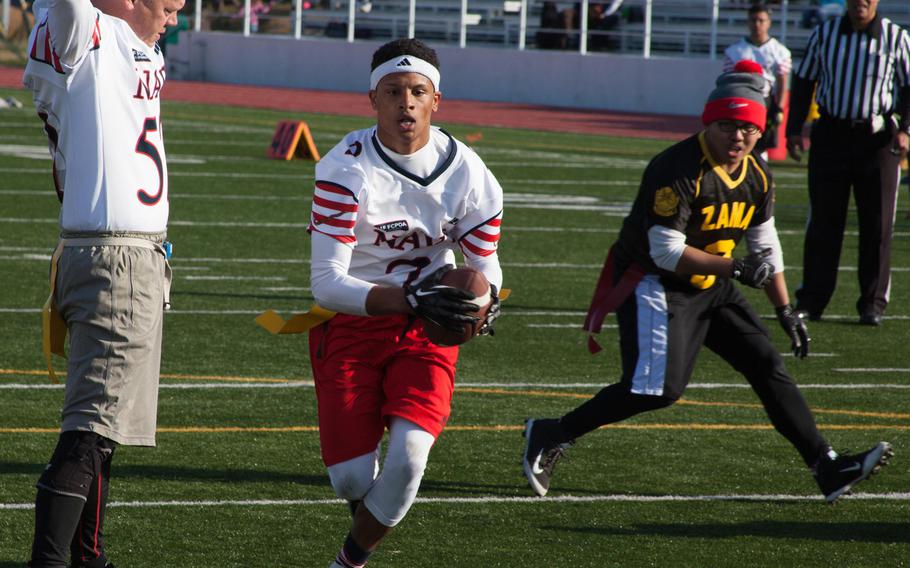 Dennis Dzurikanin carries the ball into the end zone to score an extra point for Navy. (Barry Riley/U.S. Navy)

Dennis Dzurikanin carries the ball into the end zone to score an extra point for Navy. (Barry Riley/U.S. Navy) 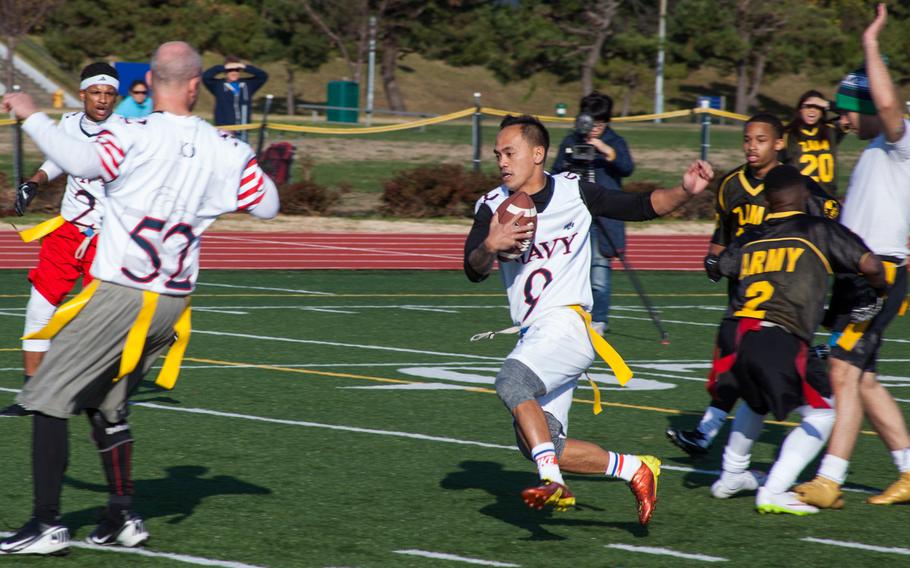 Winnie Arios carries the ball down the field for the winning touchdown for Navy. (Barry Riley/U.S. Navy) 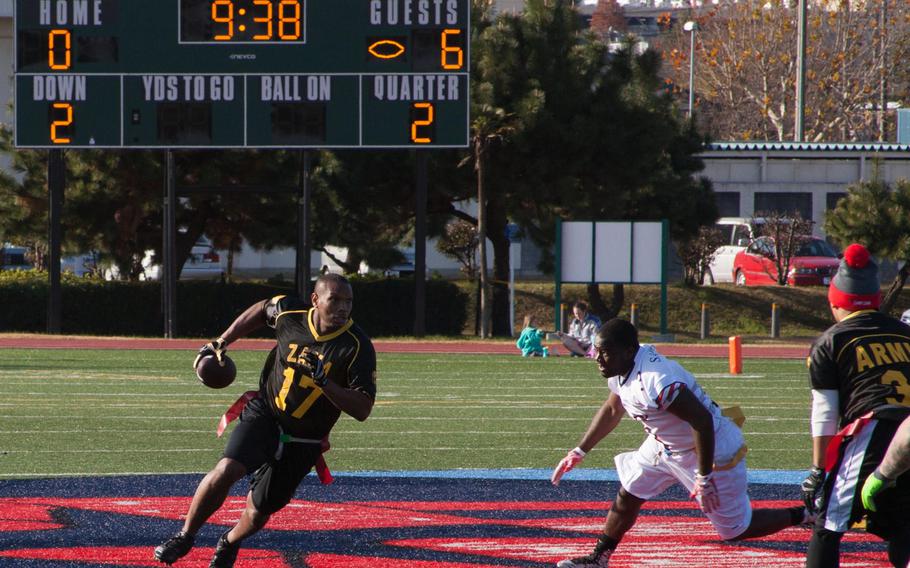 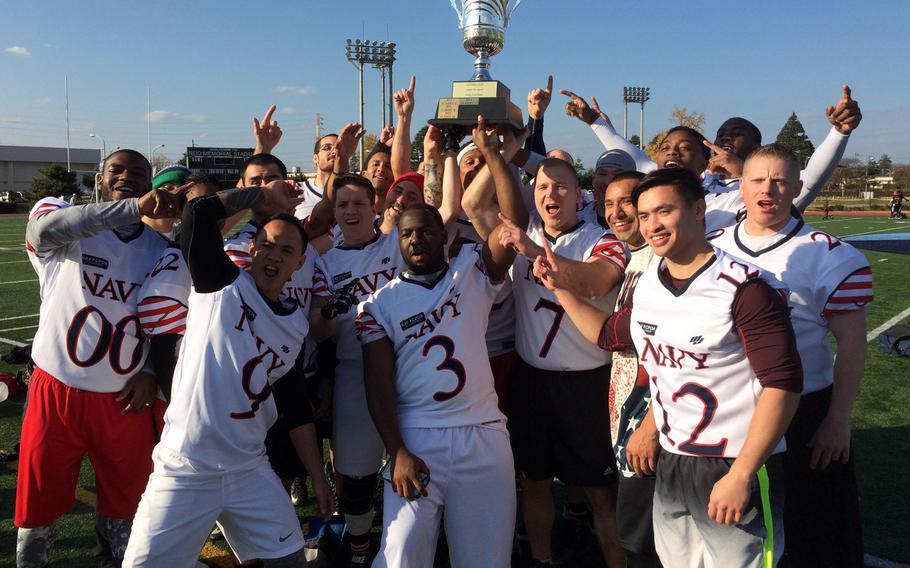 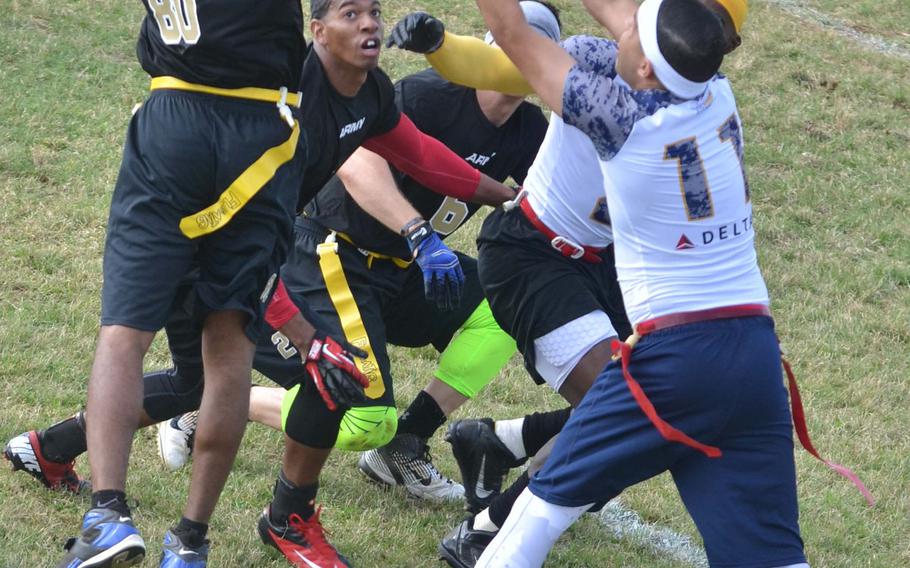 Army's Rodney Simmons goes up against a sea of soldiers and sailors to snag an interception during a flag-football game Saturday at Torii Station, Okinawa. (Dave Ornauer/Stars and Stripes) Navy's Gregg Nieten gets sandwiched going up for the football between Army's Josh Mitchell and Bradley Burke during a flag-football game Saturday at Torii Station, Okinawa. (Dave Ornauer/Stars and Stripes) 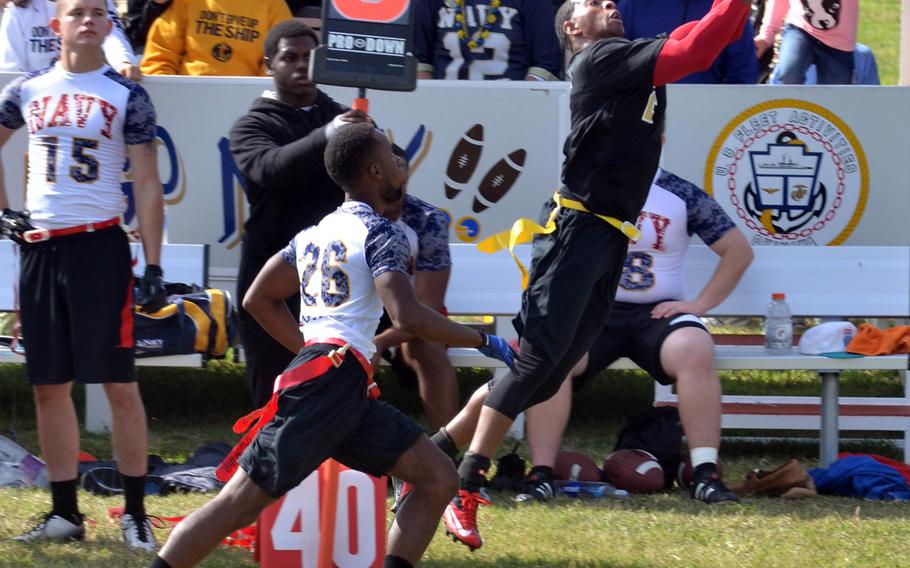 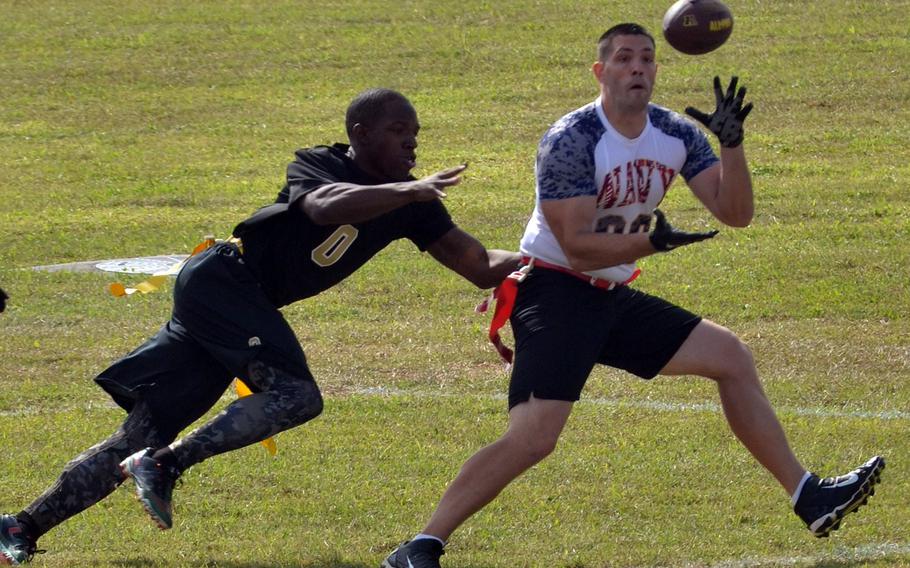 TORII STATION, Okinawa – Though Army holds the overall series lead, Navy is starting to catch up.

Tyler Terronez threw four touchdown passes, one each to four different receivers, and Okinawa sailors won the annual Army-Navy rivalry game for the second straight year, leading from start to finish 29-6 on Saturday at Torii Field.

“We’ve got the players this year, a solid defense, we’ve been putting in work,” said coach Mark Maier, adding that Navy has been practicing for the game since September. “Can’t lose if we don’t give up points.”

Terronez, 25, a Navy lieutenant from Stillwater, Okla., on deployment from the States, is a 2011 Naval Academy graduate who played sprint football, or 9-on-9 ball resembling flag football.

“We have a great offense and an even better defense,” Terronez said. It was Navy’s fourth win in five games and fifth in the last seven, and sliced Army’s lead in the series to 18-8. The services also play flag games at Yongsan Garrison in South Korea and at Camp Zama and Naval Air Facility Atsugi in Japan; Army leads the series overall 41-17.

While the game marked the renewal of the oldest of the Pacific’s flag-football rivalry games, players, coaches and command staff overseeing the game said at the end of the day, they remain partners in peace off the field.

“First and foremost, we’re here to have fun,” Arios said. We’ve got a great group of guys and Army’s team always looks pretty strong. It’s always good to have that healthy, friendly competition between us.”

All three games this year were played in sunny conditions and featured accoutrements such as band and cheerleader performance both pregame and at halftime, and punt, pass and kick competitions for prizes as high as $10,000.

Terronez, the Okinawa game’s Most Valuable Player, threw touchdown passes to Gregg Nieten – last year’s MVP – and Nathan Henning and Rodney Watkins to make it 21-0 at halftime. Anton McDuffie cut the lead to 21-6 with a touchdown catch for Army, but Joshua Alvarez put it away with a catch and run of 49 yards late in the second half.

Derek Wolske put Army ahead late in the first half. Navy rallied for touchdowns by Dennis Dzurikanian early in the second half, then Winnie Arios with less than a minute left on the clock.

With the win at Atsugi, Navy leveled their Japan series with Army at seven apiece.