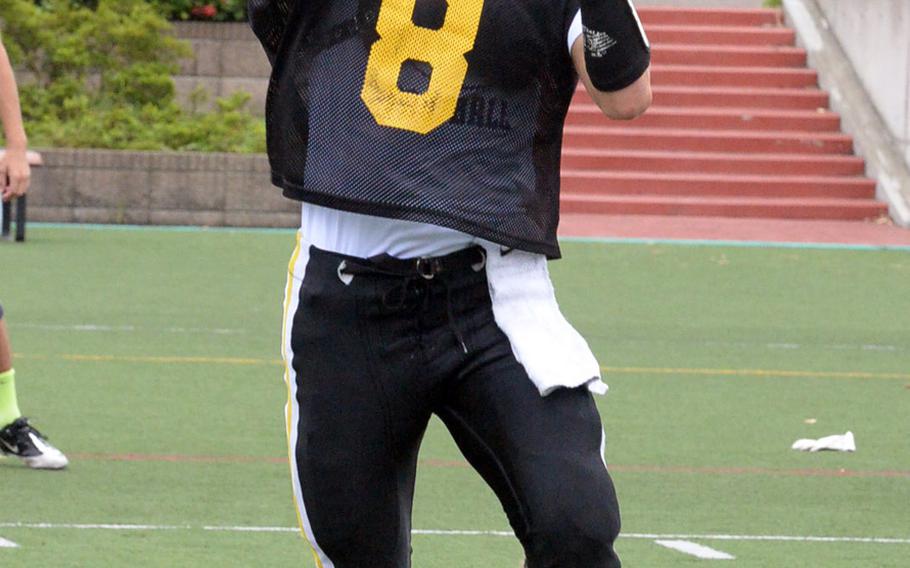 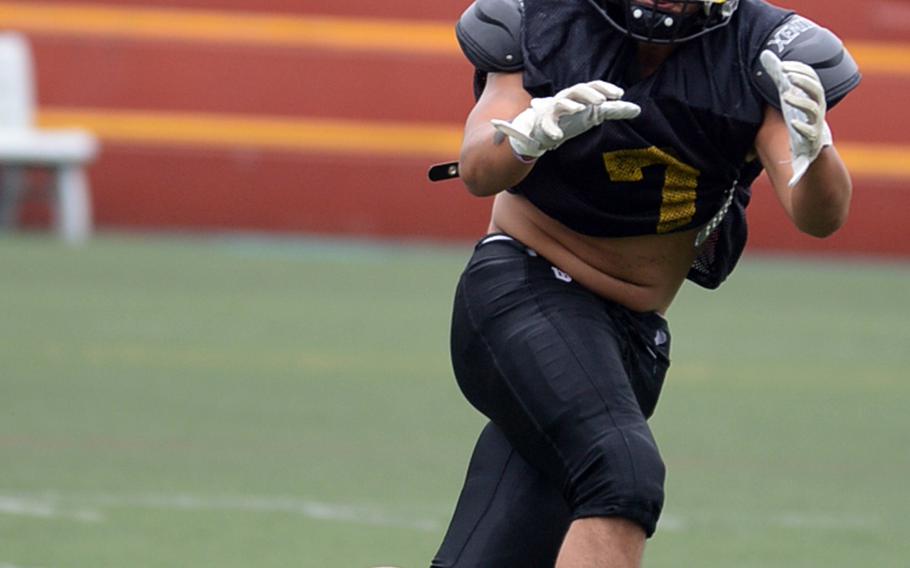 Junior Andrew Howe is one of several key skills-positions returners for American School In Japan football. (Dave Ornauer/Stars and Stripes) Senior Jo Tsusaka is one of several key skills-positions returners for American School In Japan football. (Dave Ornauer/Stars and Stripes) 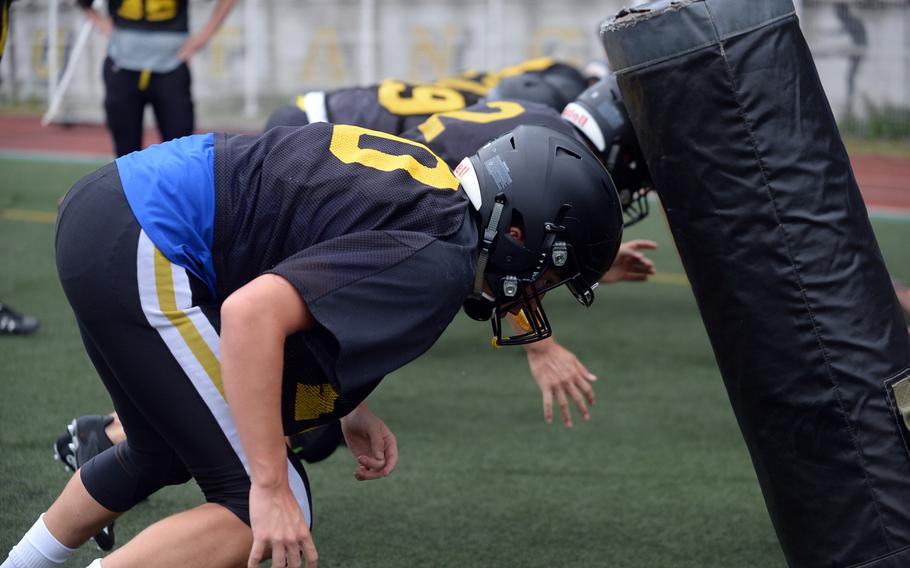 American School In Japan football's line has some big shoes to fill thanks to some key departures due to graduation. (Dave Ornauer/Stars and Stripes)

Last in a series of Pacific high school football previews.

TOKYO – With the school’s first Far East Division I title in the books and with a new coach taking over after the last one retired after more than three decades, what can American School In Japan football do for an encore?

The Mustangs got their bid off to a good start. After trailing 7-0 and 10-7 in the first half Saturday at Yokota, ASIJ rallied, scoring 27 unanswered points and got the first victory of the Roy Tomlinson era, 34-10.

“It’s a little different,” said Jack Ambrosino, returning at quarterback for his senior year. He headlines a team loaded with returning skills-positions players, but lacking some in the line after stars such as Stone Damon and Dalan Gerber turned their tassels at graduation last June.

“We’ll do our best,” said Tomlinson, who assumes the helm from John Seevers, who retired last December after 40 years with the program, 33 as head coach. “There’s only one 2017 team, and this is it. There was only one 2016 team, and they had their year. And now we move forward.”

ASIJ will move forward with a gaggle of backs, receivers and Ambrosino, who accounted for more than 2,575 yards and 30 touchdowns last season, capped by the Mustangs’ 35-18 D-I title-game win over Kadena.

“It’s nice to have them back,” Tomlinson said of the skills group, including running backs Jo Tsusaka, Jake Noddin and Andrew Howe and receiver Oliver Rogers. “Oliver is like a coach on the field. He’ll play anywhere we need him. He can do it all, and he works hard.”

It’s the interior, Tomlinson and some of the players said, that needs work. “Some big shoes to fill,” Tomlinson said.

Helping fill those gaps is Nash Rasmussen, a sophomore move-in from Utah who played rugby before arriving at Mustang Valley. “He’s learning how to play the game,” Tomlinson said. “The best thing about him is, he’s so coachable.”

Tomlinson referred to the entire Mustangs’ interior as “a work in progress. They’ll get better every week.”

Then, there’s the issue of facing Kadena, whom the Mustangs beat twice last season, both times at Mustang Valley. The Panthers visit ASIJ on Sept. 16, then the Mustangs travel to Kadena for a game Oct. 13.

And there’s Nile C. Kinnick, the defending DODEA-Japan and Kanto Plain champion. The Mustangs visit the Red Devils on Friday.

“They’ll be a tough out,” Tomlinson said of Kadena and Kinnick. “They always bring it, they’re very well coached. It’s tough sledding no matter where you go in this league.”

As for Tomlinson himself, he takes over a team for which he’s been offensive coordinator since his arrival in 2013 from Singapore American School.

Tomlinson is a 1986 graduate of West Point and was on the field for Army’s 45-31 Mirage Bowl win over Montana in 1984 in which the Black Knights became the first team to have four running backs with 100 or more yards in a game.

Tomlinson is also a cancer survivor.

“It still feels overwhelming,” Tomlinson said of filling the shoes of Seevers, who’s back in his native Nebraska. “He brought so much enthusiasm to the field. It’s certainly a challenge taking over for him. We miss him a lot.”