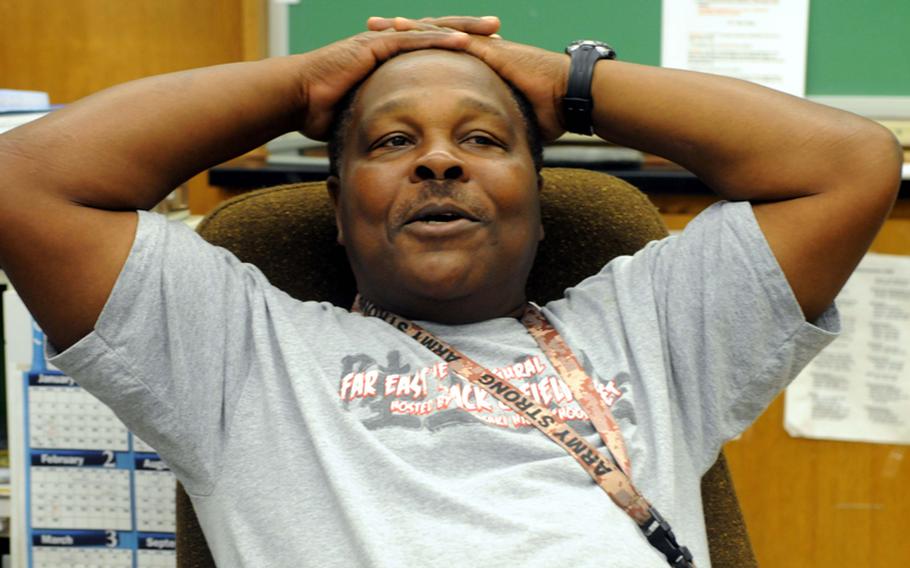 It could be argued that Charles Burns was the most influential figure in DODDS Pacific track and field history.

Coach of the Kubasaki High School team for 21 years, he turned the Dragons into an Okinawa Activities Council power before turning his attention to broadening the sport throughout the region.

He helped form the Mike Petty Memorial Meet in 2003, a tribute to the man who put track and field on the map on Okinawa before his death from cancer in 1992. And Burns later served as the driving force in what eventually became the first Far East High School Track and Field Meet in May 2010 at Kubasaki.

Now, Burns heads into retirement, flying next Tuesday to Sherwood, Ark., and he leaves, he says, with a broad sense of accomplishment, especially the last two years.&ldquo;What I did wasn&rsquo;t about me, I couldn&rsquo;t care less about the pats on the back for me, because what I did was for our kids,&rdquo; Burns said. &ldquo;And when I say our kids, I don&rsquo;t mean just the kids at Kubasaki. I&rsquo;m talking kids Pacific-wide.&rdquo;

It was something that began, Burns said, in 1988 when he and Petty arrived on Okinawa on the same flight. At that time, the site which later became Mike Petty Stadium was just an overgrown field and high school track didn&rsquo;t exist.

&ldquo;Mike was a stubborn old bull,&rdquo; Burns recalled. &ldquo;He said we needed a sports complex here, we needed track here and he obviously pushed the right buttons because eventually, Mike Petty Stadium came about, we got track and field.&rdquo;

Burns began as an assistant coach and took over when Petty died in 1992. Burns had coached track in Killeen, Texas, and said one of the things he had to deal with on Okinawa was track&rsquo;s perception as a &ldquo;second-class sport.&rdquo;

&ldquo;If a kid runs track, he runs track and it&rsquo;s just as important to him as soccer, playing golf, swimming or anything else,&rdquo; Burns said. &ldquo;It&rsquo;s the true honest sport. It&rsquo;s the original sport, dating back to 470 BC. Athens and Sparta. That&rsquo;s where the first track and field meets were held.&rdquo;

But as soccer held fast as the lone spring sport to have a Far East tournament from 1998-2009, Burns didn&rsquo;t cry about things; he did things.Aside from lobbying at every Far East Activities Council meeting for track to become a Far East sport, in April 2003, Burns and Kubasaki hosted a five-school invitational called the Mike Petty Memorial Meet, which over the years grew to as many as 360 athletes from 14 schools.&ldquo;That thing took off,&rdquo; Burns recalled. &ldquo;People were banging down doors trying to get to Mike Petty because it was the premier event for Far East track.&rdquo;

In 2007, the Kanto Plain Association of Secondary Schools added its own invitational, which became the season-ending meet until last year. In January 2010, DODDS Pacific director Diana Ohman told a meeting of her staff, &ldquo;Get &rsquo;er done,&rdquo; after which track, baseball and softball became Far East sports.

&ldquo;I felt like a proud dad,&rdquo; Burns said of when Far East track finally came along. &ldquo;Every milestone we went through, I kept saying we&rsquo;re doing something worthwhile, we&rsquo;re moving in a positive direction. And when Far East came along, other than getting married and the birth of my two sons, that was about the best occasion of my life.&rdquo;Far East track and field might have come along sooner, DODDS Pacific athletics coordinator Don Hobbs said.

But until 2009, only six DODDS schools had track teams; now, there are 10. And DODDS also realized cost savings the way it changed in November 2009 the ticketing and travel process for students to Far East activities, Hobbs said; and thus Far East tournaments were put on the grid for spring sports.

As to how Hobbs views Burns&rsquo; lobbying for Far East track, he said: &ldquo;He&rsquo;s a good friend. He&rsquo;s a solid person, citizen, educator and coach who consistently fights for what he believes in. He can argue and complain all he wants; he&rsquo;s doing it in the best interest of our student-athletes.&rdquo;

Those student-athletes say they&rsquo;re ever grateful for Burns&rsquo; presence.

&ldquo;He&rsquo;s a coach, father and mentor,&rdquo; Dragons hurdling specialist Milyka Dees said. &ldquo;Okinawa track will never be the same without him. All these years, he&rsquo;s worked so hard. He will truly be missed as a coach, teacher and friend.&rdquo;&ldquo;A very inspiring coach and man,&rdquo; sprinter C.J. Crenshaw said. &ldquo;He was a dedicated coach who ensured that our team was prepared to compete in every meet. Okinawa track and field will miss his sense of humor, professionalism and overall character that positively affected all who were in his company.&rdquo;

Burns, 60, is a retired Army reserve lieutenant colonel who has taught high school science and coached football and track for 35 years. He and his wife Joyce have two sons, Daryl, 34, and Kenneth, 30. He says he plans on coaching AAU teams in the area near his new home and possibly doing some officiating.