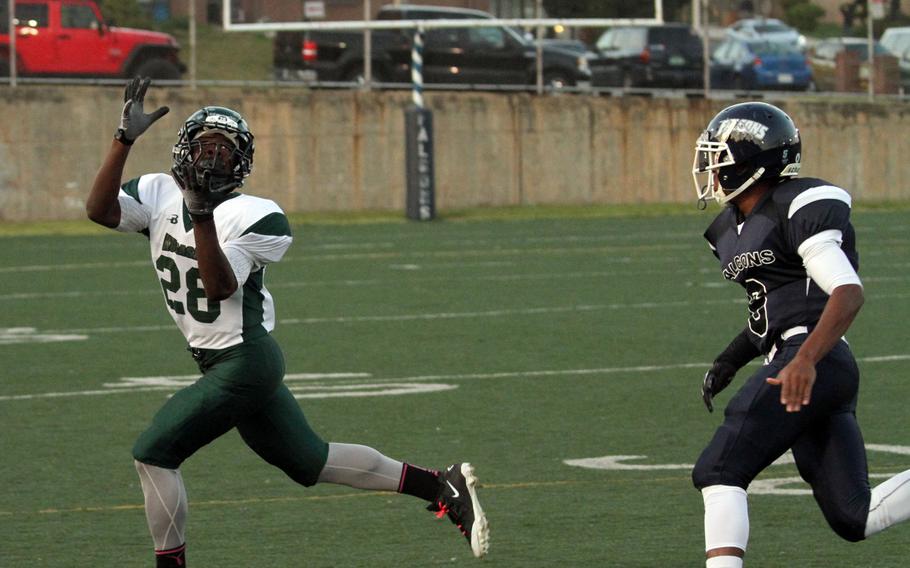 Kubasaki receiver Javohn Journigan hauls in a pass Oct. 4, 2014, ahead of Seoul American's Isiah Branch during a game at Yongsan Garrison, South Korea. (Joe Pak-Blyzniuk/Special to Stars and Stripes)

Kubasaki receiver Javohn Journigan hauls in a pass Oct. 4, 2014, ahead of Seoul American's Isiah Branch during a game at Yongsan Garrison, South Korea. (Joe Pak-Blyzniuk/Special to Stars and Stripes) 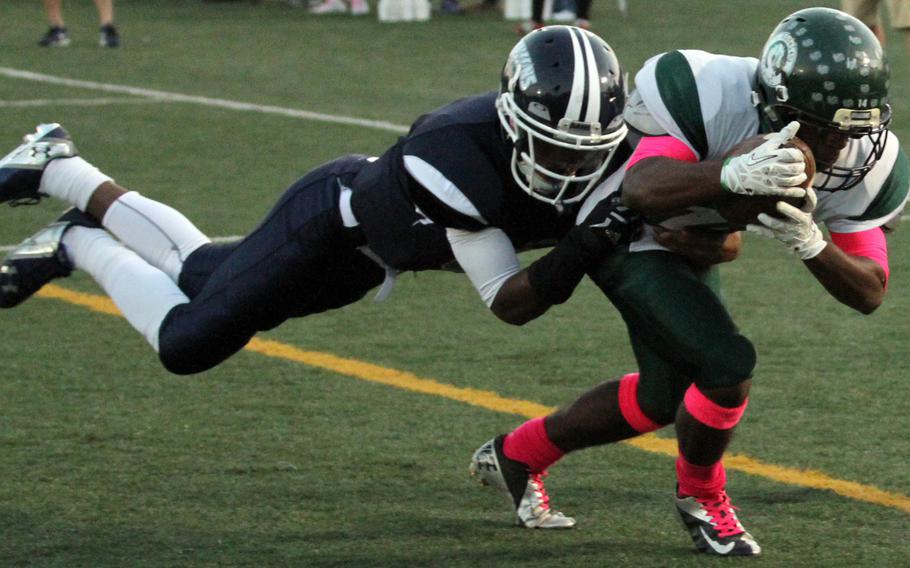 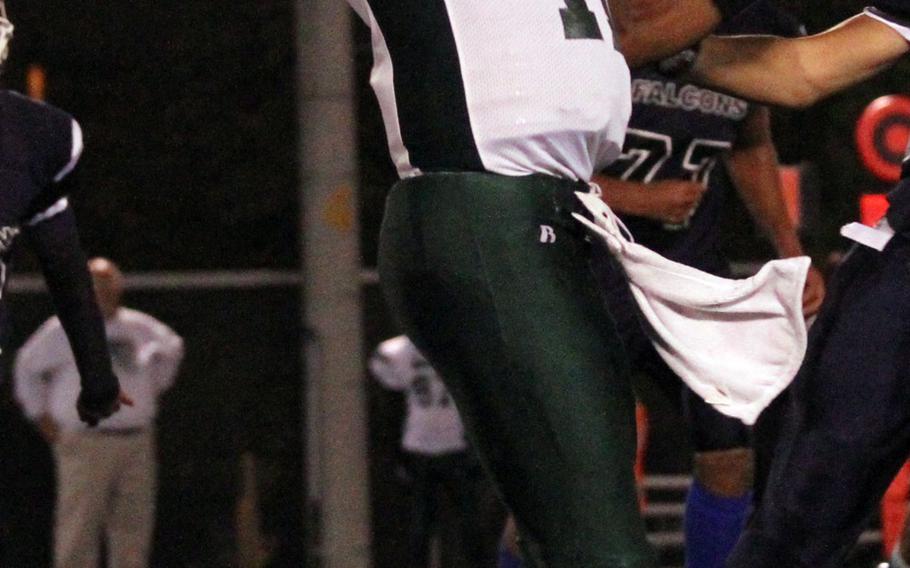 Kubasaki quarterback DeCurtis Davis gets off a pass Oct. 4, 2014, against Seoul American at Yongsan Garrison, South Korea. (Joe Pak-Blyzniuk/Special to Stars and Stripes) 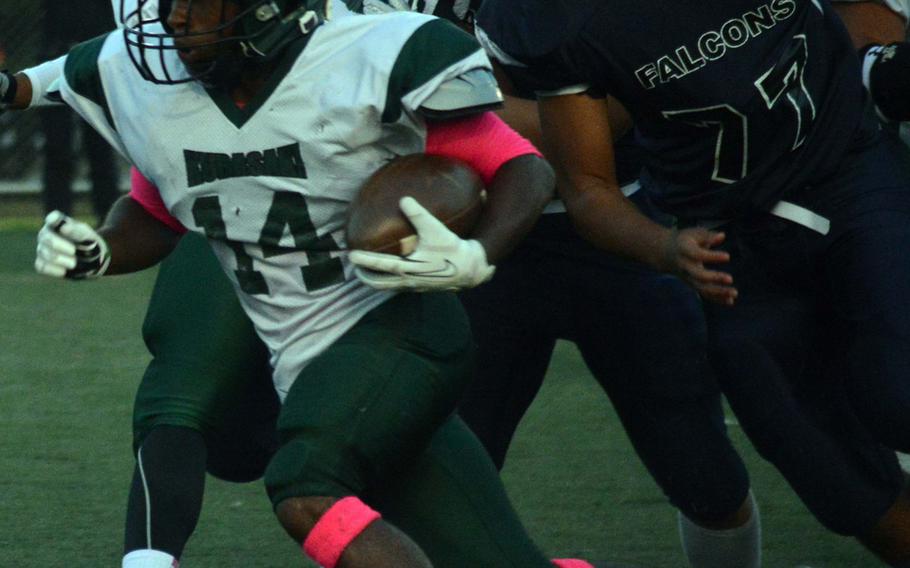 Kubasaki running back Winston Maxwell gets an escort from teammate Jacob Green. (Courtney Taylor/Special to Stars and Stripes) 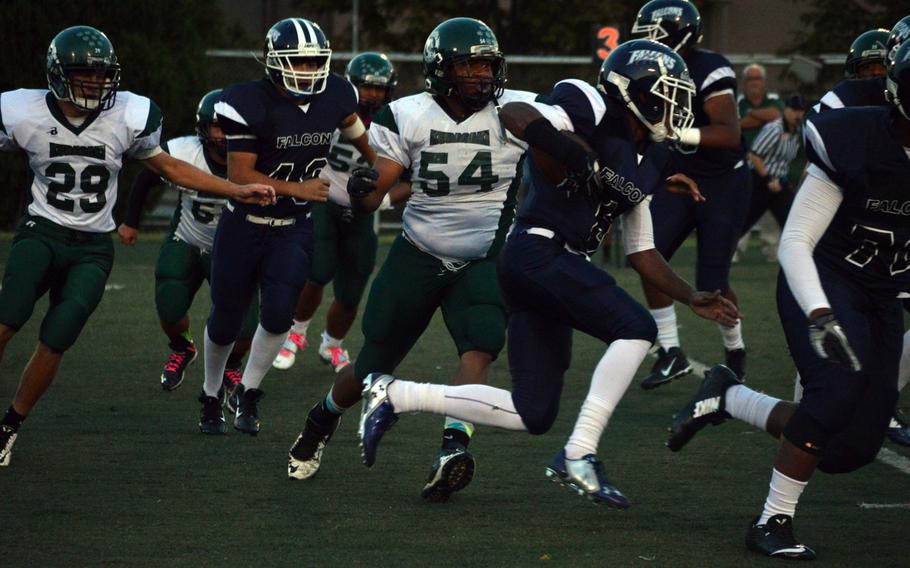 Seoul American running back Myles Haynes negotiates his way through teammates and Kubasaki opponents. (Courtney Taylor/Special to Stars and Stripes)

YONGSAN GARRISON, South Korea – With a rivalry game looming a week later, it might be easy for a team of high school football players to overlook the team in front of them, especially if that team has lost its last four games and has no shot at a title.

Kubasaki showed it was doing anything but looking ahead Saturday, getting key special-teams plays from Preston Snyder and Marcus Lee to help the Dragons to a 47-0 shutout win at Seoul American’s Sims Field.

“The most dangerous team you face week-to-week is yourself,” coach Fred Bales said after his Dragons improved to 3-1. “It’s always a goal to never beat yourself. And you always have to respect your opponents.”

With the win, the defending Far East Division I champion Dragons got within a half-game of unbeaten Nile C. Kinnick (4-0 overall, 3-0 D-I) in the race to host the D-I title game Nov. 8.

Kubasaki and Kadena play each other twice this year. But the two games count only as one game in the division standings, with the victor determined by scoring aggregate. A Kubasaki victory - or a loss by two points or less on Friday at Kadena would give the Dragons the win since they defeated the Panthers 28-25 last week. A Kadena win by at least four points would give the Panthers the win. A three-point Kadena victory would complicate matters even further. In any scenario, Kadena's game against Kinnick the following week will also play a role in which of the three teams reaches the finals.

Backed by another strong offensive performance by quarterback DeCurtis Davis, Kubasaki scored on its first possession against the Falcons (1-4, 0-4) and never looked back.

Davis was 17-for-24 for 171 yards, including three touchdowns on passes of 22 and 26 yards to Isaiah Johnson and 18 to Winston Maxwell. Davis also rushed for two touchdowns. Davis leads the Pacific in passing, 51-for-79 for 624 yards and 11 touchdowns.

Maxwell had his second triple-digit rushing game of the season, 162 yards on 16 carries. Javohn Journigan caught five balls for 38 yards and Johnson five for 46.

But the big plays, which Falcons coach James Davis called “backbreakers,” came on special teams. Snyder blocked a punt and returned it 30 yards to the 1, setting up a Davis TD run, and Lee returned a punt 38 yards for a score.

“We got off to a good start, things clicked and we were able to execute better than we’ve executed all season,” Bales said. “We made some plays in the kicking game that helped us. We played a complete game, eliminated some penalties that had been hurting us.”

A bright spot for the Falcons was Myles Haynes, who rushed for 104 yards on 12 carries. But the Falcons were shut out for the second time in three games this season.

“Blocked punt and punt-return touchdown. Backbreakers. Those are two whammies you don’t want to deal with,” Davis said.

Bales and the Dragons have treated every game since the season-opening 22-18 loss at Kinnick as life-or-death, and the Kadena game will be no exception, he said.

“You lose the first game of the season, every game is a playoff game (and) that’s the attitude we’ve been taking, absolutely,” Bales said.

The Falcons have a week off before hosting Daegu.