Korea's light when it comes to heavyweights 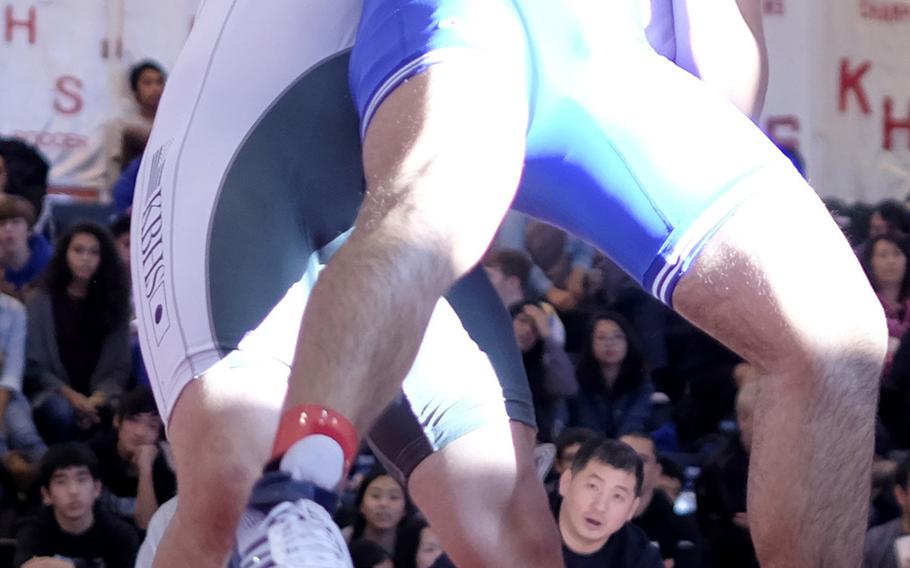 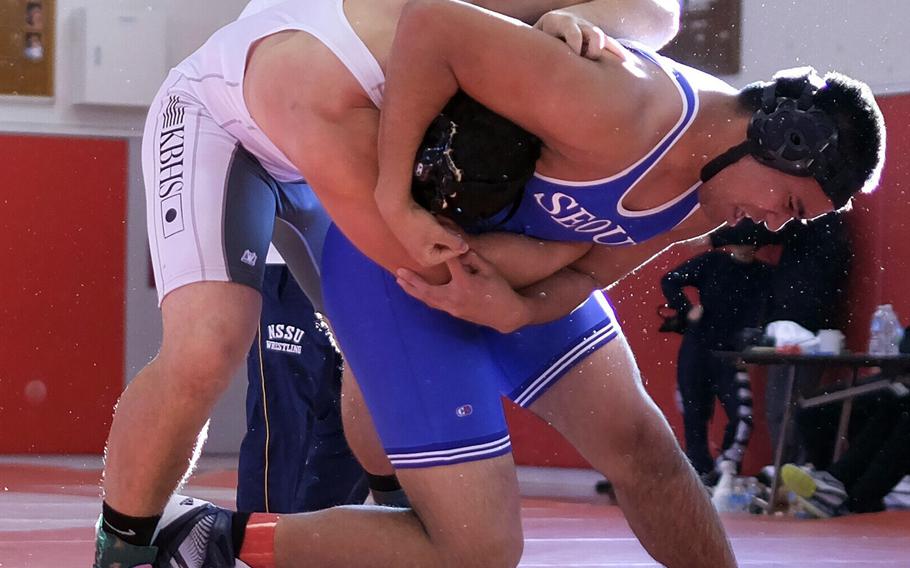 YOKOSUKA NAVAL BASE, Japan – All dressed up and nowhere to go. All ready to dance, but no partners available.

That’s the narrative for Sani Buckingham, a 6-foot-5, 275-pound behemoth of a heavyweight wrestler for Seoul American. Some observers tap him for success on the Far East Tournament mats next month. But he’ll have to overcome one big obstacle to find success.

Buckingham doesn’t have a single person to wrestle in his weight class when the Korea schools gather each week. So while the first-year wrestler’s desire to improve is there, the route to do so is a bit murky.

“It would be a lot easier. I’d have better practice and some good competition would be nice,” Buckingham said of a lack of foes before competing at the Nile C. Kinnick Invitational “Beast of the Far East” Tournament.

Buckingham, a senior who came to Korea last year from El Paso, Texas, has concentrated on football all his life before giving wrestling a shot this season. He already should have had three DODDS Korea in-season quad meets and as many as nine bouts before the “Beast.”

But while Osan, Daegu and Humpheys provide competition at some weight classes, the overall numbers in Korea are down. And unless there’s a swing in enrollments, that might continue to be the case.

Osan fields 16 wrestlers, coach Duke Allen said. That’s just under 10 percent of the school’s total enrollment of 176. The Cougars can cover every weight class except heavyweight. Daegu has seven wrestlers, coach Jeramie Lentz said; enrollment there is 173. Humphreys has 182 students, but only three on the mat, according to coach Eric Rogers.

It’s not that Korea has failed to ever field tough competitors at the heavier weights. But recently the numbers have been light.

Osan last had a heavyweight in 2011-12. The Cougars’ last Far East champion at that weight was two-time gold medalist Michael Gilliam (2009-10), who went on to play football at Occidental. Daegu’s last Far East finalist was Daniel Saintil at 215 in 2011.

Confessing to nerves before stepping on the “Beast” mats, Buckingham pinned his first foe in 22 seconds. But next came reigning Far East Tournament champion Christian Fernandez of Kubasaki. And the inexperience showed.

Buckingham repeatedly tried to lock in head-and-arm throws on Fernandez, who easily parried the attempts and countered with moves Buckingham hadn’t seen before – scoring two-point takedowns in the process.

The bout ended in a technical fall with Fernandez leading 11-0 in 2 minutes, 31 seconds.

“I need to broaden my skills set,” Buckingham said. “Try things other than throwing. It seemed like the most effective thing for me. I have to work on other things.”

Buckingham went on to pin his next two opponents and captured second place in the “Beast.” Fernandez and other observers see Buckingham as somebody who could do good things down the road with more preparation.

“I feel pretty bad, actually,” Fernandez said. “I wish they had more schools for people like that (to wrestle), but he doesn’t. So what can you do?”

Buckingham practices with heavyweight Connor Knight, a junior varsity teammate, as well as reigning Far East 215-pound champion Jack Barnes. And Pak, who has connections in town, has Buckingham work out against Korean college and club wrestlers.

“We try as a team to push him and get him to work harder and we have some volunteer coaches who come in and work with him,” Pak said. “He’s a smart kid, he knows what moves he can do and what moves he can’t. So we try to focus on his strengths.”

Had the others schools had heavyweights, Pak says he feels Buckingham would be a worthy opponent for Fernandez by season’s end. As things are, he said, “I expect him to go maybe the semifinals. Anything more, I’d be pleased.”