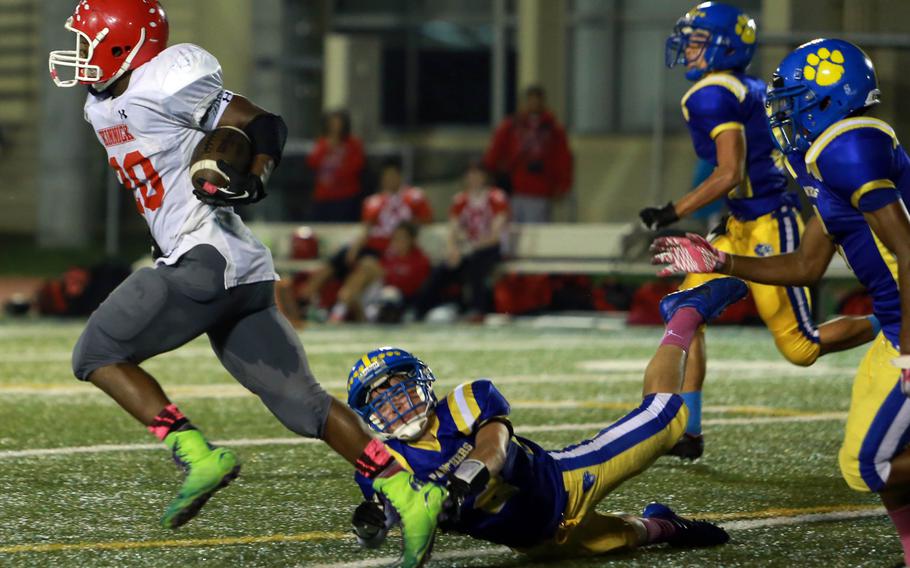 The Red Devils junior rushed 27 times for 445 yards and all five Kinnick touchdowns, leading the Red Devils to their first victory at Yokota since the 1998 season opener, a 36-23 triumph Friday.

Paylor also broke his own DODDS Japan record of 371 set last season, when he became just the second Pacific rusher in history with 2,000 yards. The 371 also came against Yokota, in a 55-27 win over the Panthers last Sept. 6.

“I couldn’t have asked for a nicer person to break the record,” Joley said. “I love Dre. He’s been a workhorse, a real team leader. As a unit, everybody works hard to get Dre the yards, but Dre appreciates the team aspect of it.”

“The kid’s a special runner,” said Yokota coach Tim Pujol, adding that he thought “over half” of Paylor’s yards came after first contact. “To his credit, he broke tackles and got more yards. Strength, acceleration, speed, a good combination to have.”

Friday’s victory was Kinnick’s first at Yokota since shutting out the Panthers 16-0 on Sept. 5, 1998.

“It was one of the most fun games I’ve been a part of since I came to DODDS” six years ago, Joley said. “Two hard-hitting football teams going at it toe-to-toe, good offenses, a couple of good coaching staffs. We couldn’t stop each other. A slugfest, absolutely. Well executed by everybody out there. It was like a chess match.”

Paylor, who has 1,224 yards and 17 touchdowns this season, helped Kinnick burst to a 23-7 lead with touchdown runs of 80, 1 and 2 yards. The Red Devils also got a safety when a Yokota punt snap sailed out of the end zone just before halftime.

The Panthers cut it to 30-23 in the fourth quarter, recovered an onside kick and drove to Kinnick’s 2-yard line, where the Red Devil defense held on fourth-and-goal. That and Paylor’s 85-yard scoring run proved to be the game’s turning point.

With the win, the Red Devils (5-0) boosted their Division I lead to a full game at 3-0 over 2-1 Kubasaki, the defending champion, and Kadena. Kinnick also leads the Kanto Plain and is closing in on its second straight DODDS Japan title.

Next comes a visit to American School In Japan on Friday, followed by an Oct. 18 game at Kadena, which could decide which team hosts the Far East Division I title game Nov. 8.

For the Panthers, Shota Sprunger rushed for 212 yards and two touchdowns on 20 carries and had 82 yards on three returns. DeCorio Perry had 54 yards on nine carries, 41 yards on two returns and an interception. Marcus Henagan had 136 yards and a touchdown on seven carries and was 3-for-5 passing for 35 yards, all the Sprunger. Jamarvin Harvey added 62 yards on 13 attempts.

For Yokota (1-4), a home game with Zama follows on Friday, with the season ending Oct. 24 at Robert D. Edgren.

“No matter how your season goes, everybody always feels better when you try to finish on a high note,” said Pujol, alluding to the possibility that Yokota might play at the Division II level next season. “We’re going to look ahead at the next two games as a beginning and an end of sorts. May be a bit of a prelude to what comes in 2015.”